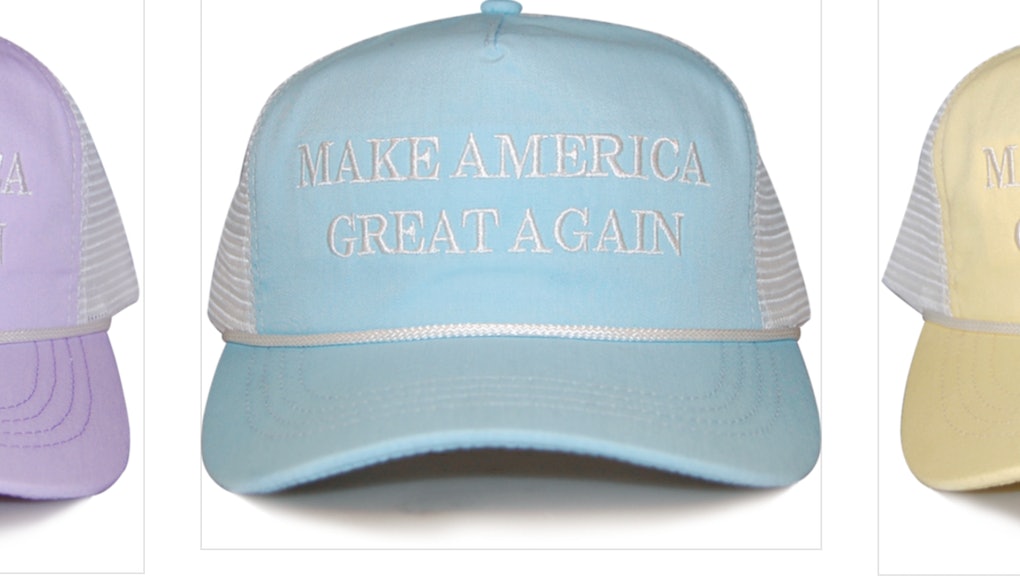 Donald Trump’s spring-edition MAGA hat costs twice as much as the original because why?

Forget the Paris runway. The latest in spring fashion, at least for a certain set, can be found via the Trump-Pence team's recently launched spring edition of its Make America Great Again hats.

The "limited one-time run" made largely out of mesh (unlike the original) comes in three new colorways — light blue, yellow and lavender — and retail for $50 each, twice the cost of the original hat's $25 price tag.

"Celebrate spring in style in these limited-edition hats while showing your friends and family that you're on the Trump Train," read an official email from Team Trump-Pence.

The email went on to boast about Trump's job creation efforts. "For too long, we've punished production in America and rewarded companies for leaving our country — it's time to reverse that. President Trump has already taken historic action to unleash job creation, signing dozens of bills and executive actions to reduce federal overreach and expand domestic production."

The irony — as Mic previously pointed out — is that Trump's wife, Melania Trump, and daughter, Ivanka Trump, have strong penchants for wearing European designers. Melania Trump even made waves earlier in April for wearing Italian designers Dolce & Gabbana for her first official White House portrait.

But enough about hypocrisy: Back to the hats which Trump family members, even the GOP's official Twitter account are hawking.

Anyone with $50 — plus shipping — who's looking to get their head tucked between one of these hats can visit the official site. But you better act fast, as Trump's green St. Patrick's Day themed hat is already sold out. Sad!