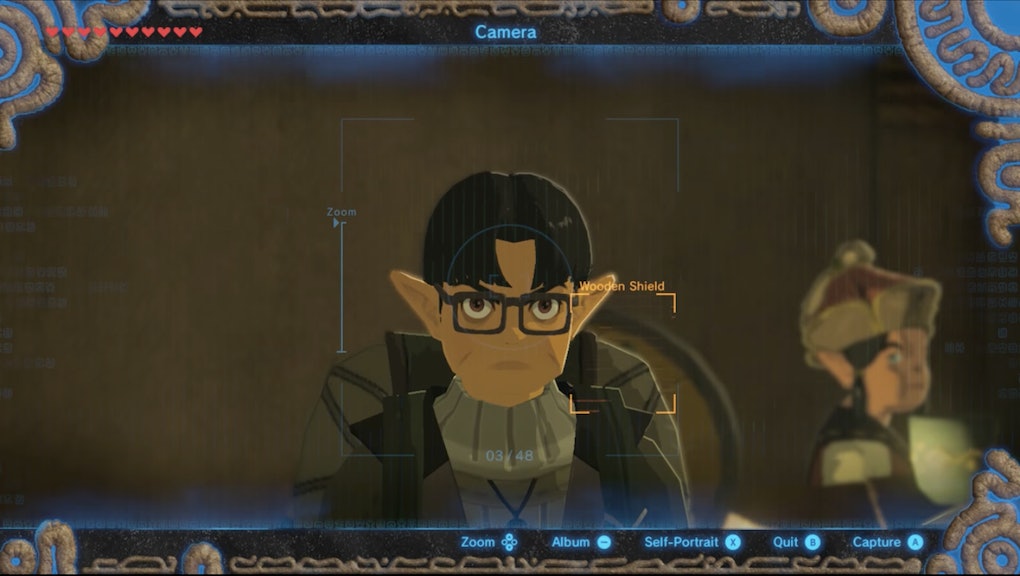 'Zelda: Breath of the Wild' Easter Egg Guide: Nods to characters, past games and Iwata

Although Legend of Zelda: Breath of the Wild's place in the Zelda timeline is a subject of dispute, there are a ton of Easter eggs that Nintendo put into the game, along with the various inevitable nods to the Zelda mythos like the Hylian Shield and the Master Sword.

If you're curious about the wide world of Breath of the Wild's Hyrule, or just looking to take a break from saving the world and taming horses, check out some of these neat Easter Eggs. After all, it's about the journey, not the destination, where Zelda's concerned.

Zelda: Breath of the Wild Easter eggs: Check out the ruins of Lon Lon Ranch and a secret statue inside the Temple of Time

The landscape of Hyrule is dotted with all sorts of throwbacks to old Zelda games, but one, in particular, is pretty unmistakable to fans of Ocarina of Time. In central Hyrule, there's a location on your map marked "Ranch Ruins" that is pretty clearly intended to be Lon Lon Ranch. User BeardBear has a pretty good comparison up on Youtube, including an aerial view of the track and a side-by-side comparison.

Additionally, inside the Temple of Time ruins, you can make your way to a glowing statue of the Goddess inside, and fans of Skyward Sword should notice that the figure is very reminiscent of the Statue of the Goddess on Skyloft from that game. To get a closer look at it, check out Nintendo World Report's coverage below.

Zelda: Breath of the Wild Easter eggs: There's a twofold reference to Satoru Iwata in the game

Although it's been two years since Nintendo president Satoru Iwata passed away, he was apparently instrumental in the design of the Nintendo Switch. As part of a tribute to the beloved Nintendo exec, there are two references to Iwata in Breath of the Wild.

First, there's an NPC who wanders the roads of western Central Hyrule named Botrick who IGN alleged looks very similar to Iwata, right down to the haircut and square glasses.

However, that's not all. If you talk to Botrick, he'll let you in on some sweet details about the Lord of the Mountain mount. Although it's tempting to ride it as soon as you encounter it, snap a picture of it with your Sheikah Slate first. Doing so will get you a note about the Lord of the Mountain — namely that legend states it's the spirit of a sage who used to reside on the mountain: the sage Satori.

For those who don't study Japanese, "Satori" is a Japanese word for Enlightenment, and comes from the verb "Satoru" — Iwata's first name.

Zelda: Breath of the Wild Easter eggs: Classic costumes are available with Amiibos

Although you can get a Breath of the Wild-themed take on Link's iconic green tunic by beating all 120 of the game's shrines, you can also use Amiibos to get classic tunics from Ocarina of Time, Twilight Princess and the original Legend of Zelda. Family Games on Youtube has the full sets for each:

It's worth noting that there's no way to get the Fierce Deity costume or the Skyward Sword outfit without datamining currently, so unless you fancy doing that, you've no way to access those until Nintendo releases their (presumably) upcoming Amiibos.

Zelda: Breath of the Wild Easter eggs: Locations are named after characters in previous games

Breath of the Wild's Hyrule has a ton of locations to visit, and according to IGN, here are just a few of the locations that are named after characters and places in the previous games:

The Arbiter's Grounds - a dungeon in Twilight Princess located in the Gerudo DesertBonooru's Stand and Pierre Plateau - the names of the two scarecrows in Ocarina of TimeCrenel Hills - a mountain region in The Minish CapEagus Bridge, Horwell Bridge, and Owlan Bridge - the names of instructors in Skyward SwordGleeok Bridge - a recurring enemy in Zelda gamesGoponga Island, Kanalet Ridge, Mabe Village Ruins, Martha's Landing, Tal Tal Peak, Tabhal Woods, Ukuku Plains, and Koholit Rock - all areas named after places on Koholint Island in Link's AwakeningHoron Lagoon - named after a town from Oracle of SeasonsKaepora Pass - the name of an owl who guides Link in several gamesLinebeck Island - named after Link's friend from Phantom HourglassLulu Lake, Mikau Lake, Toto Lake - named from the Zora Band in Majora's MaskMido Swamp, Lake Saria - named after the Kokiri children from Ocarina of TimeMount Daphnes - named after the King of Hyrule from The Wind Waker

Our personal favorite is that rules stickler Mido gets his name attached to a swamp. Who's not allowed to see the Great Deku Tree now, hm?

Additionally, all four of the Divine Beasts in Breath of the Wild are named after characters from previous Legend of Zelda entries:

Not sure how anyone would have guessed that Rudania was an anagram for Darunia, but we buy it.

All in all, that's just a small taster of the references and nods to previous games that are in Breath of the Wild. It's a big, open world, so you should take a little time to find some of your own. Who knows what you'll turn up?