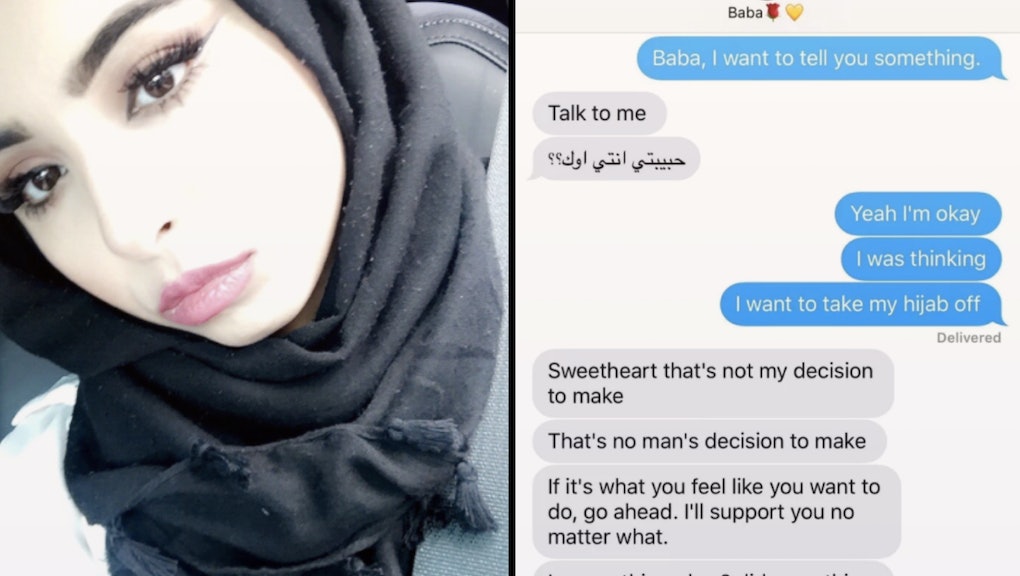 In a group chat her friend started to discuss politics, Lamyaa — a 17-year-old from Saudi Arabia living in Pennsylvania — addressed some of her concerns of President Donald Trump, as a Muslim living in the United States.

Lamyaa said in the group text how Trump does not speak for Muslim Americans, Latinx, people of color or women.

"He has insulted almost every group of people other than straight white christian males," Lamyaa texted. "How do you expect me to stand up for and respect a man that has done nothing but dehumanize everyone that doesn't look like him?"

One member of the group chat, a white non-Muslim male, responded to her remarks by claiming that her father would "beat her ass" if she decided to stop wearing the hijab.

"Stop defending islam bitch shut up you couldn't take that scarf off or your dad would beat your ass," the text read.

His response rejects the idea that women — Muslim or non-Muslim — sometimes have a choice. But this type of retort isn't particularly new for Lamyaa. She would usually shrug off the hate, but this time she wanted to take the opportunity to break down the negative stereotype of Muslims. So she texted her father to let him know that she was thinking of taking off her hijab.

"Sweetheart that's not my decision to make," her father texted. "That's no man's decision to make. If that's what you feel like you want to do, go ahead. I'll support you no matter what. Is everything ok? Did something happen?"

Lamyaa screencapped her father's texts and decided to tweet them publicly to shatter the misconception that Muslim men are somehow more oppressive towards women. Right now, it has over 144,000 retweets and over 316,000 likes.

The response to Lamyaa's tweets were overwhelmingly positive.

A few, however, said that her father's responses is the exception and not the norm.

But Lamyaa said her message was not to deny the fact that some women are, in fact, forced to wear the hijab. Instead, she wanted to dismantle the falsehood that all Muslims are inherently misogynist.

"Yes, a lot of women are forced to wear the hijab," Lamyaa wrote in a tweet. "That's horrible and I have been one to point that out numerous times. That oppression however isn't what the hijab symbolizes, it's not why women wear it."

In an email interview, Lamyaa pointed out that there was a hypocrisy in the way non-Muslim individuals — especially, conservatives — in the U.S. claim to care for women's rights as justification for their perceptions of Muslims as misogynists. This was certainly the case when the U.S. attempted to justify the war in Afghanistan by bringing up the Taliban's oppression of women. But their sudden interest in protecting the rights of women in the Middle East doesn't seem too sincere to Lamyaa considering America elected Trump, someone caught on the record as a misogynist.