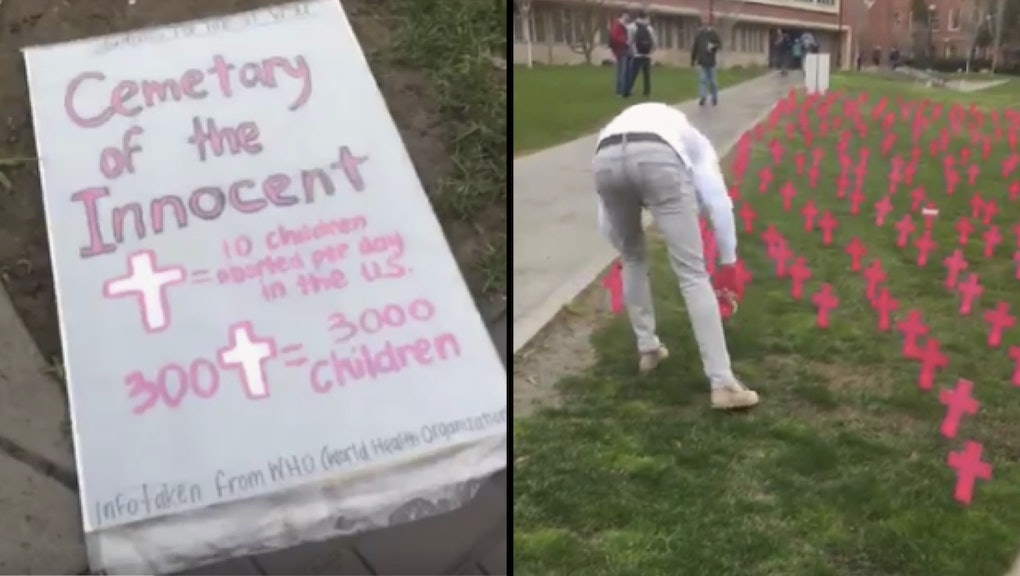 When he noticed an elaborate anti-abortion display taking over a campus green space, one Washington State University student got mad — and then he got moving.

In a video his fellow student posted to Twitter, Keaton Aspell can be seen systematically dismantling a mock graveyard, plucking up rows of small pink crosses meant to symbolize the tiny tombstones of terminated fetuses.

"I walked down through the grass and turned," Aspell told the Daily Evergreen. "Then I saw the signs and my jaw dropped."

The sign that really ground Aspell's gears said "Cemetery of the innocent," and explained that each of the 300 paper crosses staked in the ground stood for 10 "children" aborted daily in the U.S. In a Facebook message, Aspell said it took him about five minutes to take down all the crosses, set up by WSU's Students for Life chapter.

The display upset him because of its potential to shame certain students, he explained.

"I was angry because I have a friend who had an abortion and I couldn't have imagined how she'd feel seeing this," Aspell wrote. "That made me think about how many other girls may have gone through the same thing. ... We're all at school to learn — no girl should feel ashamed for making a personal decision so that she is able to continue her education."

"There was nothing beneficial or productive about the display," he added. "Nobody left more educated on how to stop unwanted pregnancies and stop abortions, which I believe is the end goal of the Students for Life."

Members later replaced the signs, and Aspell returned to remove them a second time. He got about halfway through his task before a campus police officer showed up and warned him that his actions could qualify as destruction of property. Aspell stopped, and instead went to visit various deans. He wanted to know how the display had been approved in the first place.

Stunts like these are rare on WSU's campus, Aspell explained. He doesn't believe Students for Life intended to shame anyone. They maybe "weren't aware of the effect it could have on women who have gone through abortions," he said. Response has been mixed: Some students who are anti-abortion rights have been sending him angry messages, while other students have shared their stories.

"I've received countless private messages from men and women who have experienced the effect an abortion can have on someone first-hand thanking me because of how they were affected by the display," Aspell said. "I even had a girl tell me she walked on to campus, saw it and went home for the day crying because she'd gone through an abortion and the display brought up so much emotion and made her feel so guilty."

The cemetery dismantling may recall a similar incident at Texas State University, in which a man who went ham on some anti-abortion propaganda displayed on campus. Mic has yet to identify that culprit, but in a viral video, he can be seen methodically setting down the flowers, balloons and backpack he's carrying before absolutely ravaging a set of sandwich boards covered in graphic fetal imagery.