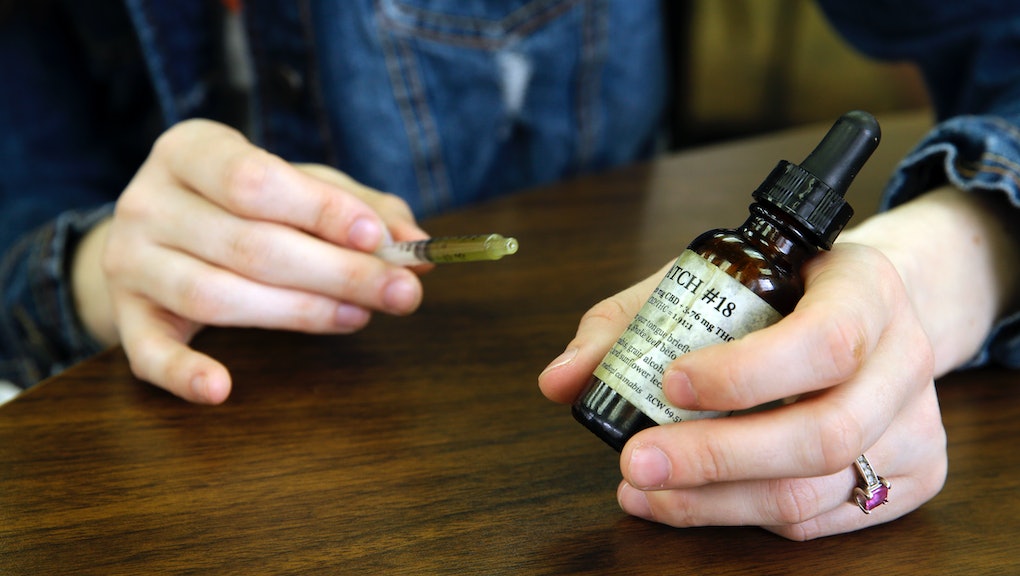 Four minutes. That was how long John Barclay had to watch his daughter's seizures before he could rectally administer a pharmaceutical drug and gauge if she was still breathing.

"I'd be looking at the clock, holding my head," Barclay said in a phone call.

From invasive procedures to harmful side effects, pharmaceutical drugs have largely come up short for Barclay's 7-year-old daughter, River — affectionately nicknamed "Ducky" — who began developing frequent and severe seizures in 2014. That's why the Washington family turned to the cannabis-derived compound cannabidiol, or CBD.

When Barclay squirts CBD oil into River's mouth during a seizure, she's often better in under a minute — and she isn't crying and in pain when she comes to, like before.

"It's a night-and-day difference in recovery," Barclay said.

He gives River CBD throughout the day, too, often mixed into cookies or apple sauce. The oil, which Barclay produces himself, vastly reduces the number and intensity of River's daily seizures.

For this Washington dad, medical marijuana is "liquid gold."

But not everyone sees it that way.

Despite medical marijuana being legal in 28 U.S. states, students by and large are forbidden by law from taking it on school grounds. Only a small handful of states have made it legal for kids to take medical marijuana at school, and Washington isn't one of them.

Barclay isn't allowed to meet River in the nurse's office to give her a cookie or applesauce with CBD, so he has to pull his daughter out of school midday.

"I want to avoid having to take her out into the cold, out into the rain — out," he said. "In a perfect world ... River goes and gets her stuff at noon just like every other kid with medication."

With House Bill 1060, Washington tried to make it happen.

Barclay and Meagan Holt, a nonprofit director who says her 4-year-old daughter Maddie has surpassed her life expectancy thanks to cannabis, worked with state legislators to push the bill. Nicknamed "Ducky's Bill," the bipartisan proposal would have allowed parents or guardians to administer students' medical marijuana on school grounds, on school buses and at school-sponsored events.

Introduced in January, the bill sailed through the House — but its journey ended in the Senate in April.

For Holt, the news was "devastating."

"They need to take a step back and realize what kind of damage that's causing," she said in a phone interview Thursday. "Maddie and I have to spend another year at home watching 20 other kids getting on the school bus and going to school."

Washington Rep. Brian Blake, who sponsored the bill, thinks he knows why it failed. "I think it simply came down to that it said 'marijuana in schools' in the bill title," he said over the phone Monday.

"So many people are focused on 'medical marijuana in schools' that I think they've lost sight that this is really about children, and making sure they can stay in school and have access to education professionals," he said.

Blake is "confident" they'll be able to pass a bill next year — with different language in the proposal. Until that legislation passes, Blake said he "can't imagine" the pain families are feeling.

"For them to have a therapy that seems to be working and not being able to fully access that to keep the child in school, it's got to be frustrating," he said.

Don't just take these families' word for it. A 2015 study by researchers at New York University's Langone Medical Center tested CBD's efficacy at managing treatment-resistant epilepsy in 214 patients, and found that patients' monthly motor seizures went down by a median of 36.5%.

"We are very encouraged by our trial results showing that CBD was safe and well-tolerated for most patients, and that seizures dropped significantly," lead researcher Orrin Devinsky said in a release.

In a different study, 83 adults with cerebral palsy were asked to indicate the pain treatments they used and rate their effectiveness. Marijuana was rated the most effective pain reliever, though admittedly less than 5% of study participants reported using the drug for pain management.

In Washington, Blake is determined to get the legislation through state legislature. "It's unfortunate we're going to have to wait a year to do that, but I'm open to any path that allows these kids to stay in school for the full day," Blake said.

Barclay is in it for the long haul, determined to keep fighting for the rights of students, like River, who depend on medical marijuana for their well-being.

"I consider myself the adoptive parents of those kids to get their quality of life as good as possible," he said, adding that he already has "other things planned after this passes."

That was also the case for Stacey Linn, the fiercely determined mom who helped bring medical marijuana to schools in Colorado. Her son Jack used the compound cannabinol, or CBN, to manage his cerebral palsy with severe dystonia — involuntary muscle contractions that caused his body to become distorted.

Countless parents of kids who use medical marijuana have thanked Linn, saying their youngsters can finally go to school now.

"Some of them weren't even able to go to school before marijuana," Linn said in a phone call Tuesday. "Now that they can — and they can do it without hassle — it's a good deal."

Jack died in August. Now Linn is carrying on his legacy, working to create a state marijuana database that doesn't just focus on prevention among teens, but also educates about the properties of medical marijuana. From there she hopes to build a special curriculum for schools to teach students about medical marijuana, the same way they're taught sex-ed.

"People stop me in the hall at the Capitol all the time and say, 'Thank you for everything you and Jack did. Jack made us all look at everything differently,'" Linn recalled.

"I've been continuing his work," she said. "It's almost like he called me to do that."