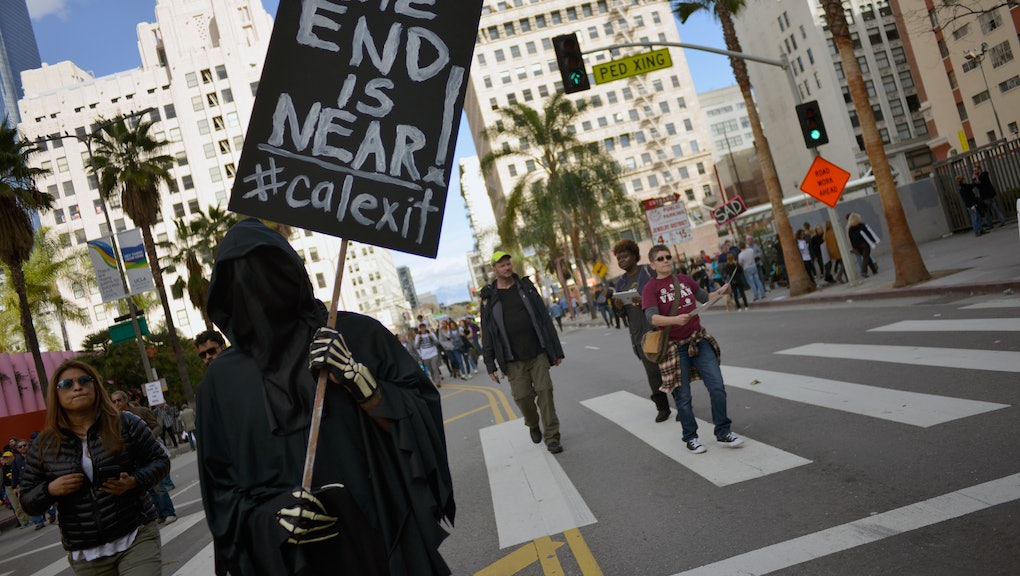 Louis Marinelli, the right-wing activist leading California's secessionist "Calexit" campaign, announced on Monday he is through with the U.S. entirely and "intends to make Russia [his] new home."

In a lengthy statement on the website of Yes California, Calexit's referendum campaign, Marinello wrote his "personal struggle against the United States government has ended" now that his spouse has successfully secured a green card, and "I have found in Russia a new happiness, a life without the albastross of frustration and resentment towards ones' homeland, and a future detached from the partisan divisions and animosity that has thus far engulfed my entire adult life."

Marinelli added, "Consequently, if the people of Russia would be so kind as to welcome me here on a permanent basis, I intend to make Russia my new home."

Marinelli further announced he is withdrawing the Calexit petition from circulation, and writing others in the movement could begin collecting new signatures to put the measure on an upcoming ballot.

And, like that, Calexit is done — though it never really came close to gathering the 585,407 valid signatures necessary to get it on the ballot in the first place.

The announcement is likely to spur interest from those following the ongoing House, Senate and FBI investigations into President Donald Trump's rumored collusion with the Russian government during the election. Marinelli's links to Russia have engendered speculation that the same type of nefarious plotting is behind his strange effort to have California leave the U.S.

The Yes California movement previously opened up what they referred to as a "cultural center" in Moscow in conjunction with the Anti-Globalization Movement of Russia, a tiny Kremlin-funded movement supporting secessionist movements around the world. As Snopes noted, Marinelli freely admitted to living part-time in both Russia and San Diego, though he denies any connection between the Calexit movement and the Russian government.

As Business Insider noted, Marinelli has been organizing the Calexit campaign remotely from the Russian city of Yekaterinburg since September 2016.

Marinelli wrote the widespread rumors swirling around Russian interference in the elections are "hysteria," adding that allegations both he and the president are Russian agents will one day be proven false.

"When that day finally comes, as it will, I shall look forward with great satisfaction to return to California and to live once again under our bear flag," Marinelli concluded the announcement.

The Calexit leader isn't the only right-wing figure in the U.S. to determine he would be better off in Russian employ. Lee Stranahan, a former writer for far-right website Breitbart, announced in early April he would be heading a radio show for Russia's state-funded Sputnik network.