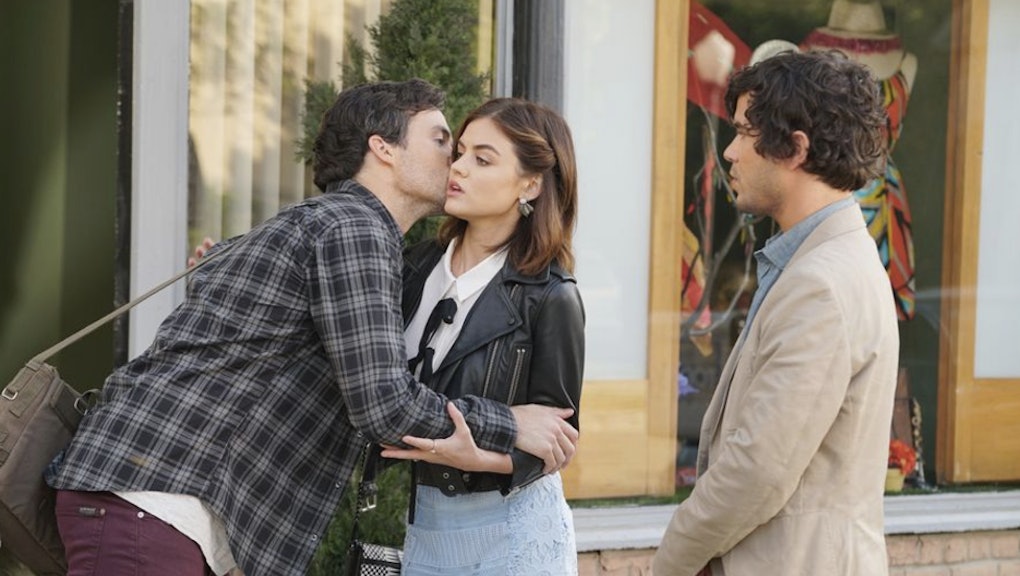 Danger — life-threatening, and sometimes life-ending — was always the key plot point on Pretty Little Liars. But even while running for their lives and fighting the anonymous evil that was after them, the Liars still found time for romance, and a lot of it. Between classmates, neighbors and even teachers, Aria, Emily, Hanna and Spencer fell in and out of love in between texts from the evil "A." Some of these couples seem meant to be, while others never should have happened at all. Below are the major Pretty Little Liars relationships.

Aria and Ezra — The Worst

Last season saw Aria and Ezra reunite professionally when they co-authored a book, as well as personally when the book's success rekindled their romantic spark. Ezra even proposed to Aria, but their future was left uncertain when his ex-girlfriend Nicole, who he thought was dead, turned out to be alive.

While this romance has earned some fans shipping the couple with the name Ezria, to others, their relationship was wrong from the beginning. Ezra was Aria's teacher, in his 20s while she was 15 or 16, a fact that was hardly even addressed — even by Aria's parents — until the most recent season, when Aria's new boyfriend discovered the truth about her past. Instead of being the voice of reason, he was depicted as unreasonable and jealous. The show portrayed the two artistic book-lovers as tortured "soulmates," and everyone who objected to them being together was just another obstacle in a doomed romance that made them staying together even more of an accomplishment.

Hanna and Caleb — The Best

These two had amazing chemistry right from the start as they engaged in a sort of modern-day, teenage Katharine Hepburn and Spencer Tracy sparring. Their love story was heartwarming: they fell in love when Hanna was just being the kind, warm-hearted person that she is by letting Caleb sleep in her basement after she learned he was homeless. Their opposite personalities attracted them to one another and they joined forces, teaming up against A. She also encouraged him to get to know his family while he helped her fight the anonymous evil that was torturing her. And, in between, they seemed to actually have fun together.

These two seemed perfect for each other at first: the daughter of the preppy, over-ambitious perfectionist family rebels by dating the down-to-earth, plainspoken woodworker who saw through her over-caffeinated exterior. Their first kiss happened after an intense game of Scrabble. Who couldn't love that? They respected each other's quirks and didn't try to change each other and their loyalty was so deep, they even joined the A team to help each other out.

But the secrets got too intense: Spencer even ended up in Radley Sanitarium when she thought Toby had betrayed her and then died. And when Toby became obsessed with learning the truth behind his mother's death, he made her choose between him and her friends. That's a classic no-no in Rosewood.

Shown through flashbacks, this dynamic was unhealthy from the beginning. Emily's quiet adoration of Alison was intense, and Alison took it for granted, flirting with Emily when she needed an ego boost and cruelly rejecting her when she wasn't necessary to whatever agenda Alison had at the moment. Alison seemed reformed when she returned to Rosewood, but who knows what her motives are regarding Emily? It doesn't seem like she even knows herself.

This was just way too intense, right from the beginning. You should never date someone who's tried to drown you, Emily. Paige was much to possessive of Emily, encouraging her to apply to the same college, planning on them living together and going as far as secretly hiring a swim coach to help Emily recuperate from her injury when it looked like Emily couldn't swim her way into college.

Emily's attraction to Maya helped her acknowledge her sexuality and come out to her friends and family. But Maya was a complicated person, and being involved with her was a lot for someone to handle in her first serious relationship. Before her tragic conclusion, Maya disappeared on Emily more than once. She did apologize, but Emily deserved someone who was more stable.