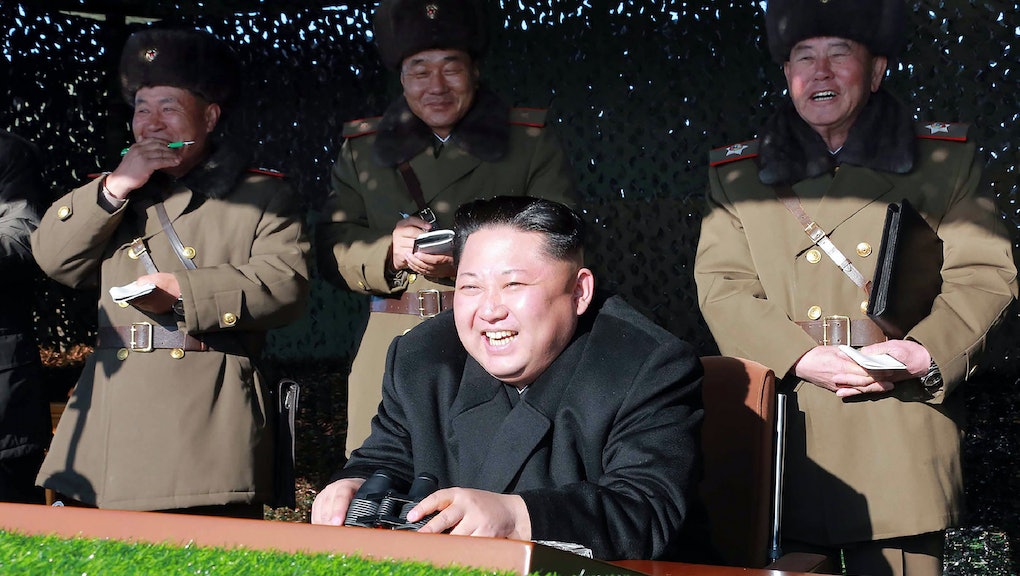 Tensions remain high on the Korean peninsula following fears that "thermonuclear war may break out at any moment" between North Korea and the United States.

After a military parade Saturday to mark the "Day of the Sun," North Korea attempted — and failed — to launch what appeared to be a mid-range missile.

Meanwhile, the U.S., fresh off strikes on Syria and Afghanistan, has been talking tough on North Korea, with the Trump administration warning that the U.S. policy of "strategic patience" with the isolated country is over and that "all options are on the table."

The two countries have long had a strained relationship, and this is far from the first time North Korea has threatened the U.S. with nuclear weapons. What's behind the North's latest nuclear bluster?

In many ways, North Korea is threatening the U.S. and its allies for the same reason it has in the past: It wants to be taken seriously as a mighty world power.

"Recognition, in short, is the key driver behind North Korea's behavior," writes Ramon Pacheco Pardo, a senior lecturer at King's College London and co-director of the London Asia Pacific Centre for Social Science. "Pre-partition Korea always felt like 'a shrimp among whales,' having to make itself heard in a region dominated by great powers. Contemporary North Korea continues with this mentality. It wants Trump and others to recognize it as a fellow whale."

According to Pardo, the isolated country wants to be regarded as "normal" and as a nuclear power.

"The Kim Jong Un regime wants to make clear that the U.S. and other powers have to deal with North Korea as it is, instead of thinking about a possible future under a different government," Pardo writes.

The escalating tensions may also be in line with North Korea's tendency to ramp up nuclear threats during transitions in South Korean leadership. That country recently ousted President Park Geun-hye amid a massive corruption scandal and indicted her on 18 criminal charges including bribery, coercion, abuse of office and illegal leaking of government secrets.

But a new factor has been introduced into the situation: President Donald Trump, whose inexperience and unpredictability have cast the situation on the peninsula in uncertainty.

"The most unpredictable part of this story is Trump, not North Korea. North Korea is doing what it always does," Sue Mi Terry, a former CIA analyst who specializes in North Korea, told the Los Angeles Times. "There is a lot of brinksmanship going on, but people can miscalculate. And things could go very, very wrong."

Analysts worry that a U.S. strike against North Korea would result in a war with the country. If that were to happen, neighboring South Korea and Japan likely would be in danger of retaliation, according to the Times.

While the administration has warned North Korea not to "test" Trump, North Korea has accused the U.S. of escalating tensions in the region — and China has urged both countries to step back from the brink before relations reach an "irreversible and unmanageable stage."