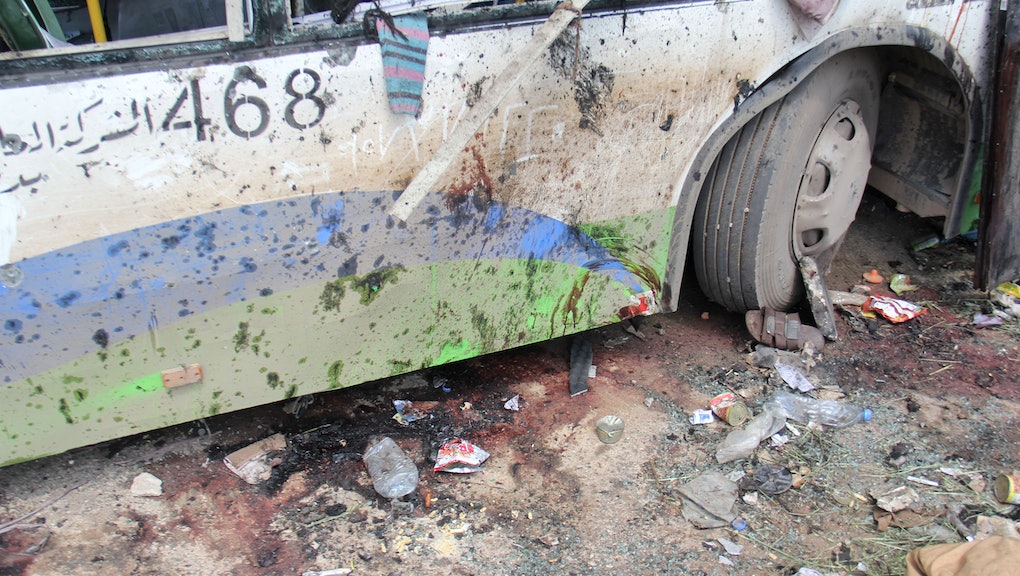 Picture the moment: You are a photographer working in Syria when a bomb rips through a convoy of busses carrying refugees to safety from towns besieged by civil war.

The blast renders you temporarily unconscious, and when you wake up, the scene is carnage. Your decision is immediate, and instead of reaching for your camera, you reach over to take the pulse of a child lying nearby.

The child is dead. You find another child, barely breathing, and you pick him up. You run.

This was the moment captured by Muhammad Alrageb, another photographer who was on the scene last Saturday during the bomb blast that killed at least 126 Syrian evacuees, most of who were fleeing the al-Foua and Kefraya villages in the Idlib province, Reuters reported.

Alrageb's photo, which shows his fellow photographer Abd Alkader Habak rushing a wounded child to safety, will join the ranks of other iconic images that have managed to capture the stark atrocities of the Syrian civil war.

In an interview with CNN, Habak said that he left the young victim with medics, but wasn't sure whether or not the boy survived.

According to Reuters, more than 60 children were killed in Saturday's deadly blast, a grim statistic that reflects the disproportionate amount of trauma that Syrian children have suffered throughout over six years of bloody conflict in the country.

According to CNN, Habak eventually rushed back into the fray, only to find the body of another dead child. A subsequent photo shows the moment he dropped to his knees, overcome with emotion, and wept.

"I was overcome with emotion," he told CNN. "What I and my colleagues witnessed is indescribable."