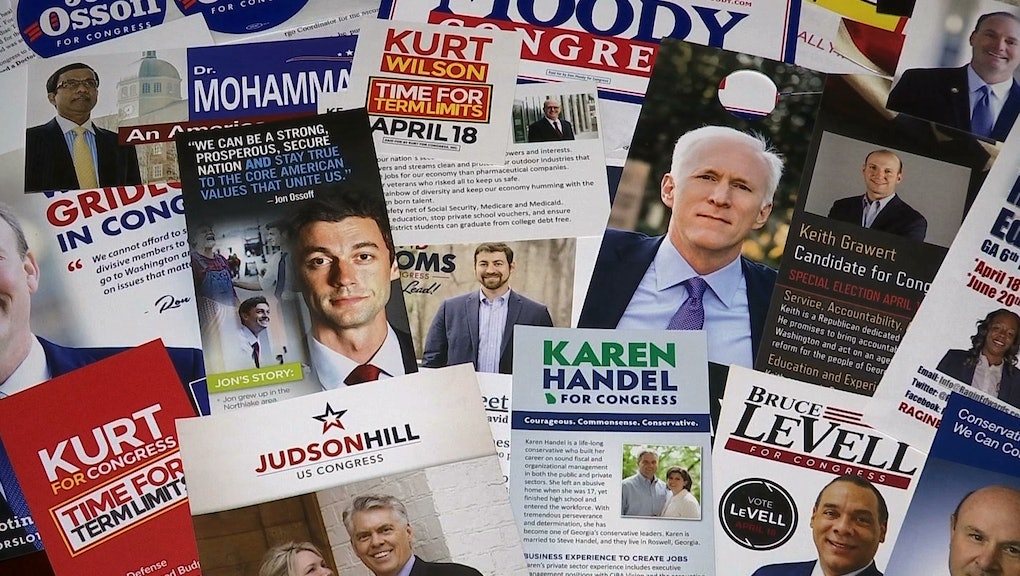 The special election in Georgia's 6th Congressional District is heading to a runoff, after none of the 18 candidates met the 50% threshold needed to win outright in Tuesday's contest. Democrat Jon Ossoff took the first-place spot by a wide margin when the Associated Press declared the race was moving on to a second round. Republican Karen Handel took the second-place spot to advance to the June 20 runoff against Ossoff.

Ossoff could face an uphill battle in the runoff, where a consolidated Republican field stands to upend his improbable run for office. But Democrats are already talking up his strong showing in the election as a hopeful sign for the party.

Follow this live blog for updates. (All times are Eastern.)

Every precinct in the 6th District has now reported its totals.

Ossoff captured 48% of the vote, while Handel garnered 20%, according to the Associated Press.

The race is now headed to a runoff, which analysts expect will be competitive.

Here are Mic's three top takeaways from the contest.

1:37 a.m.: Ossoff won more than twice the votes of his closest competitor

According to the New York Times, which has some 88% of precincts reporting, Ossoff won 48.3% of the vote — a little over 90,000 ballots. Handel, by contrast, has won only 19.7% of the vote so far, amounting to about 37,000 supporters — though she was burdened by a crowded field of 11 Republicans. Handel's next closest GOP challenger war Bob Gray, who hitched his wagon to Trump — perhaps too closely — and currently has 10.7% of he votes.

Donald Trump took credit for what is shaping up to be a forced runoff because Ossoff is poised to fall short of the 50% needed to win outright. Trump personally recorded a robocall and tweeted about the election in an effort to stop Ossoff from clinching the Georgia 6th Congressional District seat.

“Despite major outside money, FAKE media support and eleven Republican candidates,” the president tweeted. “BIG 'R' win with runoff in Georgia. Glad to be of help!”

Ossoff is currently at about 48% in the vote totals — not enough to win outright but a strong showing nonetheless for a Democrat in a district Republicans have held for nearly four decades.

In the robocall, Trump told listeners Ossoff would "raise your taxes, destroy your health care and flood our country with illegal immigrants.”

Wondering why it's taken nearly four-and-a-half hours to count about half of the vote?

Multiple reports from the district say the glacial vote-counting is thanks to a technical problem in the Fulton County election center — the largest county in the district.

As it stands, Ossoff has 50.3% of the vote, with 54% of the Election Day ballots counted. That's just over the threshold needed to avoid a runoff, but it's unclear if that margin will hold with the rest of the votes left to count.

What's more, the half of the vote that's in includes almost all of DeKalb County — the strongest Democratic pocket of the district. That means there are not many strong Democratic areas left to bolster his total.

As heavily Republican areas record their votes, Ossoff could fall past 50%, sending the race to a June 20 runoff.

If that does happen, it looks like Ossoff will face Republican Karen Handel. Handel currently has 18.1% of the vote, while the next closest Republicans hover around 9%.

Handel is the former Georgia secretary of state, and served as a former vice president of public policy at Susan G. Komen for the Cure, a breast cancer charity.

Handel resigned from her post at Komen after she tried to cut the charity's funding to Planned Parenthood — an issue Democrats would likely play up against her in June.

We now have 20% of Election Day precincts reporting, and Ossoff's vote total is shrinking with 56.7% of the vote.

About two-thirds of DeKalb County, the most Democratic of the three counties in the district, is reporting, with Ossoff holding 58% of the vote from that pocket of the seat.

So far, that's less than he needs from the area to break the 50% threshold, according to political analysts.

"At the moment, #GA06 is headed towards a runoff in a hurry ... can Ossoff stop this train now?" tweeted Dave Wasserman, an elections expert at the Cook Political Report.

Buoyed by a cushy lead in (very) early returns, Ossoff supporters were in high spirits as the vote count continued.

Those on scene tweeted that the playlist included old-school hits including Prince's "Kiss," Journey's "Don't Stop Believin'" and "a lot of Michael Jackson," which added up to the tune selection being "significantly older than the candidate." (Ossoff is 30.)

Shortly after 9 p.m., the sound system was favoring the crowd with the "Cha Cha Slide."

All three of the counties that make up the 6th District — DeKalb, Cobb and Fulton — have now reported their early, in-person votes, and things are looking very promising for Ossoff.

Early, in-person voting has Ossoff at 62% in the 18-candidate field — on pace with what he would need to surpass the 50% threshold, according to elections expert Dave Wasserman.

No Election Day vote has been added to the tallies yet, but Republicans in the district say Ossoff is performing better than expected.

Cobb County is reporting its early vote, and it looks good for Democrats.

According to the New York Times' election data expert Nate Cohn, Ossoff got 57% from Cobb County, far higher than the roughly 49% he forecasted Ossoff would get here.

Voters in the 6th District had nearly three weeks to cast an early ballot, and results from that time period are starting to come in.

DeKalb County, the most left-leaning of the three counties that make up the 6th District, has Ossoff with 71% of the vote. The other two counties in the district, Cobb and Fulton, have yet to report their early votes.

Analysts expected Ossoff to have a large lead in the early vote.

But they add that Republicans are likely to have higher turnout on Election Day, rather than the early vote period, given that they had many candidates to choose from and needed more time to make up their minds.

Ultimately, there are a lot more votes out there to be counted.

Polling places in the district were scheduled to close at 7 p.m., with the exception of two in Fulton County that got a little extra time by order of a judge.

Twitter maintained a steady stream of pleas for voters not to give up, reminding them that if they were in line by the 7 p.m. deadline, they still had the right to cast a ballot.

One of those reminders came from Ossoff himself, who reminded voters they "have less than an hour to #FlipThe6th."

Other than those precincts staying open late, voting in the Georgia special election will end in about half an hour, at 7 p.m. Eastern.

Experts say early vote totals are expected to look good for Ossoff. But onlookers should not assume that a lead in the early vote is all good news for the Democratic hopeful. Election Day voting often skews Republican.

According to FiveThirtyEight's Harry Enten, Ossoff would likely have to be "well above 60% among early voters" to have a shot at clearing the 50% threshold needed to win outright.

As results come in, here are some benchmarks to watch to see if an outright Ossoff victory looks plausible, courtesy of FiveThirtyEight's Ryan Matsumoto.

Special election polls are set to close at 7 p.m., but two locations in Fulton County will have extended hours because of problems earlier in the day, the Atlanta Journal-Constitution reported.

The polls at the Centennial location will now remain open an extra 35 minutes, while Johns Creek will get an extra 55 minutes.

Trump sent two tweets about Ossoff earlier in the day, telling Republicans to get out and vote because Ossoff "will raise your taxes" and that Ossoff "would be a disaster in Congress."

Trump has fired off multiple tweets about the election — all of them attacks on Ossoff.

Shortly before 5 p.m. — a few hours before polls are set to close in the district — Trump tweeted that he learned Ossoff is not a resident of the 6th District. Ossoff lives just outside the congressional district boundary in Atlanta.

"Just learned that Jon @Ossoff, who is running for Congress in Georgia, doesn't even live in the district," Trump tweeted. "Republicans, get out and vote!"

Trump sent two tweets about Ossoff earlier in the day, telling Republicans to get out and vote because Ossoff "will raise your taxes" and that Ossoff "would be a disaster in Congress."

Trump's focus on the race is a sign he knows how important it is to his administration's agenda to not lose a district that's been reliably red in past years. If Ossoff wins the seat, it's a sign that Trump's own unpopularity could drag down Republicans in the 2018 midterm elections next November.

The president also recorded a robocall to help get out the vote in the district, in which he tells voters that Ossoff will "raise your taxes, destroy your health care and flood our country with illegal immigrants" if they don't go out and vote.