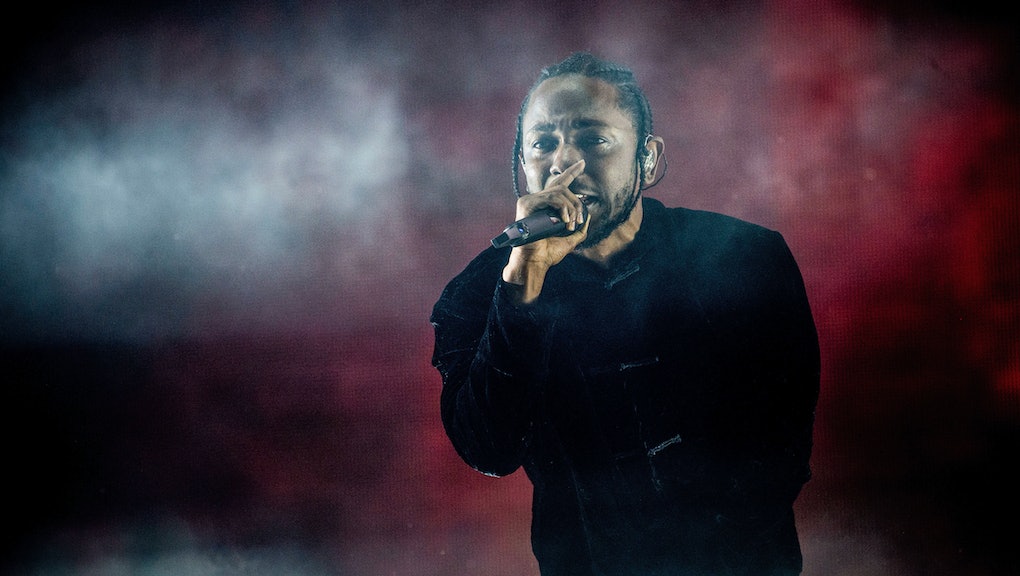 K-Dot. Cornrow Kenny. Kung Fu Kenny. The ever mysterious Kendrick Lamar goes by many names. They've long been interchangeable, like Jay Z and HOVA or Big Boi and Daddy Fat Sax, each one fitting into a different rhyme scheme to refer to the same man. But Tuesday, four days after the release of Kendrick Lamar's highly anticipated fourth studio album, Damn., the Compton MC has decided to bring his latest to life in a new video for the album's blistering "DNA."

"Kendrick Lamar, two first names, huh?" a detective, played by Don Cheadle, asks Lamar in the opening police interrogation scene, common ground for rap videos. "What the fuck is up with that?"

It isn't long before things start heading off the rails. That is not the usual Kendrick we've seen stunting in his cinematic videos. As a Chinese subtitle reveals in the video, it's Kung Fu Kenny, Lamar's newly minted Damn. alias now made flesh. He has powers far beyond any mortal man. He can kill a man with a whisper. However, Lamar is not the first to use the name.

Who is Kung Fu Kenny?

Don Cheadle was actually the first Kung Fu Kenny, playing a martial artist who goes by the name in Jackie Chan and Chris Tucker's, Rush Hour 2.

In the film, Kenny is an ex-con man who now owns a Chinese resturant that serves as a front for an underground gambling den on Crenshaw in Los Angeles. Chan and Tucker come to Kenny for information about a counterfeiting operation, which leads to a quick scrap between Chan and Kenny. In fighting, they realize they're both trained in the same style, with Kenny learning his technique from Master Freddy Ching, the brother of a Beijing master.

By inviting Cheadle to appear in the video, Lamar is clearly bowing to the karate masters of old by flipping the script. Cheadle's Kenny was the one facing interrogation in Rush Hour 2, and now he's grilling Lamar. The original Kenny eventually lets the rapper go after Lamar uses his seemingly superhuman powers of persuasion to help Cheadle realize their shared histories.

But Lamar is also tapping into another lineage in this drama: hip-hop's long fascination with karate film culture. Staten Island's Wu-Tang Clan developed the connection to the fullest extent, building a mythology out of the easily merged symbols of the rap battle and the karate duel, and the shared values of honor, discipline and righteous self-defense both cultures have emphasized.

This idea of brotherhood and honor in the film was similar to what [kids in the burgeoning hip-hop scene] lived with just trying to survive in the projects in New York. They saw something in those films other people might have seen as campy or silly, but they saw it as a very real way of living — a way to live according to a code of honor.

Lamar included the character in his 2017 Coachella headlining set in The Damn Legend of Kung Fu Kenny, a three-part short film following Kenny aka "the Black Turtle" on a mission to "find the Glow," as Billboard summarized it. He also wore the same outfit that appears in the "DNA." video, and was joined onstage at one point by a crew of ninjas.

The "DNA." video doesn't get into that mythic quest. It merely shows us that Kung Fu Kenny Lamar and his "family," as another Chinese subtitle describes, are not the crew to trifle with.