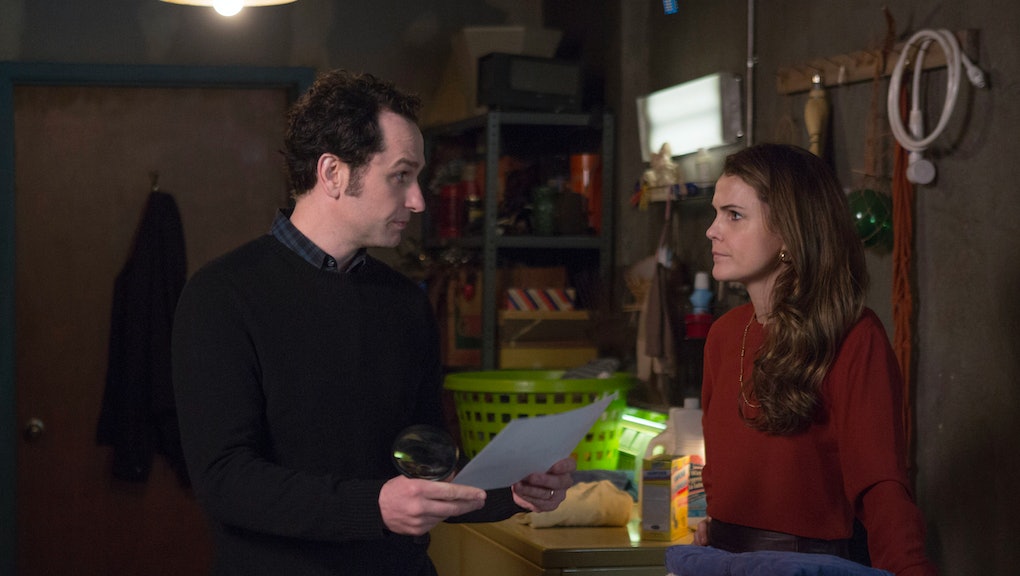 'The Americans' Season 5, Episode 7 Recap: What did Gabriel tell Philip?

Even though The Americans still has a plentiful 16 episodes ahead of it before the series' intended conclusion in 2018, this week's episode, titled "The Committee on Human Rights," did feel like the beginning of the end for TV's beloved KGB family.

From the very first episode, there have been whispers of defection, specifically from Philip Jennings, who has always demonstrated more of a skepticism toward the Soviet cause than his Cold Warrior wife, Elizabeth. But now, with Philip already having learned the truth about his father's lethal past, and still reeling from the aftermath of having killed an innocent man, the loyal Directorate S agent was dealt a double whammy in the episode's concluding minutes.

Gabriel, his longtime adviser and father figure, admitted to blindly committing terrible crimes (including the murder of innocents) in the name of the Soviet Union. He is returning home out of shame, because he doesn't want to continue being a part of this kind of evil machine anymore. And as if that weren't enough of a knife to the heart, his last words to his protégé provided the final twist:

"You were right about Paige. She should be kept out of all this."

He leaves Philip behind in the safe house, likely never to see him again. The Russian spy has now been stunned into silence with an expression that flawlessly combines shock, fear, anger and frustration (an excellent turn by star Matthew Rhys here, who also directed the episode). He doesn't need any dialogue to convey what he's thinking, which is, "You're telling me this now, after you pushed and pushed me to bring her into the fold? All that's done is send me and my daughter into deep depressions, and now you're saying, 'Whoops, sorry! My bad!'"

Gabriel may be going home because his conscience can no longer take the decades of deception and cruelty, but he's now left behind a much bigger mess than any geopolitical conflict. What was initially presented as a tactic to bring the Jennings family together, could now irrevocably rip it apart. As we saw in this episode, Paige is still floundering emotionally, and Philip is well aware that she knows enough about her parents' secret existence that there is no going back for her. If she doesn't join the KGB in some capacity, the knowledge that she holds could end up destroying her from within well before the Soviet Union collapses in seven years. And is Paige too embroiled in this world now for there to even be any hope of extracting her without permanent damage?

The episode opens right where last week's left off, with Philip and Elizabeth introducing Paige to Gabriel. Despite her laundry list of questions, and Gabriel's charismatic compliments that the teen has shown "great courage" in asking for and facing the truth about her parents, Paige leaves the meeting even more confused than before. Gabriel can call Philip and Elizabeth "heroes" and praise their daughter's courage all he wants, but it still doesn't change the fact that to Paige, he's just a stranger who knows an awful lot about her. It's creepy, to say the least.

Adding to Paige's inner turmoil is the bewildering contrast of beliefs she's receiving from her parents/Gabriel and Pastor Tim. Tim, in between booking babysitting dates so he and his wife can see Terms of Endearment, basically gives Paige the same spiel Gabriel did about helping others, only using Jesus instead of Karl Marx as his example. But is Marx starting to edge out Jesus in this battle? Paige sheepishly admits to Tim that she's only praying "sometimes" now ....

The Jennings' methods have also overtaken their daughter in an unexpectedly upsetting way, with Paige's newfound self-defense skills presenting themselves at the most inopportune time. Paige, no longer able to continue having such an intimate relationship while keeping her family's secrets, finally decides to unburden herself by breaking up with Matthew Beeman this episode.

Once again, Holly Taylor hits this scene (and a subsequent one she shares with Rhys) out of the park, as Paige conveys both deep sadness over her decision, as well as sheer exhaustion over having to keep so much of what she's truly feeling bottled up. For what it's worth, I think she made the right choice — not so much because it's hard to maintain a relationship based on lies, but Matthew (through no fault of his own — he's a typical horny teenager, after all) really had no clue what she was all about. Remember that early episode when he demonstrated apathy toward the world's problems? Well, even before Paige found out that her parents were Russian spies, she always had a vested interest in making a difference. And now, when she tells Matthew that he doesn't know her, he confirms her argument by responding with the lamest, most superficial rundown of her interests ("You like to read and you're into church"). I mean, was this guy paying attention at all?

No, he wasn't, but then again, what teenage boy really cares about what's in his girlfriend's heart? Matthew's desire to get into Paige's pants just makes him normal, not necessarily insensitive.

But the scene is still upsetting because obviously she can't tell him what's in her heart, and her breakup excuse of having too many things going on just makes her sound busy, not crumbling on the inside. What makes everything worse is Matthew looks genuinely scared when Paige uses her self-defense training as a reflex against his sweet gesture of affection. And now Paige is suffering an added layer of self-loathing because she knows Matthew didn't do anything to deserve this kind of treatment.

However, I wouldn't be as excited as Philip and Elizabeth are over this new development, because even though Paige isn't crying over this loss, it doesn't mean she feels any sense of relief. As Philip attempts to comfort her in a later scene, expressing his empathy over feeling "different," Paige explains that her pain is something that's been embedded in her from the beginning, and that perhaps she's reached the point of no return, because she's always known there was something off about her and her family: "It's like a million times worse than that, Dad. I felt that way before any of this."

Perhaps Paige shouldn't have been told about her parents' true identities, but since there's no turning back now, the one thing she can't be in anymore is a state of limbo. But the most devastating realization of all is that no matter which direction her parents choose to take with her, it may be too late. Paige has always known she was different, and reconciling her two worlds — the American one and the Russian one — seems an impossibility, at least for the rest of the decade.

Stray observations from "The Committee on Human Rights"

— While I'm still having trouble maintaining interest in Oleg's narrative, we do get confirmation tonight that Stan's threat to the CIA worked: The reason why American intelligence officers didn't show up to their planned meetings with Oleg is because the U.S. has put the kibosh on trying to turn the KGB agent. What I'm more interested in now is the consequence of Stan's actions: His job is in jeopardy. He's only still employed because of the slow-burn mission he and Dennis Aderholt are running, in which they are trying to elicit information from a U.S.-based Russian woman.

— Speaking of Stan, the jury is still out on whether or not his girlfriend, Renee, is actually KGB: Philip asks Gabriel if she is, and to the departing handler's knowledge, she isn't. But even Gabriel admits that the Soviets are so shifty that they might not have told him just to keep Philip in the dark.

— Philip and Elizabeth follow Ben Stobert to Mississippi in order to steal a sample of his "superwheat" which Gabriel then takes with him back to Russia so it can be used to feed the starving Soviets. But the bigger discovery here is they catch the earthy scientist getting cozy with a woman who isn't "Brenda Neal" — and Elizabeth is a lil' jealous.

— Elizabeth breaks into that psychiatrist's office to get the files she needs — and they are for, as the title of the episode suggests, "The Committee on Human Rights." We don't get far with this subplot, other than a couple of lines of dialogue about how the list is of Soviets who are part of an "opposition" to the Communist party. Considering what Philip has learned about his father and Gabriel, he might find human rights violations taking place in the USSR to be of particular interest.

— One thing I did notice at one point in the episode is how Philip and Elizabeth are still subtly indoctrinating Paige toward their beliefs, even if it means withholding the truth: They don't tell her that they discovered the United States isn't deliberately sabotaging grain sent to the Soviet Union. Will Philip put a stop to it now that he knows the detriment it will do to Paige in the long run? He might want to mull it over, especially since Paige thinks the press should be alerted so they can expose this treachery: "It worked with Watergate!"