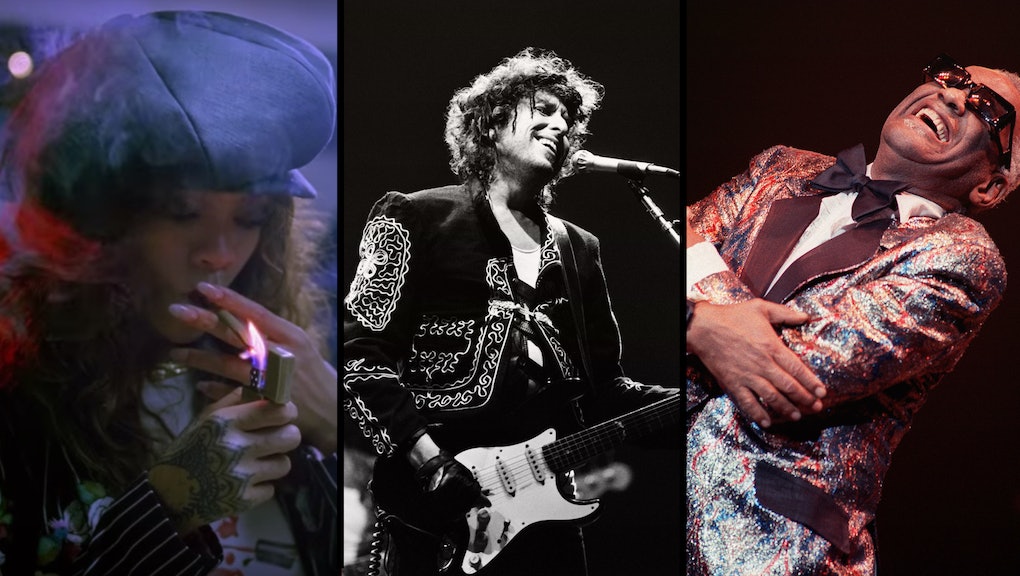 Rihanna, Billie Holiday, Bob Marley and 6 of the most famous stoners in music history

"I'd rather be smoking weed whenever we breathe." When Rihanna sang those words on "James Joint," the second track on her Anti album, it felt like a slight sea change in pop history.

Marijuana smoke has likely long swirled through the recording studios of major label artists, but rarely has it been so specifically name dropped and praised on record by an pop icon of this caliber. It came at a crucial time, no less, when 2016 was just starting to gear up for recreational or medical marijuana legalization votes in nine states, eight of which eventually passed.

When all is said and done, Rihanna may go down as one of the most important stoners in modern music, joining a long lineage of cannabis-loving musicians who found have inspiration in the herb — from Bob Marley and Willie Nelson, back to Billie Holiday and Louis Armstrong — and have returned the favor with advocacy.

Had marijuana never gained the cultural fascination it did in America, music history would likely be unrecognizable. The subtle but profound psychoactive effects of the herb have shaped genres and altered the lyrical content and artistic identities of the musicians that used it. What follows are portraits of a few of those key weed smokers in music history that have championed the plant's therapeutic properties and thereby changed the way Americans view it forever.

Satchmo, America's jazz sweetheart, was a fervent marijuana proponent. He and his fellow vipers — the name for his close-knit fellow jazz smokers — spoke to its virtues at a dangerous time, when Prohibition and Jim Crow were dividing up the land. According to Leafly, he saw the drug first and foremost as "a sort of medicine," he once told his biographer Max Jones, "a cheap drunk and with much better thoughts than one that's full of liquor."

He spoke to it in his music, recording his extremely popular "Muggles" instrumental in 1928, a song named after one of herb's slang names. It offered him emotional and psychological relief at a time when that wasn't easy to come by. "It makes you feel good, man," Armstrong once told record producer John Hammond, according to Pop Matters. "It relaxes you, makes you forget all the bad things that happen to a Negro."

Another proud viper, jazz singer Billie Holiday used to take cab rides between her club sets to smoke marijuana, because smoking in and around the club was too risky. She was infamously hounded by America's "first drug czar," Harry Anslinger of the Federal Bureau of Narcotics. Anslinger was a hater of jazz and black music in which "ancient indecent rites of the East Indies are resurrected," as one of his internal memos read. He testified in front of Congress that "coloreds with big lips lure white women with jazz and marijuana."

Holiday became his public enemy no. 1 in his fight to demonize drugs and their users, taking advantage of Holiday's heroin habit. In 1947, Anslinger managed to arrest her on a narcotics charge and strip her of her cabaret license. She died stripped of fame, one of the first victims of the ongoing drug war. Her autobiography subsequently contains one of the early pleas to humanize addicts that Anslinger and his policies sought to demonize:

Imagine if the government chased sick people with diabetes, put a tax on insulin and drove it into the black market ... then sent them to jail. ... We do practically the same thing every day in the week to sick people hooked on drugs.

The great blind blues legend first discovered marijuana when he started gigging around Seattle at the age of 18. He dealt with it in his music periodically, landing a no. 1 R&B hit in "Let's Go Get Stoned." He described his first experience smoking weed in his autobiography:

It seemed all right to me. I liked the taste, and I liked the mellow effect it had on my body and on my mind. Playing behind grass wasn't bad. I could really feel the groove of the music. And I thought it added to lovemaking. I thought it acted like an aphrodisiac. So like everyone else, I smoked it.

Like Holiday, Charles also found his way into heroin. However, he was crystal clear in his autobiography that marijuana is not a gateway drug, as many prohibitionists characterize it to this day: "It's bull shit that grass leads to heroin," he wrote. "I've always liked those counterarguments which show you that milk leads to heroin since all addicts at one time drank milk."

Beyond his history-making Nobel Prize win, his dedicated Civil Right activism and his revolution in taking folk "electric," one of Bob Dylan's biggest claims to fame will always be the fact that he was the one who introduced the Beatles to marijuana. McCartney fell for it hardest, "telling anyone who would listen that he was 'thinking for the first time, really thinking,'" as the Beatles Bible relates.

That one meeting, where those two artists confirmed their love for the drug, has had a butterfly effect throughout the whole of music history. It changed both artists' music forever, encouraging Dylan and the Beatles to explore the deeper, more esoteric sides of their lyricism and music. "Now these things aren't drugs; they just bend your mind a little," Dylan once said in a 1963 Playboy interview, speaking of opium, hash and pot. "I think everybody's mind should be bent once in a while."

No one's face covers more random drug accessories and paraphernalia than Bob Marley's. For better or worse, he's become the poster child for cannabis advocacy in music to a nearly comical degree. But unlike many run-of-the-mill stoners wearing his face as proof of their worldliness, Marley saw a profound, radical purpose in cannabis smoking. To him, it was a gateway into a truly revolutionary mindset.

"Herb, herb is a plant," Marley once said in a 1979 New Zealand interview discussing the issue of legalization. "I mean, herbs are good for everything. Why, why these people who want to do so much good for everyone, who call themselves governments and this and that, why them say you must not use the herb?

This revolution was what the vast majority of his music sought to spark. Marijuana was a profoundly spiritual means to a liberating end.

Willie Nelson smoked weed at the White House. That story alone is enough to make a stoner hero. Nelson's far-reaching impact on the history of country music and on the nation's current legalization movement solidifies his legendary status even further.

Nelson's love of green was merely one aspect of the offbeat perspective he brought to country music. After briefly quitting music in 1970, due in part to his frustrations with the traditional nature of Nashville country music, he settled in Austin, Texas, and began to experiment, mixing jazz, blues and gospel into his country. The resulting amalgam inadvertently birthed the outlaw country movement and helped establish Austin one of the live music capitals of the world.

Nelson has been a dedicated legalization activist for nearly half a century, extolling marijuana's virtues to all who will listen.

"It's not the only thing we've been lied to about, if you stop and think about it," he told Cannabis Now in February. "I'm still surprised it took this long for educated people to get a little sense."

Willie Nelson once said that Snoop Dogg is his favorite person to smoke weed with: "He and I are ... real good friends," he told Noisey in January. There are myriad reasons for this, most likely, not the least of which being the fact that both have played a similar role helping the American public ease up on their Reefer Madness fears.

"There would be less high-speed chases, less robberies, less crime," Snoop told the Hollywood Reporter in 2012, painting an idyllic portrait of America's future if it embraces legalization. "Go to Amsterdam or the Netherlands, where it is legal, and you see that the crime rate is nonexistent, the murder rate is probably under 10%, people learn to get along! There are people riding on bicycles being happy and it's because of the environment that's provided by the legalization of marijuana."

He's put his money where his mouth is in trying to actualize this future. His marijuana-centric media company, Merry Jane, is an excellent resource for legalization news and the latest scientific research.

Like Nelson before her, country singer Kacey Musgraves' "social libertarianism" has presented a significant challenge to Nashville's genre conventions. Her marijuana advocacy is part of a larger picture of social freedoms she wants the world to pursue. As she sang on her controversial 2013 hit, "Follow Your Arrow":

Her spark has contributed to an explosion of creative energy in country music, carried forward by alternative talents such as Chris Stapleton and Sturgill Simpson, who earned a Grammy nomination for album of the year in 2017. Musgraves sees the feathers she ruffles as a bit of a badge of honor.

"Certain kinds of people will always have an issue with my music," Musgraves told the Guardian in 2013. "But that's fine, it's OK. I don't want to be the McDonald's of music. I don't want to not turn anyone off. If you were everybody's cup of tea, you'd probably be boring."

Rihanna's formal advocacy for marijuana is still in its infancy. Besides including weed mentions in her songs and videos, she's seemingly toyed with the idea of launching her own line of weed products, though fans shouldn't expect that "anytime soon." Her rise as a weed-friendly pop icon could not be more perfectly timed as far as the legalization movement is concerned.

Instagram and Snapchat have given fans an unprecedented amount of access into the star's personal life, and has subsequently helped normalize marijuana smoking for those who rarely venture outside of the pop bubble.

Considering the radical new directions the Beatles, Bob Dylan and other artists' music took after they became more comfortable with the herb, it also doesn't seems much of a stretch to suggest that Rihanna's embrace of weed culture has, in part, encouraged her to push her music into more expansive territory. Anti is far and away one of the most ambitious and unorthodox pop albums to drop in recent years. She's shown no signs of burning out any time soon.