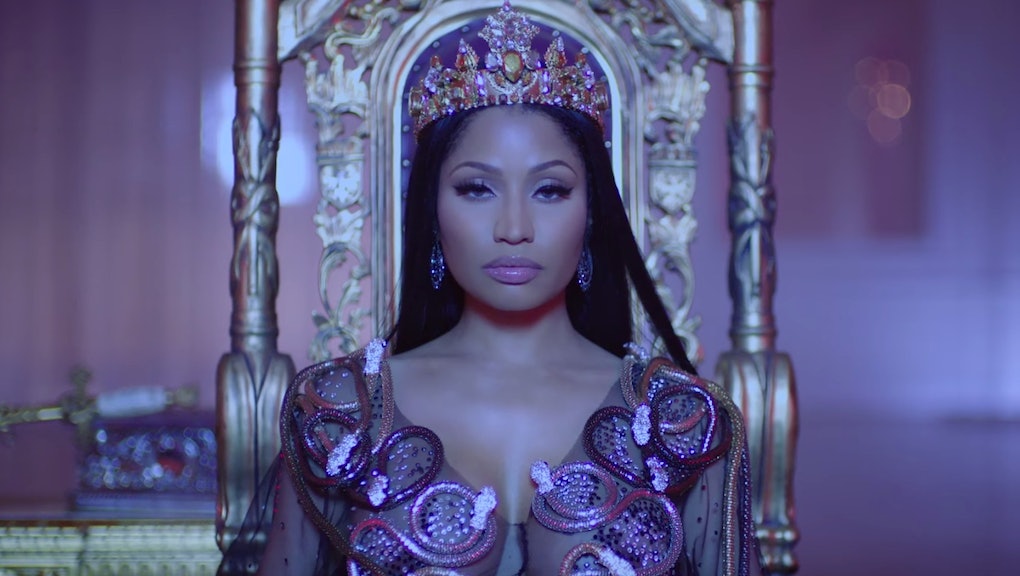 In her latest visual "No Frauds," Nicki Minaj transports us across the pond to London as she serves high-fashion looks with her fellow Young Money Entertainment compatriot Drake and mentor Lil Wayne. You can watch the Benny Boom-directed video, which dropped Wednesday, below.

Minaj released the team-up track "No Frauds" in March as part of a three-song bundle called "#3PackFromParis." Throughout the video, she raps in front of a background landscape of Big Ben and the London Bridge before Drake joins her at a club. The rap queen also sits on a throne, rocking a crown while Lil Wayne sits beside her.

"No Frauds" features a diss verse against rapper Remy Ma's "ShETHER" record, which called out Minaj's place as hip-hop's queen. In the lines below, Minaj defends her reign as a top seller.

You can't be Pablo if your work ain't sellin'

Minaj's new music was already highly anticipated by her fans, but the response verse resulted in additional buzz around this particular track. The song is currently No. 14 on the Billboard Hot 100.

The rapper has been putting in the work to roll out multiple music videos, including "Make Love," a collaboration with Gucci Mane, and her feature in Major Lazer's "Run Up" with PartyNextDoor. On Tuesday, Minaj teased a mini-movie for her song "Regret in Your Tears" on Instagram. Her post indicated she may be premiering the visual in New York, Los Angeles or Miami in the coming days.

Minaj has other music videos on the way, too, including a visual for DNCE's "Kissing Strangers" and an unreleased track with rapper Future.