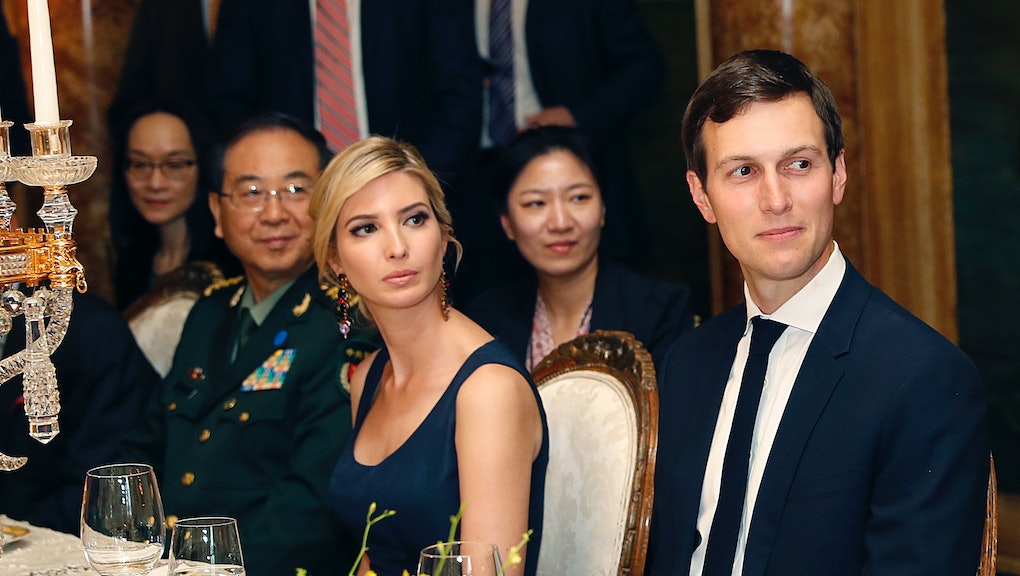 Ivanka Trump and China: A history of Trump daughter's ties to China

First daughter Ivanka Trump made headlines in April, as the AP reported her business' trademark applications in China had been approved by the Chinese government the same day she dined with Chinese President Xi Jinping at Mar-a-Lago.

But this April 6 meeting wasn't the start of Ivanka's Chinese ties. In contrast to her father's often harsh rhetoric towards the Eastern nation, Trump has a history of ingratiating herself with China — and heavily relying on their manufacturing for her business empire.

"Her father is a regular critic of China, so Ivanka's moves sort of compensate for that," Shi Yinhong, an international relations professor at Renmin University in Beijing, told the New York Times. "The Chinese government will see there are both ugly and positive messages coming out of the U.S."

The Chinese people have openly embraced Ivanka for her glamor and "working woman" brand, the New York Times reported, with users on Chinese social media site Weibo even referring to Trump as a "goddess."

"She's very independent," Wang Jiabao, a reality television producer in Beijing, told the Times. "She represents what we're looking for — to marry into a decent family, to look good, and to also have your own career."

Trump, CNN reported, is known as "baifumei" in China — a term meaning "white, rich and beautiful" — and the Washington Post has noted there is even a Chinese plastic surgery firm that provides a service to look more like the first daughter. The official Chinese news agency, Xinhua, also compared Trump to famous Chinese actress Li Bingbing in a recent tweet.

For her part, Trump has been courting herself with the Chinese people through social media, where she's posted photos and videos of her and her children embracing Chinese culture.

A video of five-year-old daughter Arabella — who, the Guardian noted, began learning Mandarin at 18 months old — singing in the Chinese language went viral, earning over one million views and numerous comments from Chinese fans. Trump also posted another Instagram photo of son Theodore playing with blocks that have Chinese characters on them.

Trump also has significant business interests in China, where she manufactures most of the products for her Ivanka Trump brand. Agence France-Press reported that at least 82 shipments of Ivanka-branded products were shipped from China to the U.S. between the Nov. 8 election and Feb. 26 alone.

The first daughter's Chinese business colleagues seem to be among those who hold a positive view of Trump. Huajian Group chairman Zhang Huarong, whose Chinese factories manufacture Trump's shoes, along with other western brands, told CNN Money that "Ivanka is a very good client."

Trump's Chinese manufacturing, of course, runs counter to her father's recent "Buy American and Hire American" order — which the president himself has routinely broken as well. Ivanka's brand would also take an economic hit if her father's proposed "border tax" were to go through.

When it comes to Ivanka's entrance into the Chinese market, however, she hasn't fared quite so well. An Ivanka-branded jewelry store in Beijing opened in 2013, only to shutter two years later, Buzzfeed reported.

But the Chinese have been quick to capitalize on Ivanka's popularity. The Washington Post reported that 258 trademark applications using variations of Ivanka's name — none of which were directly associated with Trump herself — were filed in China between Nov. 10 and the end of 2016 alone.

The numerous trademark filings give credence to Trump's claim that the trademark applications approved during Xi's Mar-a-Lago visit were "defensive" filings to prevent others from using her name.

Now that China-friendly Ivanka is in Washington, CNN reported, the Beijing government is working to better its relationship with President Trump through his daughter and son-in-law Jared Kushner.

"Beijing is keenly aware that Trump relies closely on a very small group of advisers to guide him on policy issues, including his son-in-law Jared Kushner and daughter Ivanka Trump," Zhang Baohui, a professor of political science at Lingnan University in Hong Kong, wrote in an op-ed for CNN.

Since her father took office, Ivanka has helped serve as a diplomatic ally to the Chinese government, often relying on Arabella and her Mandarin language skills. Arabella and brother Joseph performed songs and poetry in Mandarin for Xi and first lady Peng Liyuan during their Mar-a-Lago visit, and the mother and daughter visited the Chinese embassy in honor of Chinese New Year — a holiday, the Guardian notes, that her father did not acknowledge.

"Her appearance at the Chinese embassy, with a certain political and diplomatic significance, could be invigorating to the China-U.S. relationship," an editorial in the Global Times, a Chinese state-run tabloid, noted, as quoted by the Guardian.

Of course, Trump's diplomatic efforts with the Chinese and business interests now put her at risk for ethical violations — as evidenced by the coincidental timing of her trademark application approvals.

Though President Trump is exempted from conflict of interest laws, the New York Times noted, his daughter and son-in-law — now that they've taken on official White House roles — are legally prohibited from using their government position to benefit themselves financially.