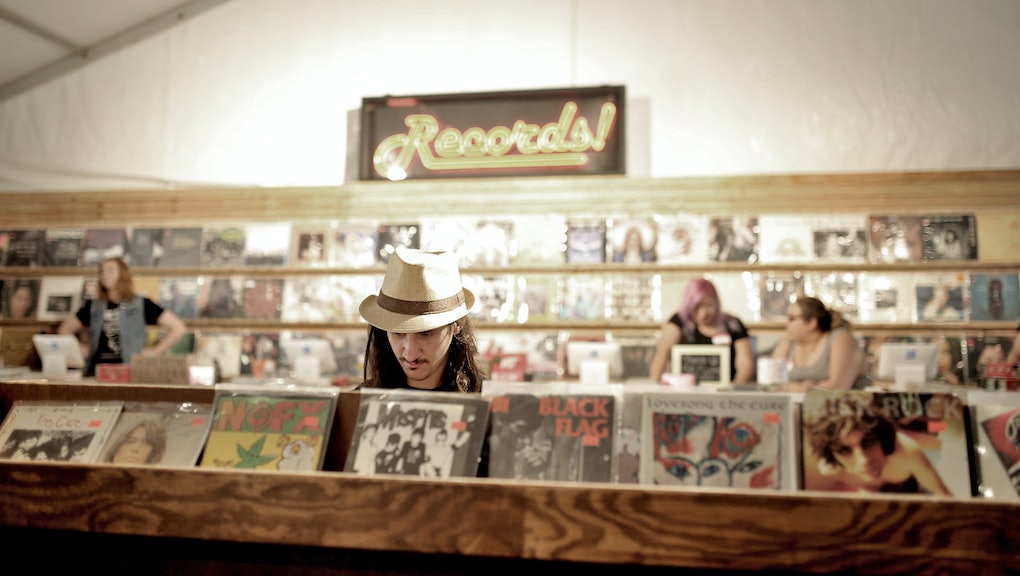 Record Store Day: 3 indie record shops share the albums you must own on vinyl

Saturday is a holiday for independent record stores and music collectors across the country. Since 2008, Record Store Day has been a celebration of the record-store culture and the pastime of perusing for music when finding a new tune is as easy as clicking a button — but not every song is available online.

Each year on Record Store Day, many rarities are reissued on vinyl and music collectors flock to shops to get their hands on the limited supply. On Saturday, some may be looking for these re-pressed songs or just hoping to score any essential record to add to their collection. To help, we've asked three record-store owners and managers what to look for. Here are their expert tips to get you ready for Record Store Day 2017.

A London staple since 1976, Rough Trade opened its largest outlet in Brooklyn's Williamsburg neighborhood in 2013. As a metal enthusiast, Adrian Pinto, co-manager of operations at Rough Trade NYC, is personally looking forward to a limited-edition picture disc of Venom's 1984 album At War with Satan. Pinto ran down a thorough list of what collectors should look out for Saturday.

The Beatles: "There's a Beatles 7-inch with "Strawberry Fields Forever," which will probably go really fast."

Steve Earle and the Dukes: "He's got a live cover of Waylon Jennings songs that's coming out, and he'll be playing here as well on Record Store Day."

Sun Ra: "Some seasonal favorites for us is Sun Ra, and there are two releases coming out: Discipline 27-II and Janus."

Neil Young's Decade: "That hasn't been around for very long time, probably since it was first pressed."

Sharon Jones: "There's also the Sharon Jones 7-inch, which is really the early recordings of her [work] before she was with the Dap-Kings. That's definitely a highlight for us."

Jason Isabelle: "There's a lot of live albums as well. Jason Isbell's live record coming out, that one's going to do really well."

Luis Granda is a major jazz fan and manager at Miami's Museo Del Disco, where he's sold new and reissued records for 12 years. Granda dished on the special items likely to fly off shelves on Saturday.

The Ramones' 76-'79 Singles box set: "The Ramones is going to be really popular. Even though it's kind of pricey, I still think a lot of people are going to want that."

Pink Floyd's The Early Years box set: "We ordered 20 and we only got, like, three [now]. My guess is everyone's going to be after that," Granda said. This year, the group's Interstellar Overdrive and A London 1966-1967 are also being reissued in 2017.

Bill Evans' Another Time: The Hilversum Concert: "Bill Evans is a really hot item because it's something that has not even been released on CD."

Granda also talked the records you should consider even after Record Store Day.

Kind of Blue by Miles Davis: "If you're into jazz."

The Wall by Pink Floyd; any Led Zeppelin: "If you're into rock."

Any early West Montgomery on vinyl: "It's really hard to find."

The Spiders: "If you can find a Spiders LP, it's probably worth about $100 to $300. The more popular soul albums like Marvin Gaye and Teddy Pendergrass, they pressed a lot of them so they're not that expensive."

In 2012, Sebastian Mathews opened Touch Vinyl in Los Angeles to build a community around vinyl lovers. These days, Mathews is curious about collecting records by the French band Air and exploring David Bowie's theories on God and existence in his music. Mathews also gave Mic his picks for essentials on Record Store Day and beyond.

The Doors: "I would say The Doors Live, and in that case I think it's like a newly mastered [vinyl]. And just the Doors anything is great. I think in an LA shop, it's always nice to have some Jim Morrison around."

Blade Runner original soundtrack: "That's an album that's notoriously hard to get either as a reissue or as an original, and now it's got the artwork from the original album on the picture disc, so that's cool."

Oscar Peterson: "In the jazz space, I'd say Oscar Peterson is one of my favorites. He's a jazz pianist who is just so mellow about the way he plays, and there's a lot of great albums from him, but there's one in particular: We Get Requests."

Girls in the Garage: "There's stuff a little bit more off the beaten path, like world music compilations, that my costumers always dig ... There's one called Girls in the Garage, and it's an all-Asian girl band from the 1960s, and that's kind of cool for people that collect world music."

Donald Byrd: "He's got an album called A New Perspective which is really cool."

Charles Mignus: "My employee, David, actually mentioned an album by Charles Mingus called Mingus Ah Um, and we had that in the store before and it's one that's always popular."