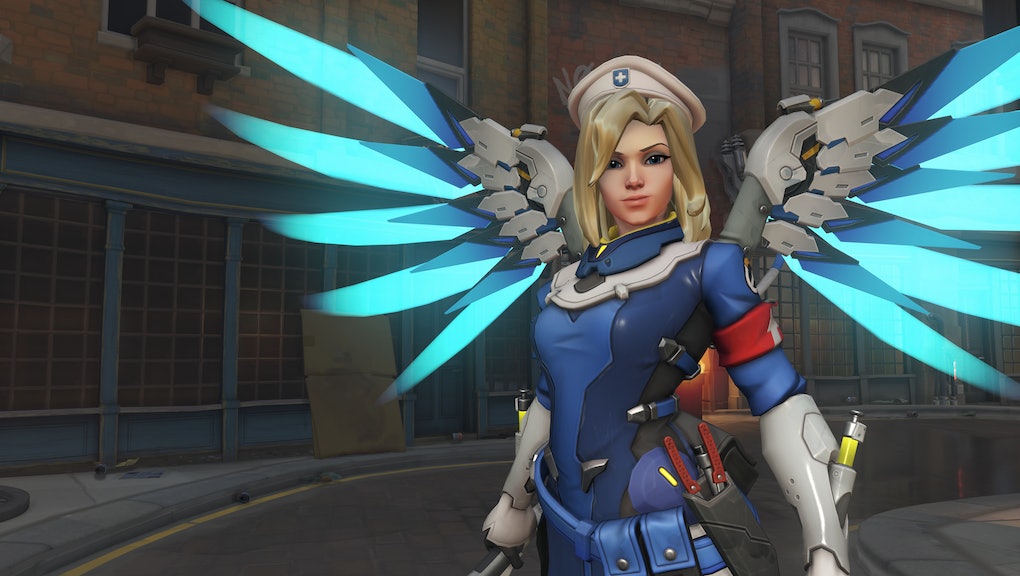 Overwatch fans who play healer characters — like Mercy and Zenyatta — have been reporting that the skill rating points they earn in competitive matches are much lower than their teammates playing offensive characters. In a lengthy forum post, Blizzard finally responded to these reports — and its answer is basically just ¯\_(?)_/¯.

OK, it's obviously a little more nuanced than that, and it actually unveiled some interesting details about how the skill rating system works under the hood. Here's what's going on.

It seems these reports about lower SR gains started when Blizzard made a tweak to the way Overwatch's "on fire" system — the blue bar that measures how well you're performing — works. Essentially, players were receiving too much credit toward their "on fire" meter for assists, causing healer's bars to max out way more than they should have. Blizzard said it considered this a bug and has since remedied the problem.

Then, when support heroes noticed they weren't "on fire" as much, it seems some players also assumed they were receiving less SR during competitive matches as a result. Then, as fandoms are wont to do, these reports of low SR gains took off once the issue became more visible, according to Kotaku.

However, Blizzard made clear that those two systems — the "on fire" meter and skill ratings — are not always aligned with one another.

"The change to the handling of assists also affected how often a player might earn 'on fire' status during a match, but the amount a player is 'on fire' does not directly affect SR adjustments due to player performance," Overwatch principal designer Scott Mercer said on Blizzard's forums. "There is some correlation between the two because both systems are trying to measure, 'How well are you playing?' but there are significant differences."

Instead of measuring your performance within a single match, Mercer said your SR gains are determined by comparing your performance to how well other players perform on that same character across many, many matches — Anas compared to all other Anas, etc. Therefore, Blizzard said it hasn't found a "broad systemic issue" with SR gains as some players have alleged, but it's still taking the anecdotal reports seriously.

"There might be a more localized issue affecting a specific hero, or a certain type of play style or game situation," Mercer said. "It also might be something completely unexpected, so we're doing a thorough examination of all the code that affects SR adjustment."

Despite the length of Mercer's forum post, there are still lots of unanswered questions. For example, it's not clear exactly how Blizzard measures a healer's skill. If it's simply a measure of how much healing they do, does this mean that a skilled team who doesn't require as much healing will inadvertently squander a healer's skill rating gains? These kinds of questions still don't have clear answers.

From the way the thread of comments on Mercer's post looks, anecdotal reports of low SR gains for healers won't slow down any time soon. One of the first comments is a story from a player who says they've received significantly more SR per match since switching from Zenyatta to D.Va.

"I was always averaging 18 to 20 SR per win regardless of being on fire or performing well," KingSlayer wrote. "Same was true if I performed very badly. Still got 18 to 20 SR regardless of skill ... I stopped playing Zen for a while and started playing D.Va. Suddenly I am getting at least 30 SR for wins even if I did average."

Playing a healer has a reputation for being a thankless role as it is, so hopefully, Overwatch itself isn't making things even harder on them. We'll update you if any more information becomes available.

For more on Overwatch, check out the rest of what Mic has to offer. Here is our Project Runway-style judging of every new Uprising skin, an unintentionally hilarious infographicshowing the most popular Overwatch characters in each state, our definitive ranking of every Overwatch hero and a giant Overwatch FAQ for beginners.