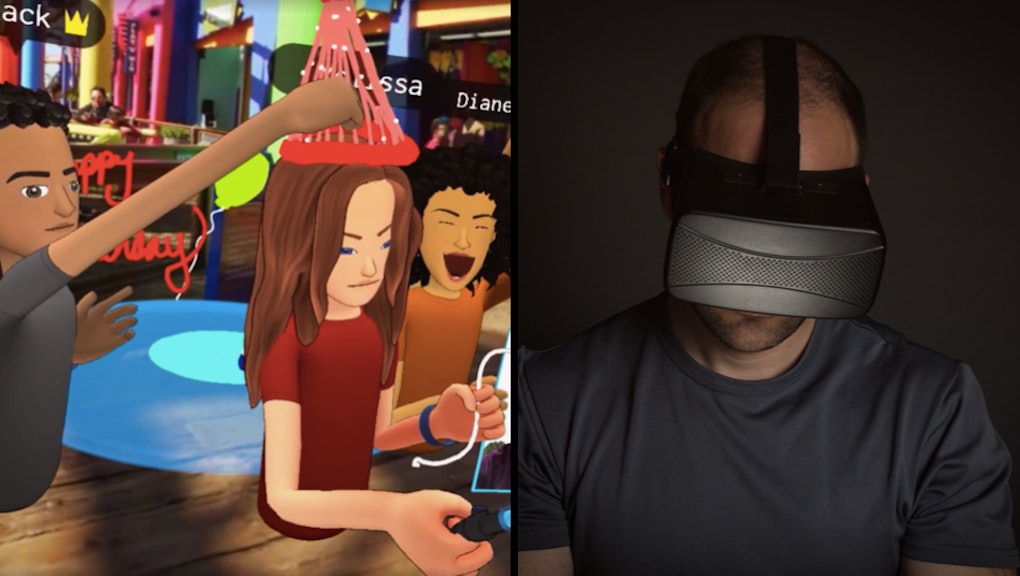 I don't want to live in Mark Zuckerberg's future

When the alarm buzzes, you wake up alone. You check your notifications in bed. No need to check the weather — you won't be going outside.

You pour a cup of coffee at your kitchen table and open your laptop. Your cup looks lonely sitting by itself, so you take out your phone, open Facebook's augmented reality camera and point it at your cup.

With a few taps, there's a virtual second coffee next to your own. Now you don't seem so alone when you share the image on Instagram.

Welcome to the future, as designed by Facebook CEO Mark Zuckerberg: high-tech augmented-reality visuals; a convenient, digitally optimized life; and no real need to see a real, live human being.

On Tuesday, Facebook CEO Mark Zuckerberg gave a keynote address at the company's annual F8 conference for developers, in which he outlined his vision for Facbeook's future. Most of that vision centered around augmented reality. We've already seen augmented reality successes on mobile services — namely Pokémon Go and Snapchat — and Zuckerberg wants to get in on it.

Zuckerberg showed a piece of augmented reality artwork, which you can see only by looking at a certain wall through your phone's camera. "Now, around Facebook, we notice that there's just people gathering around looking at blank walls," Zuckerberg said. "This is going to be a thing in the future — people just kind of sitting around and staring at blank walls." He showed a photo of a group of people holding their phones up to a blank wall.

Facebook is also getting into virtual reality with something it's calling Facebook Spaces. Facebook owns the virtual reality company Oculus Rift, so this isn't a surprise. Facebook Spaces is a way to talk to your Facebook friends in virtual reality, using animated avatars. "In order to have a meaningful social experience in VR, you need a lifelike avatar that's representing you, with expressions that help you relate your feelings to other people," Rachel Franklin, Facebook's head of social VR, said at F8.

So imagine that when your friend calls, you'll both appear as 3-D cartoons. You'll chat in a virtual room. When your own apartment starts to look boring, you can fill it with virtual bouncy balls. You could even go on virtual boat rides with friends from the next town over.

It's a digital utopia, a paradise of effortless activity. There's no pressure to project a perfect life, because it's fake. Zuckerberg is designing an entire world that can exist solely on Facebook. Why ever leave?

Maybe to preserve our mental health. What sounds so frightening about Zuck's VR vision is how depressingly lonely it feels. If this is the future, I don't want to live in it.

The problem with virtual friendship

Here are just a few examples: One study out of Harvard and University of Chicago's Business Schools showed that human touch has a huge effect on the way we interact. If pairs of negotiators shook hands at the start of a meeting, they were more likely to be honest and cooperative in their negotiations than those who did not touch.

Face-to-face communication literally does something different in your brain than online communication does. Your brain even reacts differently if you sit facing someone or back-to-back; according to a study published in the Journal of Neuroscience — something called neural synchronization happens when you're speaking face-to-face. Another study showed that when two people are speaking to each other and their brains "sync up," they're more likely to communicate successfully.

Moreover, when we speak to others in person, we rely heavily on nonverbal cues to understand them. No avatar, no matter how lifelike, can provide the same physical and facial cues as a human being.

While the purpose of social media is to connect to people, it has actually been found to make us feel more isolated and lonely.

For some, virtual communication can make them feel more disconnected. And when I look at Facebook's vision of the future, the findings above ring true: All I see is cartoon people taking fake selfies of their fake avatars. It's a simulated version of performative friendship.

Is this the future of connection?

People need human connection. I've found this to be the case in my personal life. On days when I've stayed home (sick or otherwise) and not spoken with people in real life, I feel depressed and anxious. Instagram messages just don't do the trick. It's important for me to look into someone's eyes. But I'm a self-identifying extrovert; it's not the same for everyone.

For many with social anxiety, folks who live in isolated areas or are in long-distance relationships, online communication has opened up new doors. It's easier than ever to find and connect to people with similar interests or issues from across the world without having to spend much money or leave their homes. There's a program in Australia, for example, that gives virtual reality headsets to hospital patients, allowing them to have immersive experiences without ever leaving their beds.

When the choice is between online communication and no communication, the choice is simple. We just have to make sure we're not isolating ourselves without realizing it. When the goggles come off, we're still alone in a bedroom with blank walls.