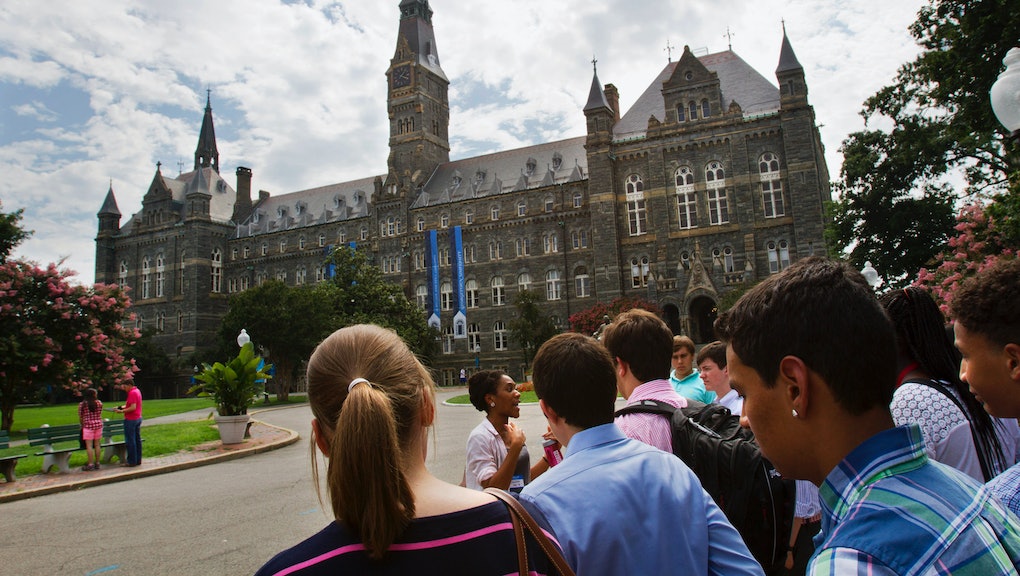 Georgetown renames buildings after slaves, asks for forgiveness for its role in slavery

Georgetown University formally apologized and asked for forgiveness for its role in slavery. In 1838, the university sold 272 slaves as a means to pay off its debts.

On Tuesday, the Jesuit order of the university held a solemn ceremony of remembrance with over 100 descendants of slaves at Gaston Hall. Rev. Tim Kesicki, the president of the Jesuit Conference of Canada and United States, delivered the formal apology during the Liturgy of Remembrance, Contrition and Hope.

"We are profoundly sorry,"  Rev. Kesicki said. "It is our very enslavement of another, our very ownership of another, culminating in the tragic sale of 272 women, men and children, that remains with us to this day, trapping us in an historic truth, for which we implore mercy and justice, hope and healing."

The university found itself in hot water in 2016 after students and faculty pressured the institution to rename two campus buildings that were named after former slave owners Thomas Mulledy Jr. and William McSherry. Mulledy Jr. and McSherry were both former university presidents in Jesuit plantations in Maryland and Louisiana. The Working Group on Slavery, Memory and Reconciliation produced a 104-page report detailing the university's involvement in the American slave trade.

In September 2016, in response to the report, university president John J. DeGioia issued a statement apologizing for the academic institution's involvement in slavery and offered to provide admission. After working with the group on recommendations, the university announced in Tuesday's liturgy that it has officially renamed the Mulledy Hall and McSherry Hall to Isaac Hawkins Hall and Anne Marie Becraft Hall.

Hawkins and his family were sold to a plantation when he was 65 years old. Becraft created a school for black girls in 1820 at Georgetown. After joining the Oblate Sisters of Providence, the country's first African-American Catholic Sisterhood, she became one of the first black nuns in the U.S. She took on the name Sister Mary Aloysius.

DeGioia released a statement on Tuesday acknowledging the ceremony and committing the university to work toward justice.

"We do not seek to move on with this apology, but to move forward with open hearts to respond to the urgent demands of justice, still present in our time," DeGioia wrote. "The expression of contrition that we offer today guides, permeates, animates our ongoing work for justice. We build a more just world with honest reflection on our past and commitment to a faith that does justice."