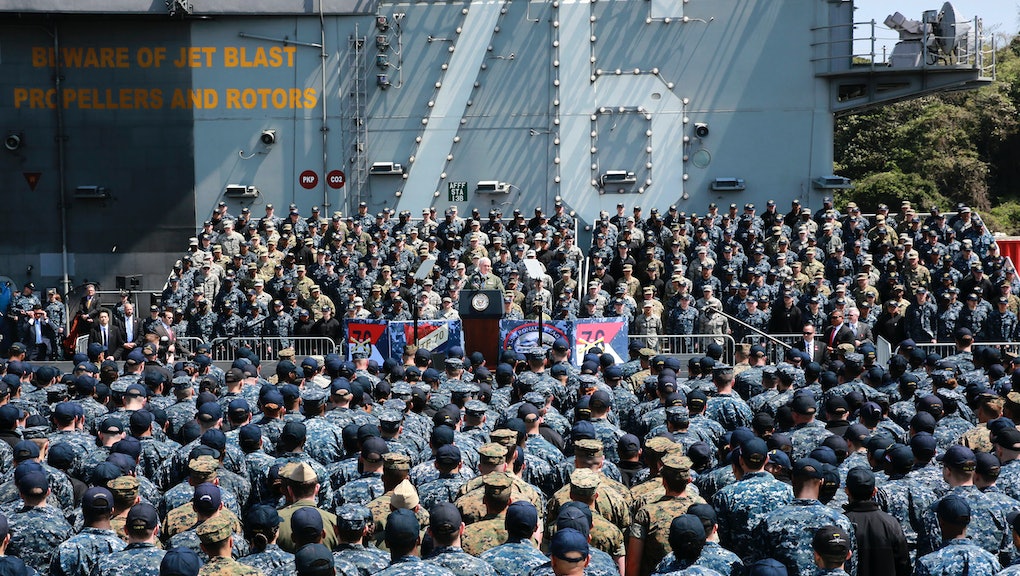 North Korea Threat: How is the US responding to Pyongyang's recent missile threats?

As the U.S. response to the threat of North Korea takes shape under President Donald Trump, Vice President Mike Pence has already been deployed to the region.

"We will defeat any attack and meet any use of conventional or nuclear weapons with an overwhelming and effective American response," the vice president said on Wednesday.

"The United States of America will always seek peace, but under President Trump, the shield stands guard and the sword stands ready," he continued.

We still don't yet know the exact details of North Korea's nuclear weapons capability, but the Trump administration is showing itself unwilling to engage in "strategic patience" any longer.

North Korea's aggressions have begun to rattle China, especially since the country threatened a nuclear strike against the United States.

"If the U.S. is planning a military attack against us, we will react with a nuclear pre-emptive strike by our own style and method," a North Korean official told the BBC on Monday.

Despite North Korea's posturing, the Pentagon says the country's recent missile test failed and resulted in an explosion shortly after launch.

Military force against North Korea has always been a difficult proposition. Bloomberg spoke to Gary Samore, a former White House coordinator for weapons of mass destruction, proliferation and terrorism, about the situation.

Samore reiterated the unlikely nature of military action at this juncture, disputing the practicality of a strike.

"Unless you were in a crisis situation where we thought the North Koreans were getting ready to attack us, a preemptive strike against the North Korean nuclear and missile program is simply not a practical option."

Bloomberg reports that air strikes against a North Korean nuclear reactor facility have been discussed since the Clinton administration, but have yet to be executed.

While the Trump administration talks tough on North Korea, viewers were alarmed when Trump didn't appear to even know who the leader of North Korea was during a "Fox & Friends" interview on Tuesday.

He seemed to be under the impression that current leader Kim Jong Un's father, the deceased Kim Jong Il, was still in power.