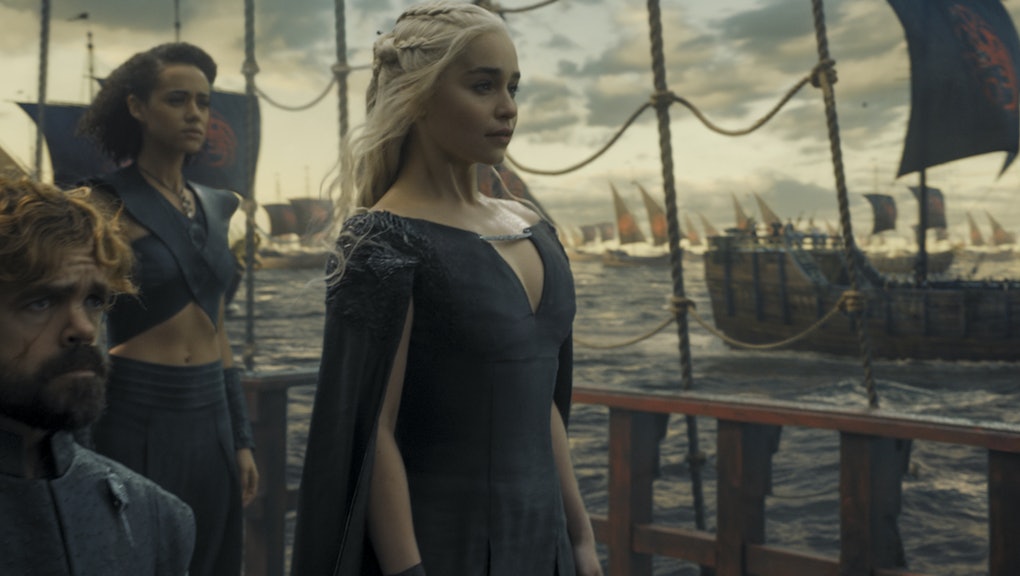 'Game of Thrones' Season 7 Theories: 6 predictions for the new season

Game of Thrones season seven may be premiering in July, but avid watchers know that we're about to enter a much colder Westeros. If repeatedly hearing "winter is coming" on the show wasn't enough to prepare us for that, the producers announced the new season with an actual block of ice. Soon after, a teaser trailer was released, leaving much to the imagination.

For those who haven't had time to watch said video, it essentially features the three main contenders for the throne — Cersei Lannister, Jon Snow and Daenerys Targaryen — each slowly making their way toward the Iron Throne. Cersei's the last to sit, but before she can get too comfortable, she exhales an icy breath and the shot pans out to show we're actually in the eye of a White Walker. So, what can we expect from the illusive season seven? Here are six predictions before the premiere.

This was heavily alluded to toward the end of season six. Jaqen says Arya has finally become "no one," to which she replies, "A girl is Arya Stark of Winterfell, and I'm going home."

She's also already quite close — having just killed Walder Frey at The Twins in the Riverlands  in central Westeros. Once she returns to Winterfell, she'll find her family back in power (as well as a whole lot of blood) and ruling the North.

2. More claims to the Iron Throne

Right now, based on the trailer, the active rulers who seem to be vying for the Iron Throne are Cersei Lannister, Jon Snow and Daenerys Targaryen. There are, however, still a few underdog characters who could snag the seat from under them.

Several months ago, while the show was still filming, a photo of Joe Dempsie — who plays Gendry, the most noteworthy of Robert Baratheon's bastard sons — began to circulate. Gendry would certainly have a tenable claim to the Throne, wouldn't he? The last we saw of him was when Sir Davos saved him from Dragonstone at the end of season three. It's about time for him to resurface and throw a wrench into the game.

Tyrion Lannister is another potential Iron Throne usurper worth considering (after all, some theorize that he may actually be a Targaryen himself). He's heading back to King's Landing with Daenerys — if something should happen to her, he could totally step in and rule. It would certainly be unexpected, which everyone knows is Game of Thrones' specialty.

3. A marriage between two half-siblings

OK, so this might be weird and borderline gross, but hell, what isn't on this show? After so many years of being kept down by various men and women in power, Sansa is finally climbing the ladder of power herself with her loyal half-brother by her side.

Granted, she doesn't need to marry Jon to stay strong and maintain control, as the end of last season clearly demonstrated — but it would make for a nice, legal alignment should she want to become queen of Westeros someday.

The last we saw of Melisandre in season six was when Jon Snow exiled her from Winterfell and ordered her to ride south. Odds are she'll ride toward King's Landing. But guess who'll be making her way towards Winterfell as Melisandre heads away from it? Miss Arya Stark, that's who — and right off her most recent kill no less. Melisandre's on Arya's hit list for kidnapping Gendry back in season three. Looks like she may have a chance to cross another person off her list quite soon.

This has been a fan theory for some time, and now that Cersei's on the Iron Throne, it seems like her death is imminent — no one seems to remain on the Throne for long. In true, poetic Game of Thrones fashion, the only person who should take her out is her brother/ lover. Hey, if you love someone, run them through with your sword. (That's how the phrase goes, right?)

6. The Wall will come down

This could happen anywhere in season seven, considering how many White Walkers are marching south — but wouldn't it be such a cool way to end the season? There's a theory that Bran will accidentally negate the invisible force keeping the White Walkers safely beyond The Wall, because he was marked by their leader. Silly Bran — always inadvertently messing things up in ways that result in catastrophes for the people he loves.