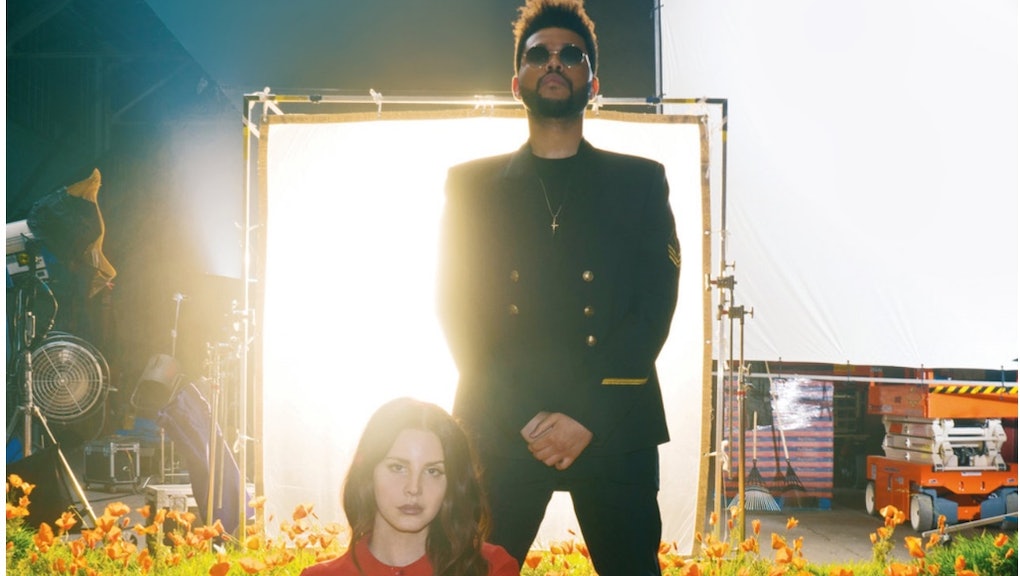 Lana Del Rey and The Weeknd's steamy "Lust for Life": Stream it here

Without warning, Lana Del Rey released her forthcoming album's title track "Lust for Life" featuring The Weeknd on Wednesday afternoon. The singers give breathy and steamy vocals against the stripped backbeat. Together they chant their equal desires to strip down and free themselves to the lustful moment in front of them. "Take off all of your clothes/ They say only the good die young/ That just ain't right/ 'Cause we're having too much fun," they both chant in the pre-chorus, according to Genius. Listen to the new track below:

The visual provided for the audio seems to pick up where Del Rey left off in her Lust for Life album trailer. Del Rey and The Weeknd sit closely on top of the Hollywood Hills sign — a strong symbol present in the previously mentioned promo visuals. Both the scenery and The Weeknd are in black-and-white, but Del Rey pops out because of her red dress.

Del Rey spoke on collaborating with The Weeknd in an interview with Courtney Love for the latest spring/summer issue of Dazed Magazine.

"Maybe that's kind of weird to have a feature on the title track, but I really love that song and we had said for a while that we were gonna do something; I did stuff on his last two records," she said.

Del Rey was featured on The Weeknd's "Stargirl Interlude" from Starboy, as well as "Prisoner" on Beauty Behind the Madness — so it seems the Weeknd has returned the favor in a major way.

Last week, Del Ray showcased her next album's cover, but no official release date has been announced yet.