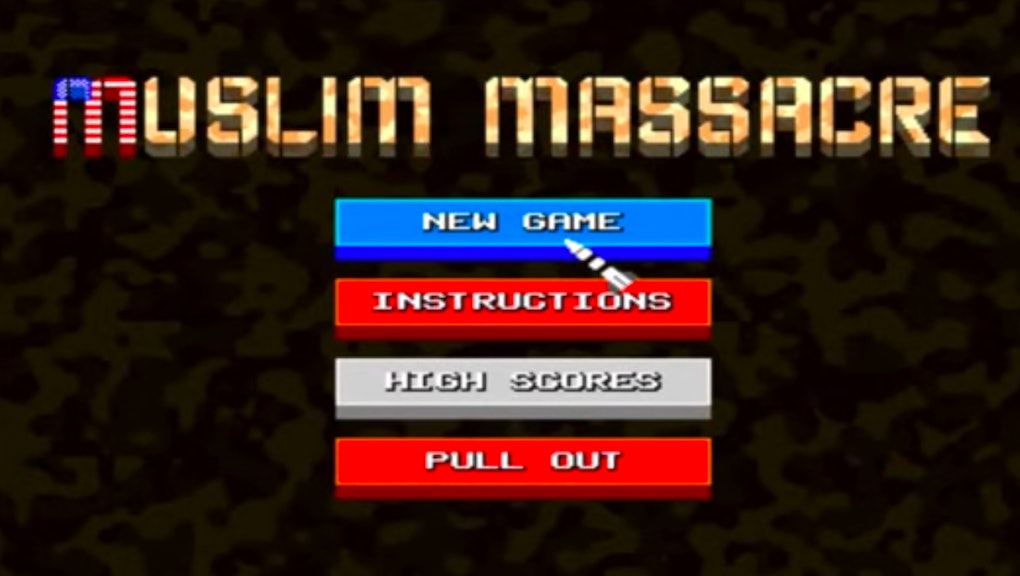 The neo-Nazi game Zog's Nightmare, one of the most violent, anti-Semitic titles ever released, has an equally horrific soundtrack that mocks a trio of Jewish rappers. Imagine the Beastie Boys' "(You Gotta) Fight for Your Right (to Party)," but instead of the original chorus, the line goes, "You gotta fight/ For a white/ Country." It plays in the background as you face off against an army of Jewish soldiers with yellow stars pinned to their uniforms.

You won't find this kind of white supremacist sentiment in blockbuster video games or popular indie titles. For racist gamers, there's a whole subsection of releases made by and for neo-Nazis — in case racist mods and racially pure mainstream games weren't already enough.

"Zog" is actually an acronym commonly used by white nationalists. It stands for "Zionist-occupied government" and is used to support the conspiracy theory that the world is secretly run by Jews.

The game was released in 2006 by Jim Ramm, an alias for Matthew Ramsey, a former high-ranking member of the National Socialist Movement. According to Stormfront user Mark Hart, who allegedly worked with Ramm, Zog's Nightmare had been downloaded and played thousands of times by February 2008.

To make the game, Ramm used a program called First Person Shooter Creator, which advertises that "no programming or designing knowledge" is required. Because of this easy design process, Hart said that he "only hopes that other racialists will become inspired by what they see and create their own games."

Muslim Massacre is just as horrific as it sounds

Muslim Massacre is a top-down shoot-'em-up released in 2007. The game opens like a classic action movie: A plane flies over an open road in the middle of a desert, a white man with a Rambo-inspired bandana and a parachute jumps out. The rest of the game tasks the player with shooting as many brown people as they can within the allotted time.

According to the Los Angeles Times, the game's creator encourages players to "take control of the American hero and wipe out the Muslim race with an arsenal of the world's most destructive weapons."

While some claim that the game is supposed to act as political commentary towards U.S. foreign policy in the Middle East, it's remained a popular recommendation among neo-Nazi gamers on sites like Stormfront.

Ethnic Cleansing is the most well known neo-Nazi game

The most popular neo-Nazi game by far is Ethnic Cleansing. This game comes up often in discussion within white nationalist digital spaces. It was released in 2002 by Resistance Records, a record label closely associated with the neo-Nazi group the Nation Alliance.

According to TV Tropes, the game allows you to play as a member of the Ku Klux Klan who "goes on a rampage." Your goal is to kill racist stereotypes of minorities, including black people who make monkey noises when shot, Latinos who say "I need to take a siesta" when attacked and Jews who say "oy vey!"

The game culminates with a final boss, Ariel Sharon, the real-life former prime minister of Israel. Despite this now outdated reference — Sharon served from 2001 to 2006 — Ethnic Cleansing shows no signs of losing its relevance in certain circles. The game was featured in the Stormfront forums as recently as April 2017.

Is there any way to stop it?

It might be tempting to stop the creation of these types of games at the root by altering these tools or removing them entirely, but according to Jonathan Vick, an associate director at the Anti-Defamation League focusing on technology and cyberhate, it's not that simple.

"The technology is readily available and that isn't necessarily something you'd want to curtail," Vick told Mic in a phone call. "You don't want to take away people's ability to construct entertainment because of one bad apple."

Vick added that the ADL does work with companies like Google and Apple to maintain standards in their respective app stores, but admitted that it's usually easy enough to find a workaround. "There's always going to be a way to offer direct downloads," he said, "and so there's no way to really prevent that either."

Instead, he said, the best solution may be better education around sensitive subjects like racism, so neo-Nazi games don't become tools for indoctrination. But understanding history won't do much about the games that already exist, freely available for anyone to find.

What's next for neo-Nazi gaming?

It's certainly encouraging that new neo-Nazi games haven't gained much traction in recent years, but the continued interest around these older games — and the popularity of white supremacist mods for popular games — shows that the intersection of gaming culture and white supremacist beliefs is only growing larger.

Based on various neo-Nazi forum threads, it seems the main barrier holding back the creation of new games is graphics quality. For now, there's no easy way for casual gamers to create games that can match the visuals of mainstream releases. However, as those industry tools become more accessible, it's possible we could see another wave of neo-Nazi games — only this time with even more realistic graphics.