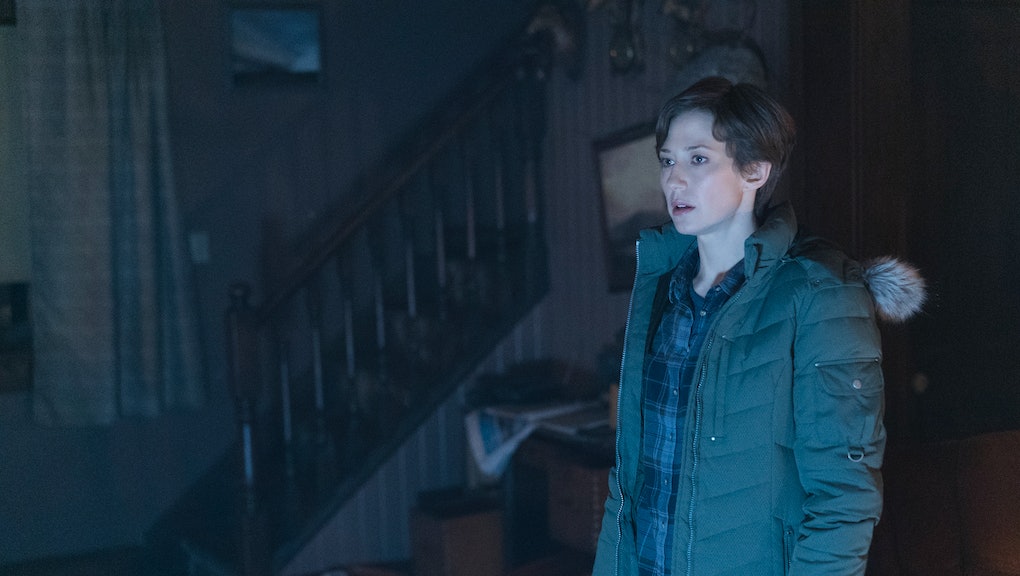 The opening scene of the third season of FX's Fargo doesn't take place anywhere near the Midwest. Instead, we're thrust into a brisk winter in 1988 East Berlin, and an interrogation room between a German captain and a man named Jakob, whom the captain insists is actually someone called Yuri Gurka. The interrogator says he's living in Gurka's current address, so he must be Gurka, while Jakob says he moved there six months ago; perhaps it's just not on record yet. Plus, Gurka is purportedly in his 20s and Jakob is clearly in his mid-40s.

It's a tense sequence, with the interrogator rebuking Jakob's responses as "stories," instead of the "truth." Is he onto something? After all, not only do Yuri and Jakob have a romantic partner of the same name — Helga — but Jakob's thawing away in his seat, which feels like a symbolic impression of guilt. You can read the scene in a few ways, but there'll be no payoff — at least not yet. We're back in familiar Minnesota, now in 2010.

Here we're introduced to the crux of this Fargo tale: the bitter, petty rivalry between two brothers, Emmett and Ray Stussy, both played by Ewan McGregor. Emmett is the "Parking Lot King of Minnesota," and is celebrating his 25th anniversary with his wife, Stella. By Emmett's side (more so than Stella) is his business partner, Sy Feltz, a Stan Grossman-type who always has Emmett's ear. Things are looking good on the surface for Emmett and Sy, and less so for Emmit's younger brother Ray, a local parole officer. Ray attends Emmett's anniversary party, but not out of brotherly affection. He wants Emmett to help pay for an engagement ring to his parolee and now-girlfriend, Nikki Swango, who has arguably the best name in the Fargo canon.

Why does Ray feel Emmett is so indebted to him, that he should front the cash for his engagement ring?

It stems from childhood, their dead father and a collection of stamps. In plain terms, Emmett convinced Ray to swap the stamp collection his father left to him for a red Corvette — which Ray still drives — with the implication here being the stamps were considerably rare. Emmett sold the stamps (and probably jump-started his parking-lot enterprise), but keeps one of the stamps framed in his office: a vintage that depicts the Myth of Sisyphus. The Sisyphus story was also the name of an episode from Fargo season two, and it feels befitting for this season's ethos. Sisyphus was a king, excessively greedy during his life, whose comeuppance in death was to push a boulder up a hill in the afterlife, where every day starts with the boulder at the bottom of the hill once more. A vicious loop.

In essence: karmic justice, dude. If I were to point an early finger at who the Sisyphus of Fargo season three would be, my money's on the Parking Lot King of Minnesota, his brother — or heck, both!

Unsurprisingly, Emmett refuses to help Ray pay for Nikki's engagement ring, which leads Ray to asking for the help of one of his parolees, Maurice, who just failed a drug test. As Ray explains, Maurice had previously served time for, essentially, stealing fancy televisions from rich people's houses. So he has a job catered to Maurice's skill set: break into Emmett's house and steal the Sisyphus stamp (greedy!).

Meanwhile, we're introduced to the well-intentioned police officer of this season: Gloria, played by Carrie Coon. We get a glimpse into Gloria's everyday life. She's a single mother whose 12-year-old son Nathan works part-time at her stepfather's general store. Her stepfather, Ennis, drinks a lot, as evidenced by, well, every scene we see him in. At the store, he takes a swing of hard liquor from behind the counter, and during a family dinner at home with Gloria and Nathan, has at least a couple of beers in him. But Ennis is not all bad — he presents Nathan with a cute little birthday gift, a small statue.

Emmett and Sy's parking lot business hits a speed bump when a mysterious man shows up in their office. The man, V.M. Varga, had apparently loaned them some money the year before. But Varga doesn't see the money as a loan to be paid back, but rather, an "investment" in their business. Is the parking lot industry that fascinating? Evidently not, but Varga sees it as a perfect front for his business — whatever that may be. Given the time period of this season's Fargo, 2010, it's safe to assume the financial crash of 2008 led Emmett and Sy to Varga's doorstep. If Varga's rotting teeth are any indication, this is a bad man indeed.

But wait, isn't Emmett also going to have his house robbed by Maurice? Perhaps if the hapless stoner didn't lose Emmett's address when he put out a joint in his car... after his shrink called him out for getting high over the phone. Maurice does try and connect the dots in his head, and he lands on Eden Valley and the Stussy household. That's all well and good, except Emmett lives in Eden Prairie. The Stussy in Eden Valley is the aforementioned Ennis, Gloria's heavy-drinking stepfather (and you betcha, this has been confusing to keep up with while recapping).

Unfortunately for Gloria — who returns to Ennis' house after Nathan forgets his birthday present — by the time she gets back, Ennis has already been killed. Rather brutally, Maurice glued his mouth and nose shut, obstructing his breathing. He also tore through most of the house to find, yes, some stamps.

While Ray and Nikki are celebrating a runner-up finish at a competitive bridge tournament in Nikki's bathtub, Maurice bursts in with the stamps in hand. He admits that things went south, though he was surprised at how much older Ray's brother was. Definitely a different mother. This is all news to Nikki, but when Ray says he was trying to gather some cash for an engagement ring, she finds the gesture "so romantic." The good vibes don't last long, however, since Maurice completely botched the robbery and murdered an innocent old man. One thing leads to another, and Maurice pulls a gun on Nikki and Ray, asking for $5,000 by tomorrow for his troubles.

As Maurice leaves the apartment, Nikki hatches an incredible plan that feels straight out of Looney Tunes. She begins unscrewing the air conditioner at the front of her apartment, keeping a mental timer of how long it might take Maurice to get down the stairs (no matter, he stops anyway to light a cigarette). With Ray's help — though he's mostly dumbfounded by the entire thing — they drop the air conditioner just as Maurice chills at the bottom of the building. And wham. Dead center on the head — or where his head used to be. As Nikki tells the cops over the phone, she had wanted her landlord to fix that pesky A/C for a while now.

By the end of Fargo's first episode, all the characters are dealing with a major fallout. Emmett is dancing with the rotten-toothed devil, Ray just helped kill someone and never got his precious Sisyphus stamp, and Gloria just lost her stepdad. Chaos reigns once again in the Midwest, dontcha know.