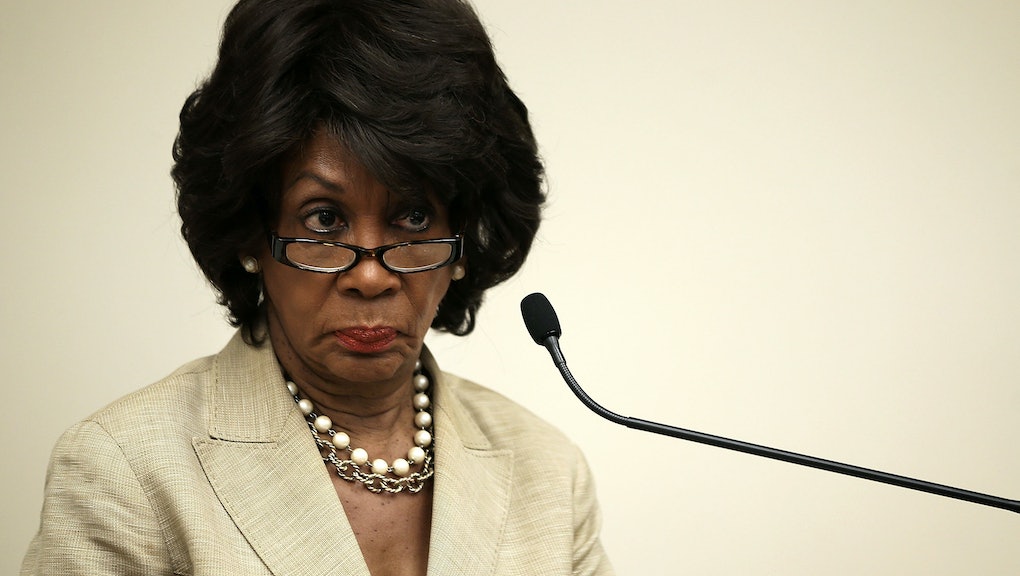 Maxine Waters: One day, Bill O'Reillys "won't be able to buy their way out of" jail time

While Wednesday's news that Fox News finally ousted longtime perv Bill O'Reilly struck many as eminently satisfying, the bleak reality is that the ex-O'Reilly Factor host won't suffer too much for his actions. Rep. Maxine Waters has some suggestions for how justice could best be served, and she shared them in an evening tweet.

"Regarding the news on O'Reilly, a day will come when rich men won't be able to buy their way out of criminal conduct & they will go to jail," Waters wrote, a reiteration of a statement she'd previously made on CNN's Anderson Cooper 360.

It's not the first time Waters has argued that O'Reilly should serve time for his actions. And it's not that Waters isn't pleased: When Cooper asked her if she thought "Fox made the right decision" in firing O'Reilly, Waters responded with an unequivocal "absolutely," adding that she was proud of O'Reilly's accusers.

"I'm so pleased with the women who came forward, who were victims and decided that they were going to expose what had happened to them," Waters said. "You know, Bill O'Reilly is not going to be recorded favorably in history. Unfortunately, he was a man who made tremendous sums of money, had a huge show, and really, there's something wrong with him psychologically."

"I hope he seeks some help, and I hope that the women who have come forward feel good about the justice they're receiving," she continued. "This is an era of women who are fed up with being taken advantage of, particularly in the workplace. We've been hearing about this for years."

Indeed, Fox News had been hearing about O'Reilly's untoward behavior since at least 2002, and rather than taking action at the first complaint, the network helped him cover it up. It took Fox way too long to fire O'Reilly, who had drawn an $18 million salary from the network. If Roger Ailes — whom Fox gave $40 million upon his termination in July  — is any indication, O'Reilly will enjoy a staggering severance package. And then he'll be replaced by Tucker Carlson, another documented misogynist who doesn't really represent improvement.

But Waters, who was recently subject to the racist and sexist abuse O'Reilly has often reserved for black women, sees a silver lining in Wednesday's small victory.

"It has only been in recent years that women have felt strong enough to come forward and to talk about what has happened to them," she told Cooper. "Just think how many women depended on their jobs, and didn't want to lose their jobs, and were afraid to say anything, but things have changed.

"Life is changing for women," she continued. "Women are feeling stronger, coming forward, standing up for themselves, and I know it went on for a long time, but thank God it stopped now with Bill O'Reilly at Fox."