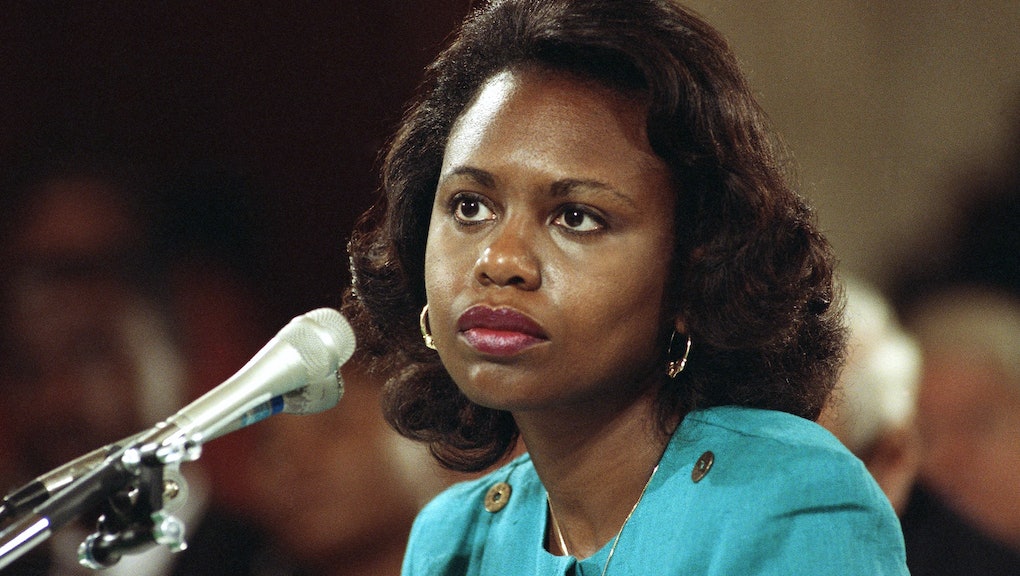 It's been 26 years since Anita Hill sat before an all-male Senate panel and accused then-Supreme Court nominee Clarence Thomas of workplace harassment.

At the time, Hill recounted Thomas talking graphically about sex and pornography and discussing his penis size in the workplace after she rejected his many requests that she go out with him. Thomas denied the allegations, insisting he was a victim of a "high-tech lynching" from white liberals who were trying to block him from the Supreme Court seat — a seat that, even after Hill's testimony, he was voted into, and still occupies.

Hill's story still sounds all too familiar. But in a Wednesday interview with USA Today, Hill said the backlash against the now-ousted Bill O'Reilly proves women have made some progress.

"The idea that these kinds of behaviors can stay hidden is fading because there are ways to get them out," Hill told the outlet. "I think the key is to keep pushing. When you deal with someone like Roger Ailes and Bill O'Reilly, the key is for people to keep coming forward."

Hill, however, said we still have the tendency to view sexual harassment as an "individual problem" rather than a larger societal issue having to do with institutional sexism.

"The problem with sexual harassment isn't just because people behave badly," Hill said. "The problem is our inability to develop productive responses to it, and that exists because of our culture that accepts it, because that culture then gets built into how we approach solutions to it."

In O'Reilly's case, many were eager to dismiss the testimonies of multiple women, insisting that allegations were not proof. Meanwhile, Fox News demonstrated that it was more than willing to tolerate O'Reilly's alleged treatment of women — which persisted over his 21 years at the news station — until it became a PR issue affecting its bottom line.

Until women's stories are believed, until institutions take swift action against their perpetrators, Hill said, society still has a long way to go.

Like many others, Hill couldn't help but think of what it meant that an alleged sexual predator occupied the White House amid such a major sexual harassment scandal.

Hill said President Donald Trump's win is just another example of people's willingness to tolerate the mistreatment of women for a greater perceived good.

"We have a whole host of people accepting that as just something men do as opposed to understanding it as predatory behavior that is not only immoral but is also illegal," Hill said. "We really do have to change public awareness."