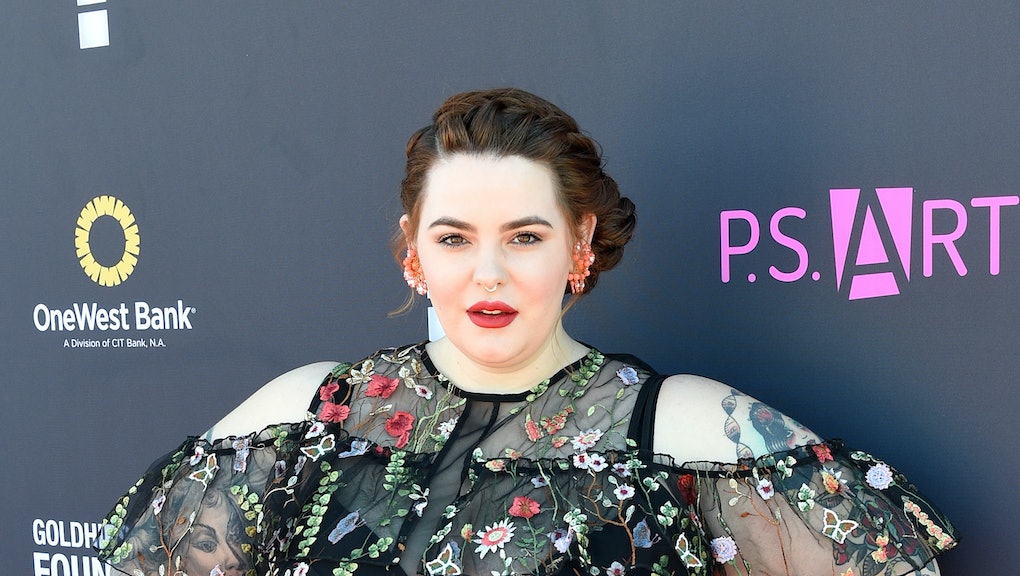 Model Tess Holliday has been a longtime champion of body positivity, making history as the first size-22 model on the cover of People and even launching a hashtag — #EffYourBeautyStandards — which calls on people to respect and appreciate their bodies, no matter their size or shape.

But still, even now, Holliday is forced to defend her body — and her health.

This was made clear by a video Holliday posted on both Instagram and Facebook, showing her getting questioned about her weight and health by an Uber driver.

After you hear the driver say the word "cholesterol," Holliday can be heard responding: "My cholesterol's fine I'm perfect. Yup, I'm healthy."

"Hey Uber I don't pay more to use your 'black car' service to be told that there's no way I could possibly be healthy because I'm fat & then questioning it," Holliday wrote in the caption. "No one should have to tolerate this at any level of the services you offer."

After this altercation, Holliday is vowing to never use Uber again.

"I'm fat. I also have a fat wallet & will no longer be using your services. Ever," Holliday wrote. "Also after I told him I was healthy he turned the radio off & changed the subject."

According to Holliday, she posted the video in an effort to show what she deals with daily and "why this behavior is unacceptable from anyone."

Plenty of people were immediately supportive of Holliday, writing things like "It's her body, her choices and her business," on Instagram. But plenty others too questioned Holliday posting the video in the first place, and calling for an Uber boycott. "Sorry dear but it's not the company that was at fault here, it's 1 driver. Give me a break!" one commenter wrote.

"To everyone that keeps saying, 'Well we don't know the full conversation,'" Holliday wrote, "I say REALLY?! He wasn't 'curious'  he was shaming me. End of story."

"I own a car, I have a driver but was in a situation where I needed to use Uber," Holliday confirmed.

In a comment to Mic, Holliday said that Uber has reached out since her original post, but didn't really give her what she wanted.

"Uber did reach out, they called me yesterday out of the blue to say they were sorry and refunded my trip, but that's not what I wanted," Holliday said. "I wanted assurance they would properly train their drivers to ensure this doesn't happen again at any level of their service but all they said was that it was unacceptable behavior and goes against the code of conduct the drivers agree to before working for uber. I'm still really disappointed."

The kind of shaming Holliday experienced in this case stems from this idea that women who are plus sized are inherently unhealthy.

Lately, there's been a few women who have called out this idea, including yoga teacher Jessamyn Stanley, who told Runway Riot in 2016: "A healthy fat person is an oxymoron to most people. People don't realize that they can't tell anything about someone else's health by just looking at them."

But still, obviously, this idea that women above a certain size can't be healthy and can't have things like good cholesterol pervades.