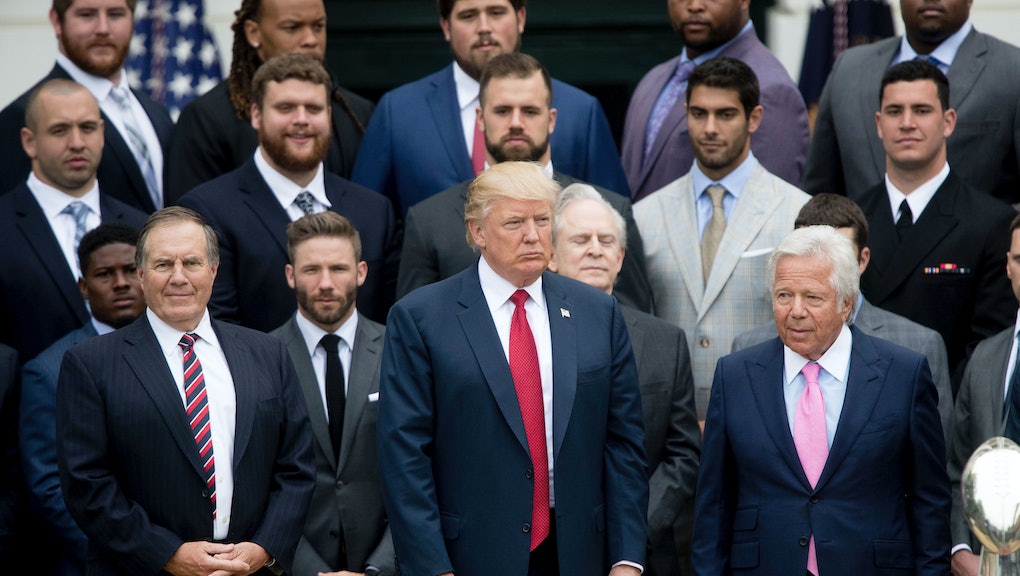 Unlike his inauguration, Donald Trump's meeting with the Patriots was well-attended

For once, President Donald Trump was right about a crowd size.

On Thursday, Trump used Twitter — duh — to rail against the "failing" New York Times for their "big lie" about the Super Bowl champion New England Patriots' visit to the White House Wednesday.

The 2015 photo shows Patriots players and staff packed into their photo with Obama on the South Lawn and smiling as they pose with the president. The 2017 photo tweeted by the New York Times shows a significantly smaller, more subdued-looking crowd of Super Bowl champs.

The comparison seemed to recall the difference in Obama and Trump's inauguration crowd sizes that the president is still possibly obsessing over. In the case of the meeting with the Patriots, it seemed plausible that the photo would show fewer members of the organization in light of the fact that a number of players boycotted the visit with Trump, who has a long relationship with the Patriots organization.

But the New York Times' comparison Wednesday was apparently, to borrow from Trump's lexicon, "FAKE NEWS."

On Twitter, the Pats refuted the tweet, explaining that while, in 2015, staffers were on the stairs, they were seated on the lawn this time around, out of view of the cameras.

The team also posted a photo appearing to show more members of the organization posed with Trump thanking the president for his "gracious hospitality."

So the New York Times appears to have been wrong. But, unlike Trump, who doubles down when caught in a falsehood, the paper owned up to it.

"I'm an idiot. It was my idea, it was my execution, it was my blunder," Stallman said in the statement. "I made a decision in about four minutes that clearly warranted more time. Once we learned more we tried to fix everything as much as possible, as swiftly as possible and as transparently as possible. Of course, at that point the damage was done."

So, yes, Trump did catch the New York Times in a "lie." Perhaps next he can address those 394 false or misleading claims.