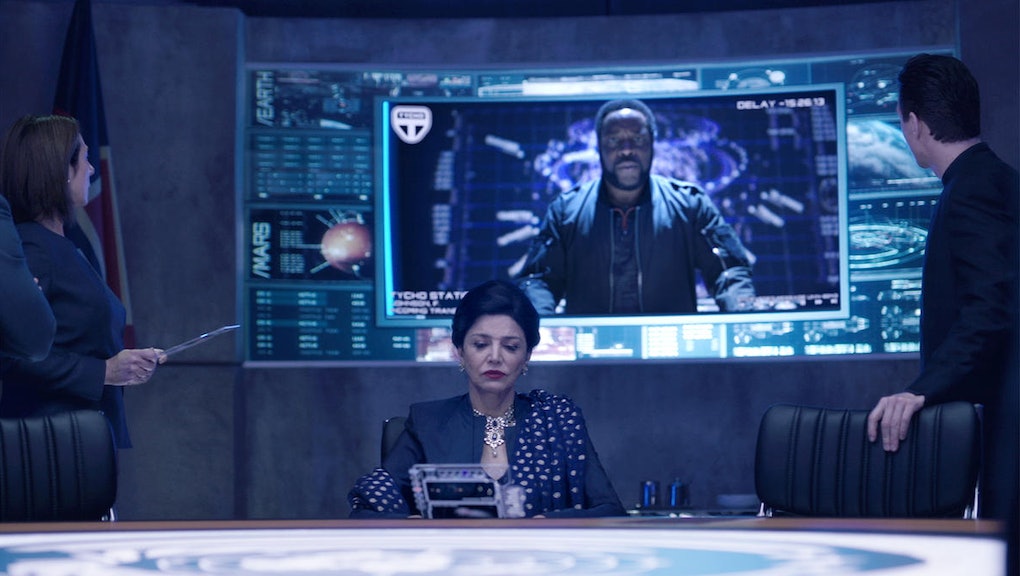 'The Expanse' season 2 was the gripping, unsettlingly timely show we needed in 2017

There's so much to like about Syfy's The Expanse, even without digging into its subtext. There are engaging, complex characters who are tasked with difficult decisions on the daily, a mysterious alien organism that could wipe out the human race and enough shocking twists to keep you on the edge of your seat. It is, quite simply, the best thing to come from Syfy since Battlestar Galactica.

Last year, I wrote about how The Expanse was the most surprising show of 2016, in part because Syfy hadn't produced such a quality drama in a long time (now they have a couple, if you also include The Magicians). Season one didn't always fire on all cylinders, but it provided some fascinating world-building to keep viewers invested while the far-reaching plot found its footing. Fast forward to season two, which concluded Wednesday night, and you have a series with enticing possibilities for its future. As one colleague discussed of future seasons, Star Trek-like voyages into the vast expanse of space might not be out of the question.

Why exactly would that happen? Because mankind may ensure mutual destruction by messing with an uncontrollable substance. Essentially, a more fantastical, fictionalized version of nuclear warfare.

In the future The Expanse presents, humans have colonized most of the solar system, and there are three main factions. There's Earth; a colonized, independent Mars; and the Outer Planets Alliance, which is comprised of people working across the asteroid belt, typically referred to as Belters. Mostly from the ongoing tensions between Earth and Mars, a game-changing organism is thrown into the fray: the Protomolecule.

The Protomolecule to The Expanse is what the White Walkers are to Game of Thrones: the wild card that threatens to completely upend, well, everything. We first see the Protomolecule on the asteroid station Eros back in season one. In a more controlled area, it wipes out the entire population of the station. Now, it would be one thing if the Protomolecule just killed humans efficiently, but it does more than that. It evolves.

In season two, when the Rocinante crew attempts to destroy Eros station by hurdling it into the sun with a giant Mormon spaceship (yes, really), the asteroid moves out of the way. It basically becomes sentient, and begins hurdling itself toward Earth. It's only through Miller's heroic sacrifice — The Expanse's Ned Stark equivalent — that the asteroid instead lands on Venus. That isn't, however, the last we see of the Protomolecule.

Not only is it revealed that Mars and Earth are both interested in the Protomolecule becoming weaponized through a third party — including Martians killing their own Marines in what was a battle test of the Protomolecule fused with a human — but the organism that crash lands on Venus continues to transform. When a research vessel from Earth takes a closer look, it literally disassembles apart the ship; much to the amazement of the ship's scientists in their final moments.

Yet despite these very clear warning signs — this thing is fucking dangerous! — humans are persisting with it. As the final shot of season two reveals, there's a whole slew of human-Protomolecule hybrids that are tucked away on one of Jupiter's moons. Meanwhile, Naomi, one of the characters aboard the Roci, admits to her love interest Holden that she didn't destroy a Protomolecule sample they procured earlier in the season. Instead, she put it in the hands of OPA leader Fred Johnson. The main reason: so that the Belters could have their hands on the same weapon of Earth and Mars.

Naomi's reasons make sense to her character — and it's not a knock on her for doing so — but this isn't going to end well for any of the factions involved. One of the taglines for season two was "The stars are better off without us," and mankind's handling of the Protomolecule is proof positive of this. That the Protomolecule creature the Roci crew battles in season two's finale is addicted to radiation is a fitting analogy for what amounts to a fantasized version of nuclear weaponry.

It's also disturbingly prescient for 2017. We have an administration trading jabs with North Korea, and while the threat of nuclear warfare has been greatly exaggerated, it's still an unsettling prospect to see on the news. As Tufts University professor Daniel Drezner explained in a piece for the Washington Post, The Expanse is delivering some of the most relevant discussions about international relations on television.

"The Expanse recognizes that space travel doesn't end political division — indeed, it creates opportunities for new cleavages to form," Drezner wrote. "That's just a fact of life. And, right now, it offers the optimism of the Earth actually existing 200 years in the future."

In the scope of the show, however, that optimism might soon wane. If no single interplanetary power understands the inherent danger of the Protomolecule — especially after it nearly crash-landed on Earth — then the solar system might be beyond saving in season three and beyond. Truly, the stars would've been better off without us.

The first season of The Expanse is available to stream on Amazon Prime. A handful of season two episodes are currently streaming on Syfy's website, available with a cable login.