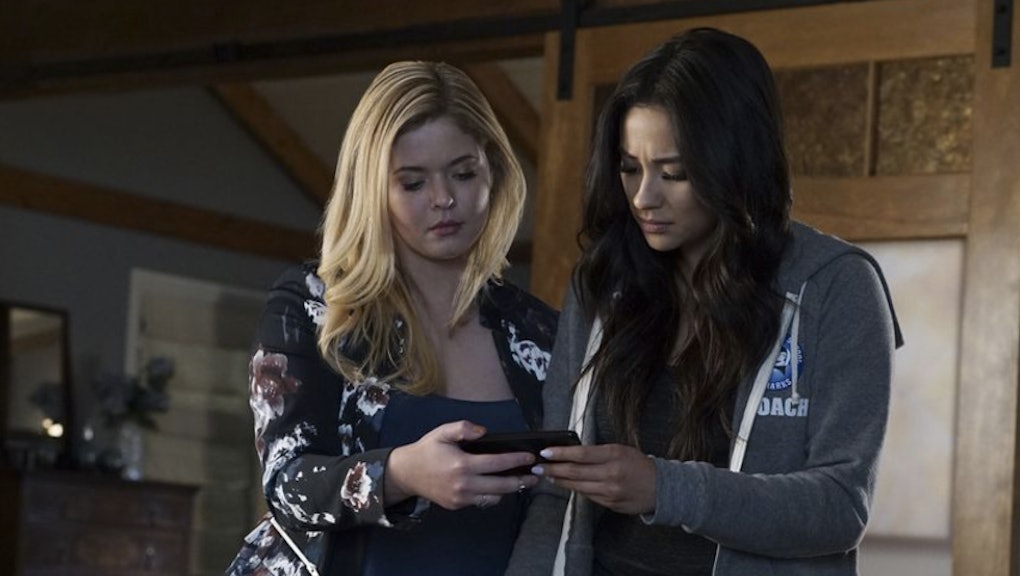 As Pretty Little Liars propels towards its "endgame," theories are forming every few minutes, speculating different ways in which the many and varied unanswered questions the show has left unresolved could be wrapped up. There's no shortage of births, deaths, family mysteries and secret identities in Rosewood, and a lot will have to happen in the final nine episodes for everything to be resolved by the show's finale. Below are just a few theories on how the many mysteries of Rosewood could all be connected.

1. Alison is pregnant with Emily's baby

Much of season seven's first half was spent on the story of Emily donating her eggs to earn the money she needed to go back to college. But the facility where her eggs were being stored was one of A's targets, and the eggs were destroyed. Given Alison's husband's evil plot — keeping his wife drugged and hospitalized for days on end — which was followed by her unexpected pregnancy, the possibility that Rosewood's resident mean girl is actually carrying Emily's baby isn't impossible.

2. Wren and Archer Dunhill were working together

We know Wren is going to be a part of the last ten episodes, and, even though the Liars buried Archer Dunhill/Elliot Rollins after Hanna hit him with a car, we also know that in Rosewood, that doesn't mean he's actually dead. These two have a lot in common: They're both British, they both work in the medical field and despite being seriously sketchy and potentially evil, they're both very handsome.

3. Charlotte, Mona, and all the other people who were revealed as A were all just working for Uber A.

Mona was revealed as "Original A" in season two's "Unmasked." From season three to season six, "Big A" tortured the girls until she was exposed as Charlotte, formerly Charles DiLaurentis. We know Lucas was involved, thanks to Mona's Q&A session in season four, and there's no way Melissa isn't a part of this somehow. What if they all were working for the same person?

During the all-too-lengthy number of episodes spent on Aria's brother, Mike and his troubled behavior, Aria's parents referenced Scott Montgomery, Byron's mysterious brother who possessed a vague history of mental illness. Scott has never appeared on the show (that we know of), but he was mentioned during a heated argument between Ella and Byron, over whether to continue with Mike's talk therapy or send him to a psychiatrist.

"I don't think we should be giving Mike space," Byron said, Cosmopolitan reported. "My parents gave Scott space, and you know what happened to him ... when I went up to talk to Mike, he was rolled up in a blanket. It was like I wasn't even there. And I saw my brother. What if there is something more going on here?"

What if Scott was sent to Radley and had an affair with Mary Drake and Aria is their child? And what if "A.D." stands for "Aria's Dad"?

As heartbreaking as it is that one of the original four might be the person who's been torturing them for all these years, who else would know all of their secrets? Who else would know the intimate details of their lives? And who else would dole out torture in such uneven doses? Aria always got off the easiest of the four, and she always seemed more preoccupied with her relationship than with catching the Big Bad. If Mary and Scott are Aria's parents, and she inherited their mental illness, it's possible that she might be the one behind all of this.

And Lucy Hale, who plays Aria on the show, even hinted at an upsetting reveal coming from her character in the final season.

"You'll see a dark side of Aria," Lucy told Hollywood Life, adding, "I was so excited because they finally gave Aria something really dark to do. So these last 10 episodes are my favorite, at least for Aria. You get to see a not so nice side of her. She may or may not betray her friends. So it was cool to get to do something a little different."