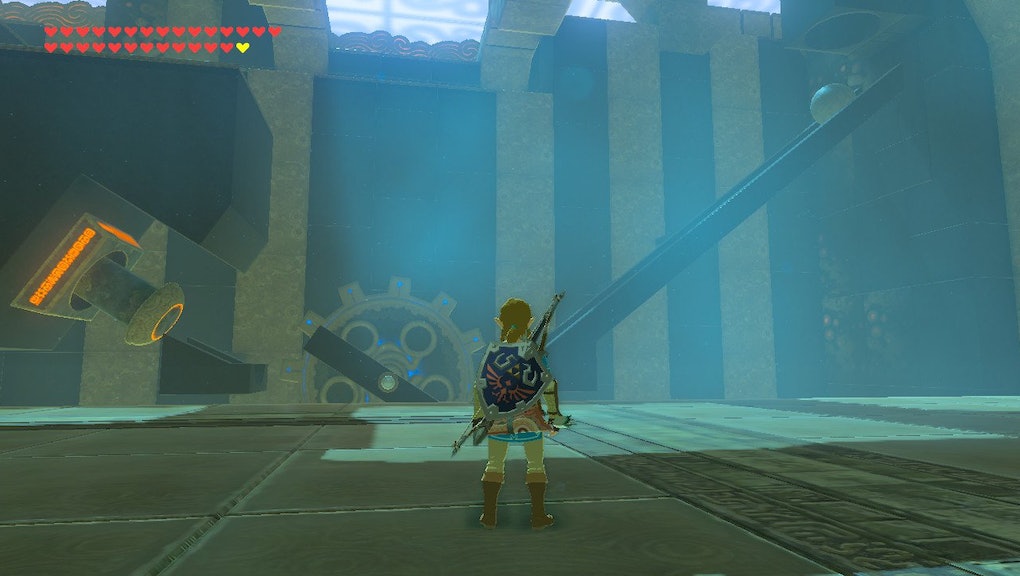 Making things smash into other things at high speeds is always a good time. The Legend of Zelda: Breath of the Wild lets you do this with the Stasis rune to great effect, with the Dunba Taag Shrine in northwestern Hyrule specifically asking you to take advantage of its power.

First, as always, you have to find the Dunba Taag Shrine. Thankfully, there isn't really a secret to this one: Simply go to the point indicated on the map below and paraglide safely down into the chasm to find the shrine waiting for you.

Once you're inside, you'll find a series of Stasis challenges. I'd recommend bringing some two-handed blunt weapons if you can, but pretty much anything will do in a pinch. For the first challenge, all you have to do is stop the big gear for a moment when the platform is aligned with the ramp that the giant rocks are rolling down. Hopefully, the rock will pick up enough speed to fully depress the switch on the wall, but if it doesn't, you can keep doing this until it's depressed; it doesn't reset or anything.

After that, you come to three challenges that can be done in any order, with two of them netting optional chests and one of them opening the door to the end of the shrine. First, let's take a left into a chamber with some stone cubes on the other side of a chasm. Use bombs to clear out the cubes, which are shielding another switch in the wall. Pick up one of the barrels nearby, place it on the elevated platform and Stasis smash it into the switch. Aiming this can be a bit tricky, but it's simply a matter of trial and error.

Exit this room, turn left and walk into the next chamber, which has a big rock close to a ramp. This one is easy: Push the rock over to the ramp, trigger Stasis and smack it a couple of times. All you need to do is get it over the ramp, where it will depress the switch and open the door on the other side.

Now that you've gotten the optional puzzles out of the way let's finish the shrine. Exit this room and walk over to the chasm with a large stone slab standing upright on the other side. This one is pretty self-explanatory: Place a barrel on the elevated platform, use Stasis and hit it until the arrow turns red. It'll knock down the slab and open the door to the end of the shrine.