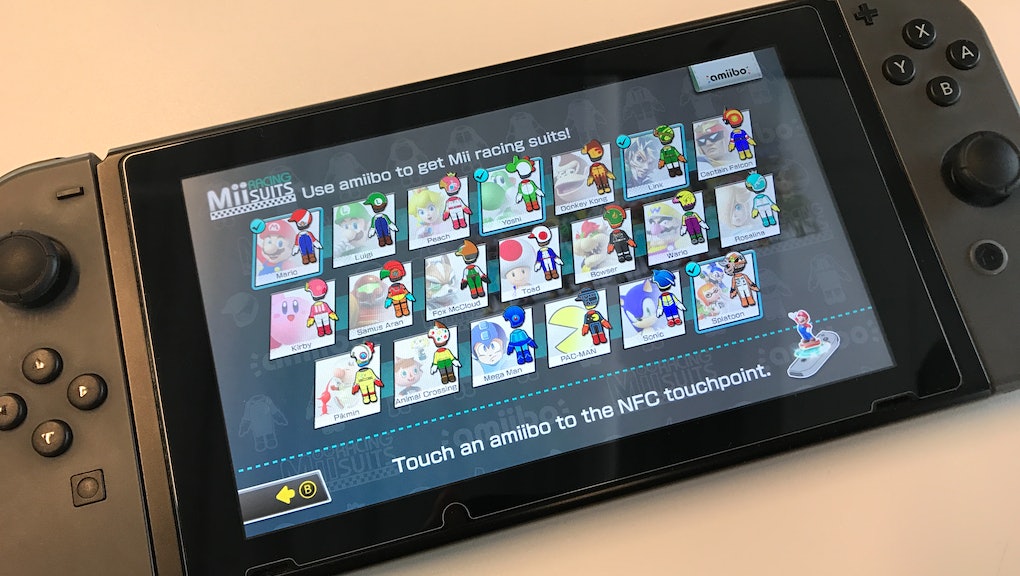 Mario Kart 8 Deluxe amiibo support on Nintendo Switch, for some, may be the most important feature of the game. While racing, the characters or the new battle mode may be crucial for some, others are wondering how the heck can they make use of all the $15 toys they've been collecting. If you have one or two of the NFC-enabled figurines, you're in luck: the Switch version of Mario Kart 8 will support 20 different amiibo. Without further ado, here are the amiibo Mario Kart 8 Deluxe supports.

Those familiar with amiibo support on the Wii U version of Mario Kart 8 can expect similar functionality here. Like the game before it, MK8 Deluxe unlocks outfits for Mii racers based on the amiibo used. Using a Link amiibo, for example, will give your Mii a Zelda-themed clothing option. Touching a Sonic amiibo to your system will offer your Mii an outfit based on the hedgehog, etc. Worth your $15? We'll let you be the judge.

The main differences between the Wii U version and Switch version of Mario Kart 8 is Splatoon amiibo support and Fox getting his last name on the menu screen. We know you've all been waiting.

According to IGN and our review copy of the game, here's what amiibo you can look forward to using that were also compatible with the original Mario Kart 8:

Additionally, Mario Kart 8 Deluxe is compatible with tons of new amiibo which you can check out on Nintendo's amiibo support website.