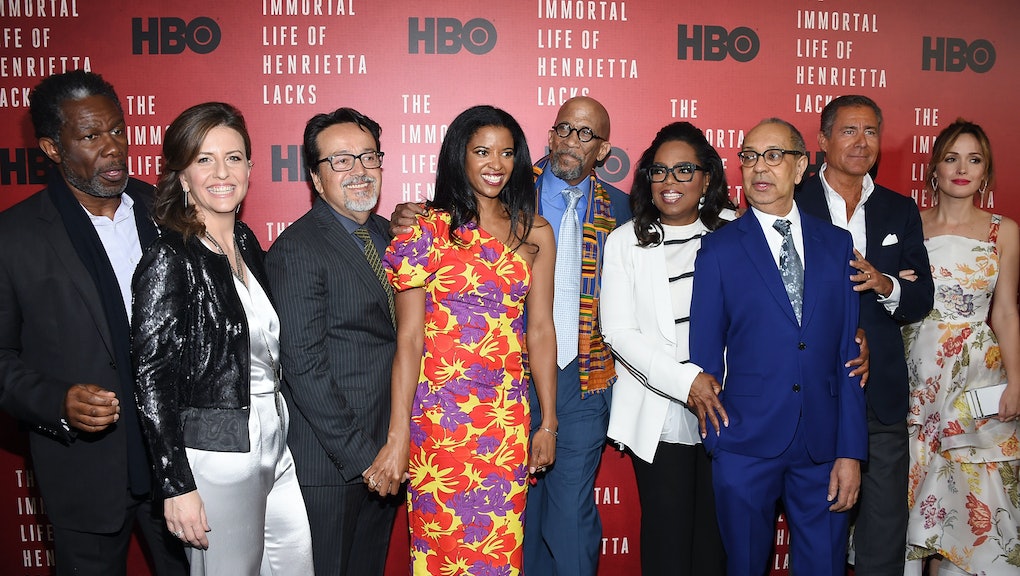 'The Immortal Life of Henrietta Lacks' Review: Does the HBO film do the book justice?

The goal of journalist Rebecca Skloot in writing The Immortal Life of Henrietta Lacks was to tell the story of the woman, not her cells. The book, which provides great detail about Lacks' life, does that. Unfortunately, the movie does not.

After dying at age 31 of cervical cancer while being treated at Johns Hopkins Hospital, Lacks' cells were removed from her body without consent and turned out to be the first immortal cell line in medical history. Those cells were used in the research that contributed to major medical breakthroughs, including in vitro fertilization and the AIDS cocktail.

Referred to as HeLa, the cells' origins were unknown to many until Skloot became determined to write about the history behind them. She tracked down Lacks' family for a book that did not yet have a publisher. The Immortal Life of Henrietta Lacks went on to be a New York Times bestseller that was then adapted into this well-intentioned and wonderfully cast, but ultimately disappointing HBO film.

Starring Rose Byrne as Skloot and Oprah Winfrey as Henrietta's daughter, Deborah, the film opens with a black-and-white montage of newspaper headlines and scenes in laboratories that detail the impact the HeLa cells had on scientific research. It also bluntly informs the viewers that Lacks' cells were taken "without consent." Those words inspired hope that the film would go into detail about the moral and ethical issues that Lacks' story present in the medical industry.

Skloot's book, which is almost 400 pages, manages to incorporate both the scientific and personal narratives that comprise the story of HeLa. Even though Lacks' cells permanently changed the medical industry, her family never benefited financially from their use. The movie, directed and co-written by George C. Wolfe, runs less than two hours and attempts to address all of the story's elements  — scientific, medical and personal. Due to its limited length, it isn't able to do any of them justice.

Byrne plays Skloot as an ambitious, nervous reporter who ingratiates herself with the suspicious and guarded Lacks family, all of whom doubt her motives and question if she is actually working independently. Her motivations for pursuing a book that does not have a publisher are only mentioned in passing. To understand why a reporter would devote so much of her time and limited financial resources to a subject requires some explanation, and the film does not provide it.

Much of Skloot's time is spent with Deborah, brought to life by Winfrey in a grounded and heartfelt performance. Having lost her mother as a baby, Deborah is deeply affected by what happened to her mother's cells. The character vacillates between warm and loquacious and paranoid and schizophrenic. Thankfully, Winfrey portrays all of Deborah's characteristics without exploiting them, including the emotional struggles of growing up without a mother, being taken advantage of by systems that she didn't understand, and suffering physical abuse after Lacks' death. Sadly, there is too little time to devote to Deborah's own story.

All of the talented ensemble breathe as much life as they can into their brief moments on screen. Courtney B. Vance stands out as Sir Lord Keenan Coefield, an smooth-talking con man who attempts to take legal and financial advantage of the family.

Lacks is played by Renée Elise Goldsberry, a Tony winner from the original Broadway cast of Hamilton. Goldsberry captures Lacks' strength and spirit through extremely fleeting flashbacks of Henrietta's life: playing with her children, dancing with her friends or entering the hospital for treatment. Filmed in nostalgic sepia tones, these moments are perhaps a bit too sentimental, but Goldsberry grounds them with her performance.

While the sentiment of the film is presented clearly, the racial tension is not given enough attention. Mentioned in passing are the Lacks' suspicion of Johns Hopkins performing medical tests on black locals, and Deborah's sister, Elsie, who was institutionalized, but the subjects are not given the detail that the book provides. (When confronted about drawing blood from Lacks' children without informing them of why, a doctor says flippantly, "It's not like those people would have understood anyway.")

With such moving performances, especially from Winfrey, The Immortal Life of Henrietta Lacks is a worthy contribution to Lacks' story. But one hopes it will also inspire people to read the book.