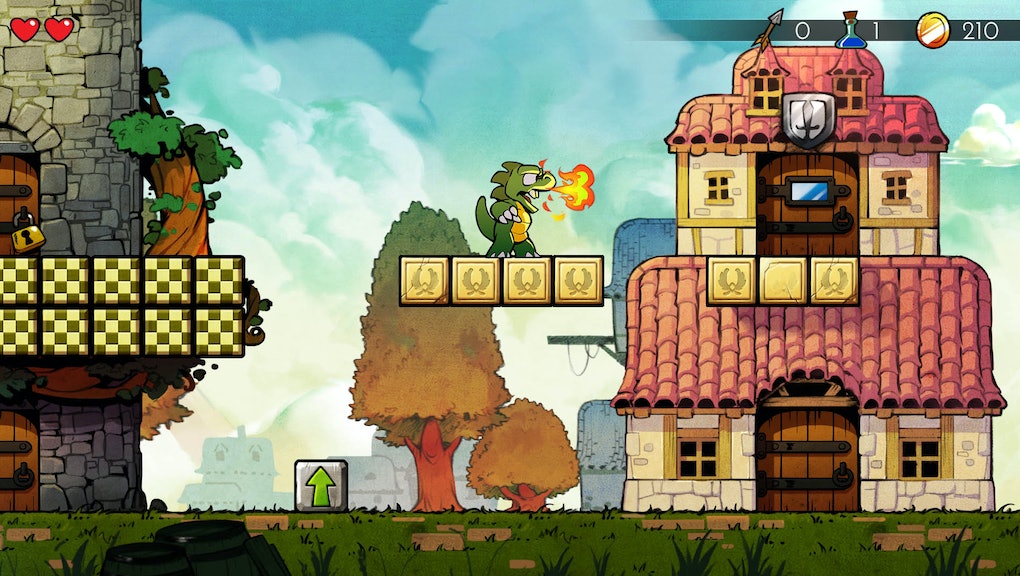 People like to bemoan remakes or re-releases because, of course, we want new things all the time. The problem with video games is that they tend to not be forward-compatible with new technology in the same ways as movies and music, so there's a legitimate case for constantly releasing games over and over again for the sake of archives if nothing else.

Another problem is that old video games can be tough to go back to. A seminal classic like GoldenEye 007, for example, is nigh impossible to play and fully appreciate if your introduction to shooters was Halo. Should new versions of old games remedy old problems, or is that a sin on par with the retroactive Computer Generated additions to the original Star Wars trilogy?

As far as I'm concerned, LizardCube has struck an excellent balance with Wonder Boy: The Dragon's Trap.

Wonder Boy III: The Dragon's Trap came out for the Sega Master System in 1989. That was Sega's NES competitor, their lesser-known console that came before the much more popular Genesis (or Mega Drive everywhere but North America). You're forgiven if you've never seen or played it. Here is what it looked like:

That's a fairly crisp and colorful looking 8-bit game, right? There's nothing wrong with it, per se, but to people with more modern sensibilities, the visuals might not exactly entice you into playing it. If that isn't good enough, LizardCube went and completely reimagined the way the game looks and sounds. Here is the same level in the new style:

Let me cut to the chase: The work that LizardCube has done to visually modernize The Dragon's Trap is nothing short of extraordinary. Static, repetitive backgrounds have been replaced by vibrant, layered worlds that suggest a universe that has far more to it than what we see in the game. It is, without hyperbole, one of the best looking sidescrolling games I've seen in years.

The fact that you can switch between visual styles with the press of a button only puts an exclamation mark on the work LizardCube did.

What makes this so impressive is that, even though it's visually an entirely different beast, it is exactly the same game. The controls, level design and quirks that are inherent to old games are all still there. LizardCube didn't compromise or dumb down a single part of it. They merely took an old game and made it new again.

The odd thing about The Dragon's Trap is that its slavish devotion to recreating the original game could end up making it a tough sell for some players. Sometimes, old games are weird and stubborn in ways that new games aren't. Developers didn't always feel the need to include things like checkpoints in levels, for instance.

The Dragon's Trap's main two hooks are its transforming central character and its rudimentary open world. Every time you defeat a boss, you're cursed to play as a different form until the next boss fight. Your lizard form can breathe fire, your mouse form can latch onto ceilings and walls, and your hawk form can fly. It brings a ton of variety to what might otherwise be a pretty but bog-standard action platformer.

It's the way that these forms are baked into the world design that make The Dragon's Trap worth revisiting in 2017. Instead of a linear progression of levels, every level branches off of a central town area where you respawn every time you die. Each new form allows you to reach a new area you couldn't reach before, giving it a rudimentary Metroid navigational style.

The game has precious little in the form of tutorials or hints, so it's your job to poke at the world with each new form or power-up until you figure out where to go next. This, combined with the fact that you respawn at the town instead of at checkpoints, can be frustrating if you're more accustomed to new games. It is, in all honesty, a bit dissonant that the game looks so slick and new but feels as old as it does.

I've immunized myself against old game design, but some people in their mid-'20s or younger haven't done that, and I totally understand. This is a challenging game made harder by the fact that it isn't interested in holding your hand. Even as someone who had never played the original, I'm having a mostly great time banging my head against its challenges because it looks so fantastic. If you want the perspective of someone who loved the original, I recommend this piece from Mike Diver at Waypoint.

With Wonder Boy: The Dragon's Trap, LizardCube has successfully made a case for a relatively obscure 30-year-old game in 2017. Given how quickly technology and standards change in video games, that's an accomplishment. You can pick it up on Nintendo Switch, PlayStation 4, Xbox One and PC for $19.99 right now.