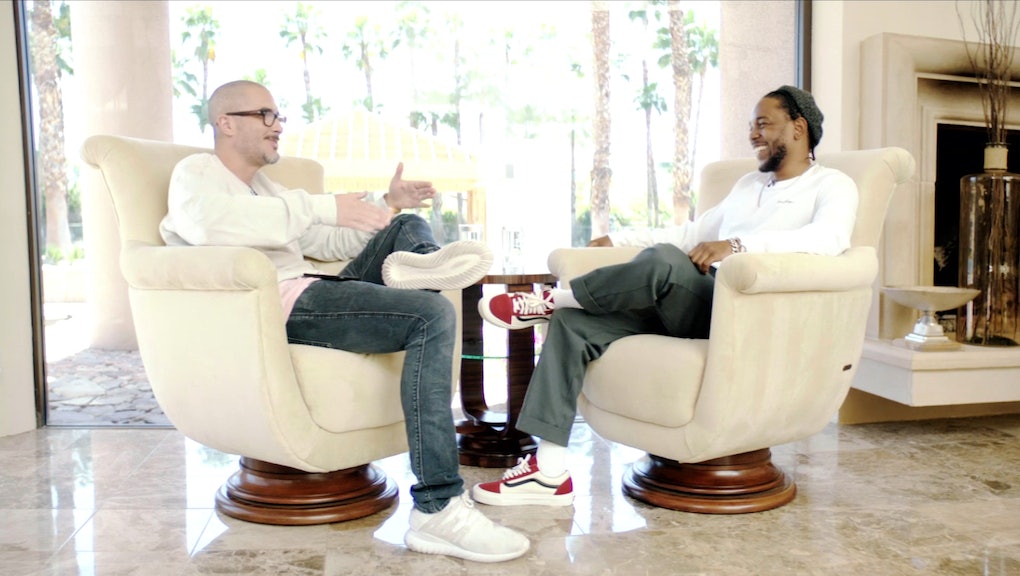 Kendrick Lamar reveals the key reason why Donald Trump was not the main focus of 'Damn.'

Kendrick Lamar's music makes waves in politics, more so than just about any other MC today. Former president Barack Obama named Lamar's "How Much a Dollar Cost" as being his favorite song of 2015. "Alright," a confrontational ode to black resilience and self-love, became an anthem for the Black Lives Matter movement. However, in 2017, he left politics behind, for a reason.

During a Friday interview with Apple Music's Zane Lowe, Kendrick's first since releasing his latest Damn., the rapper addressed a question that likely crossed many listeners' minds while making their way through the album.

"I think a lot of people were probably expecting a heavier reflection of this time, because of what had happened with [To Pimp a] Butterfly," Lowe said, "and maybe some people thought because we're in a different place now — Donald Trump's president, is that going to be more heavily reflected in the music?"

Lamar answered it straight, saying that the no. 1 person everybody needs to be focused on at present is themselves.

He continued, nodding to the ongoing resistance we're seeing against certain portions of Trump's agenda:

"You see real different nationalities and cultures are coming together and actually standing up for themselves, and I think that's a pure reflection of this record prior to this even happening prior to even coming out. We say OK we can't control — now we see we can't control what's going on out there. It was a whole other power that be so what we can now is we can start coming together and figuring out our own problems and own solutions. You know I think, I believe, I know, this is what this album reflects."

The statement fits the record in many ways. The closest Lamar comes to acknowledging the Trump are a handful of lines on "Lust," which deal more with the post-election protest malaise.

We all woke up, tryna tune to the daily news

His interview returns to this critique: those dissatisfied with the country's current direction can't afford to become complacent now. His statement also has subtle links to past quotes of his, particularly one of his surrounding the police killing of Michael Brown, which sparked the massive debate around Lamar's seeming willingness to advocate for respectability politics. In a 2015 interview with Billboard he said:

It's still clear that he feels the change needs to come from within and work its way out. However, Damn. is more careful with its prescriptions. It's less soapbox than some of his past works and more self-analysis.

Going back to his Lowe quote, Lamar's right in at least one aspect: As of now, we (maybe, technically) have four years until we can enact a significant political change, plenty of time for everyone to iron out and agonize all of their internal contradictions.