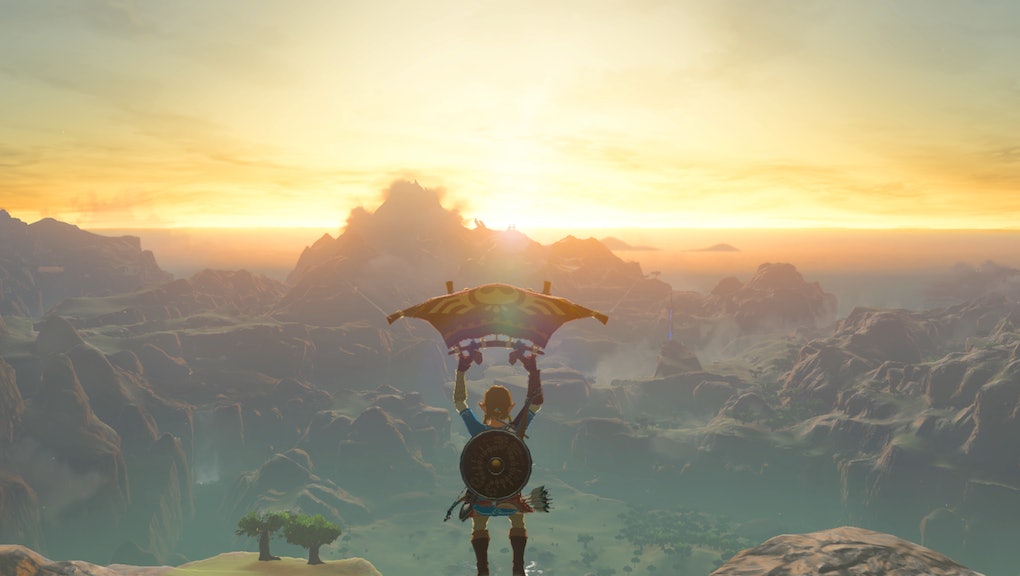 'Zelda: Breath of the Wild' is my favorite game because it satisfies my anxiety

When I was in fourth grade, my best friend Jennifer and I made matching RuneScape accounts. We were in her kitchen, sitting side by side on her dad's two laptops, when we entered Tutorial Island as ninjaboy1570 and ninjagirl01 —actually, it was ninjaboy and ningagirl because she didn't know how to spell, but the sentiment remains the same.

For those who don't know, RuneScape was an mass multiplayer online roleplaying game that was first released in 2001 but reached peak popularity between 2005 and 2007. It's a pretty standard adventure game with quests to finish, weapons to obtain and specific zones for player-vs-player fighting. Among my classmates, RuneScape was known as the go-to game for anyone whose immigrant parents couldn't comprehend spending $15 a month to play World of Warcraft.

But I was never in it for the adventuring. I spent so little time actually fighting anything that if my weapons weren't virtual, they would have had dust on them. I was in it for the moments of calmness, for hanging out with other players in big cities like Varrock or Falador. Spending time in those cities allowed me to be whoever I wanted among other players.

As the little gay kid in elementary school who couldn't wait to leave his small town, I found this feeling relatively new. I could pretend to be a senior in high school who just got accepted into UCLA, a recent college graduate who got a job on his favorite TV show or even a 21-year-old gaming journalist in New York.

As I grew up, I had less time for roleplaying games and started to lose interest in RuneScape. But for a long time after I left the game behind, I expected that I'd never find another game that made me feel so positively about myself. For a while, I was correct. Then I found The Legend of Zelda: Breath of the Wild.

Forget the adventure. It's all about the oh-so-blissful adventure prep.

When I started to play Zelda: Breath of the Wild, I noticed some of my old open-world gaming habits begin to return. I would spend the beginning of each play session fast-traveling to Hateno, Kakariko and Zora's Domain to collect different supplies before I started my day. I'd cook a bunch of food, usually way more than I needed.

I realized that although I love big adventure games, I don't enjoy adventuring. What I actually enjoy is the adventure prep and thoroughly roleplaying the life of my character.

The thing is, when you're adventuring, you're constantly in danger. In RuneScape, you could be ambushed by scary giant spiders. In Breath of the Wild, you can actually be shoved off a cliff by a goat. That's some scary shit.

When I leave one town, I constantly check the map for the distance to the next one. Even though many paths are designed for beginners, I've still got Link's safety in mind. The routes feel like the wilderness in the real world. I can't help but feel like at any moment something can and will attack me.

When I first learned that you could own a house in Breath of the Wild, I audibly gasped. I stopped in the middle of the Vah Medoh dungeon and immediately went to complete that side quest. Since then, I will only turn off the game after I go to my house, undress and save next to my bed.

In a similar way, long before you could own a house in RuneScape, I would log off next to the beds of some in-game character and pretend it was my room instead.

As I've gotten older, I've noticed the different ways gaming can positively affect the people around me and their anxiety. My roommate doesn't know a lot about games, but loves Animal Crossing because it gives him the time to accomplish fun tasks without any major risk of messing it up.

Many journalists have written stellar pieces on anxiety and games. Kotaku's Heather Alexandra has written about how Fire Emblem: Heroes helped with her anxiety and has given her a feeling of structure:

Having something I can play for a few minutes on the subway helps me get through the day. Settling down for a string of battles before I go to sleep has become a welcome and calming ritual. A quick journey to a microverse where problems are conquerable and progress feels tractable.

Similarly, Alanna Okun, formerly of BuzzFeed, wrote about her experience wrestling with anxiety, which she compares to Dark Link, "a twisted shadow version of yourself who mirrors and mocks your movements." For the story, she faced her fear in Majora's Mask — to let the time run out and to lose the game:

Buildings topple. Your enemy laughs. The people who trusted you are crushed under the weight of your failure and you are paralyzed as you watch the life that you've built for yourself violently extinguished in under a minute. And then it stops. The apocalypse has come and gone. You wake up, yet again, on the dawn of the first day.

The reason I loved RuneScape and the reason Breath of the Wild is one of my favorite games is because they both give me the agency to engage in danger on my own time.

Games like Dark Souls or even Shadows of Mordor never appealed to me because they make me feel on edge and continuously put me in dangerous situations.

Instead, Breath of the Wild gives me the space to breathe — and it makes breathing fun. I can spend hours messing around in or near different villages in Hyrule and still feel like I'm playing the game properly.

As a queer person of color, there are few times in my life when I have the choice to opt in or out of tension. RuneScape and Breath of the Wild give me just that — the power to choose when I feel like being in danger. That's a power I intend to utilize.