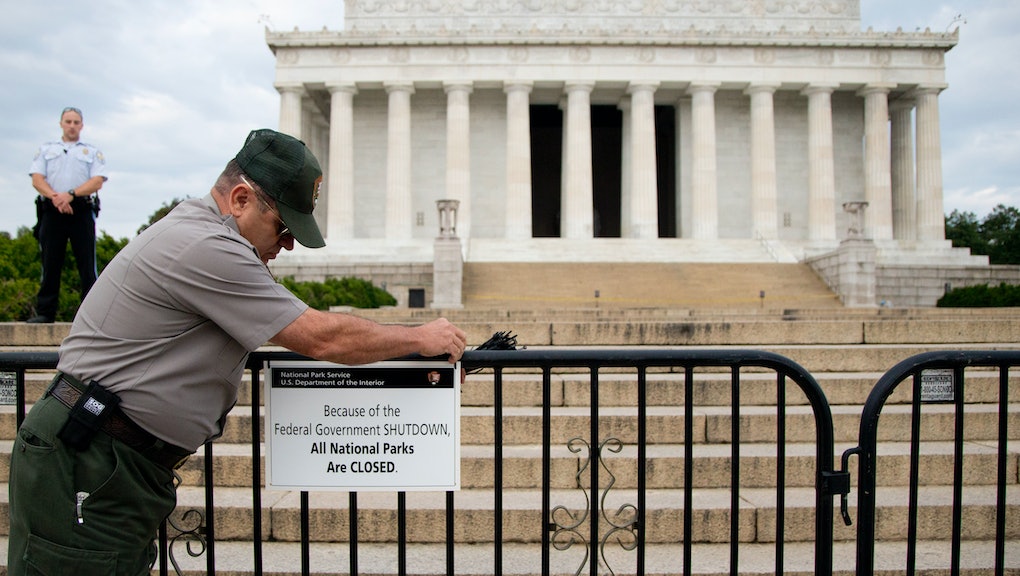 What is a government shutdown? Here's what happens if Congress can't pass a funding bill.

The U.S. government could be heading toward a potential shutdown on Friday if legislators from both sides of the aisle and the White House aren't able to successfully pass a new appropriations bill to fund the federal government.

Such a shutdown would be the first since 2013, when Republican legislators forced a 16-day shutdown over objections to the Affordable Care Act. The 2013 shutdown is one of 18 government shutdowns to take place since 1976, the Washington Post noted, including a 21-day shutdown under President Bill Clinton from December 1995 to January 1996.

But what happens if the government shuts down? If funding isn't passed through Congress by Friday, here's what you'll need to know.

Charles Tiefer, a former legal adviser to the House of Representatives, told NPR that prior to 1980 an inability to pass a funding bill "was not taken that seriously at all" by Congress.

"It was thought that Congress would soon get around to passing the spending bill and there was no point in raising a ruckus while waiting," Tiefer said.

According to the Post, that all changed with Carter's attorney general, Benjamin Civiletti, who issued a legal opinion in 1980 interpreting the 1884 Antideficiency Act to mean that government work must cease if Congress hasn't passed legislation agreeing to pay for it.

Though Civiletti issued a second opinion in 1981 allowing essential government workers to keep working during a shutdown, his opinions sparked the government's current practice of shutting down if Congress cannot pass a bill appropriating government funds.

Of course, there is a temporary solution: To avoid a government shutdown, legislators can pass a "stopgap" funding bill, which would temporarily extend the current government funding until a new deal could be reached.

What will remain open

Not everything closes during a government shutdown. In 2013, Business Insider noted that 80% of federal employees would still be working, even as the government was closed.

Those who still have to report to work, Business Insider noted, include government workers providing essential services, such as active-duty military and key employees in the Department of Defense (including the FBI and CIA), the Department of Transportation and the Department of Homeland Security. This means airports can remain open in at least a limited capacity, as the TSA and the FAA will continue some of their work.

In 2013, the Guardian noted, though many NASA employees were furloughed as part of the government shutdown, the agency still provided support to those aboard the International Space Station. The National Weather Service and National Hurricane Center also continued to work during the shutdown.

Mandatory government payments will also continue during the shutdown, meaning that Social Security, Medicare and Medicaid payments will be made even if the government is closed. Veterans will also be able to continue receiving services through the Department of Veterans Affairs, which, the Guardian noted, has its health programs approved by Congress a year in advance.

The shutdown won't apply to government agencies whose funds aren't solely appropriated by Congress, Business Insider noted. Most notably, this means the U.S. Post Office will remain open — since they generate revenue through postage fees — and passport offices and Amtrak are likely to continue using their own self-generated funds.

Other federally funded places and agencies that are likely to remain open include federal courts, the Patent and Trademark Office, federal prisons, SNAP, public schools and food inspection by the USDA.

Of course, many government services will be affected by a shutdown. Around 800,000 government employees have been furloughed — or temporarily forced to go without pay and stop working — during previous shutdowns, Business Insider noted.

Americans planning trips to any federally-funded spots will be out of luck during a shutdown, as all national parks and monuments, as well as federally-funded museums, will be shut down. That means no trips to Yellowstone, the Grand Canyon, the Statue of Liberty or the Smithsonian — or viewing the National Zoo's live animal webcams.

Though USDA food inspectors kept working during the last shutdown, the Washington Post notes, the FDA's food inspectors — who inspect seafood and dairy — were not. The Center for Disease Control and Prevention, the Guardian noted, also had limited functions during the last shutdown and had to temporarily stop their annual influenza program, which helps to provide Americans with flu shots.

Unlike Social Security and other mandatory payments, many government payments will be cut off during the shutdown. For example: Anyone applying for a federal loan will have to wait for the shutdown to end, CNN noted. Students who receive federal aid may find their payments delayed, as the Department of Education will cease most of its operations.

Other departments that will be closed during a shutdown include the Alcohol and Tobacco Tax and Trade Bureau, Chemical Safety and Hazard Investigation Board, Federal Communications Commission, Federal Trade Commission, Nuclear Regulatory Commission and the Occupational Safety and Health Review Commission.