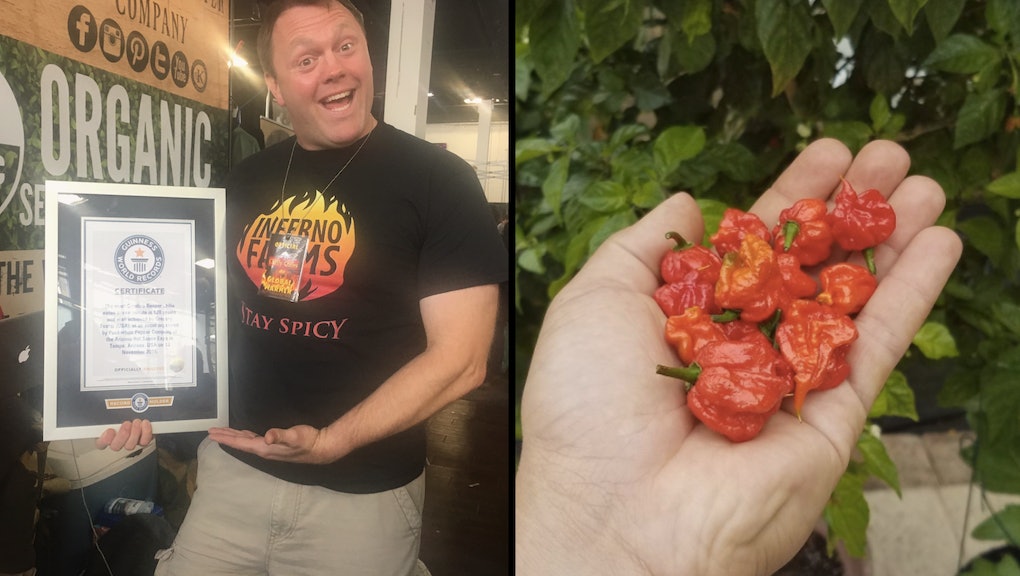 How to survive the world's hottest pepper, according to the Guinness Record holder

At the New York City Hot Sauce Festival on Sunday, hundreds of hot sauce aficionados, aka chili heads, crammed into the Brooklyn Expo Center to witness the Guinness World Record for the most Carolina Reaper chili peppers consumed in under 60 seconds.

The man with a target on his back: Greg Foster, the current Guinness World Record holder from Irvine, California. Foster nabbed the coveted title when he consumed 120 grams of Carolina Reaper pepper in 60 seconds at the Arizona Hot Sauce Expo in November 2016. He beat the previous record — which was set by NYC native Wayne Algenio — by a single gram.

"It's like eating a bowl of lava," Foster said in an interview on Sunday. "Nothing can really prepare you for it. It's next-level pain. You lose your mind and kind of go to your happy place."

Happy place is a generous term for the pain inflicted by the Carolina Reaper, the most fiery chili pepper on Earth. The pepper is roughly 1.5 million on the Scoville Heat Scale, while a humble jalapeño is an average of 3,500. The potent pepper was created by Ed Currie from PuckerButt Pepper Company, a hot sauce producer in South Carolina. The Carolina Reaper's intense heat has made grown men sob and delivered wrenching heart burn to one Bon Appétit writer.

The secret to dominating the Carolina Reaper

Torching your taste buds isn't for the faint of heart, and Foster has mastered the fine art of preparing his mind and body to tolerate the fiery, gut-busting heat.

"When you eat a dense capsaicin, your stomach treats it like a poison." Greg Foster, Guinness World Record holder for eating Carolina Reapers

Just like an Olympic athlete only eats certain foods before a big performance, Foster also tweaks his diet before a pepper eating competition.

He said he wants to have something in his stomach — but not too much. Odds are good that whatever he eats might get purged into a toilet or trash can after he exits the stage, he noted. An empty belly spells disaster — if there's nothing in there, his stomach will also cramp up from the capsaicin, the active ingredient in chili peppers.

"When you eat a dense capsaicin, your stomach treats it like a poison — it will dump calcium, magnesium and potassium into your gut," Foster explained.

To ensure his body has enough potassium and calcium, he'll snack on bananas. "They're high in fiber, smooth and have a quenching property," he said, explaining bananas are incredibly helpful for "offsetting the biochemical reaction" that's about to take place. Plus, he said the smoothness comes in handy if said biochemical reaction later causes him to upchuck. In addition to the calcium from bananas, Foster also gobbles down a handful of Tums before a competition.

Getting into the right headspace is critical, too. Foster meditates right before he competes. "I'll shift off the mind-body connection," he said, explaining his goal is focusing on the motion of bringing the pepper to his mouth while disassociating from the pain. "If you get out of that sensational awareness, you don't give your body time to go into shock."

When the clock starts, Foster is all about maintaining a steady pace. "You gotta have rhythm," he noted. "Aside from the heat level, it's about speed consumption." He usually attempts to eat one pepper every three seconds. "There are a few other tricks of the trade but I won't divulge them. Nothing illegal." he said with a laugh.

Coping with the fiery pain after competition can't be overlooked. Foster will eat dairy to immediately sooth the burn but noted that milk can only help so much when it comes to the Carolina Reaper. The active ingredient capsaicin is oil-based, so it won't dissolve with water, beer or even milk.

Dairy — specifically the casein protein — will temporarily block the receptors in the mouth that detect heat, Foster said. But the fiery oil will still linger in your mouth even after you've swished with milk, he said.

"The best remedy is acidic," Foster said. "It doesn't quench, but it relieves." He likes to drink lime juice after close encounters with the Carolina Reaper.

The competition heats up

Cheers and jeers reverberated around the Brooklyn Expo Center as Foster strode confidently onto the stage holding a half-eaten stick of butter and wearing a pair of black latex gloves. Foster hadn't disclosed that butter was one of his strategies in the pre-competition interview but the greasy fat undoubtedly helped coat his mouth and lips and protect them from the fiery chili oil.

Foster was the last person to go in the Reaper eating competition. Nine people — five women and four men, including Wayne Algenio — had already endured the world's hottest pepper in front of the roaring crowd. A Guinness World Record judge presided as each contestant ate as many peppers as possible in 60 seconds, stood on stage and tolerated the heat for an additional 60 seconds and then grabbed a milk or whipped cream from a table on stage and dashed off to a back room supplied with large trash cans and more milk and ice cream. The 60 seconds of pain portion was grossly entertaining: Contestants drooled, closed their eyes in pain or paced around the stage.

The MC hadn't announced Algenio's score so the audience — and Foster — didn't know whether Algenio had eaten enough Reapers to achieve a new Guinness record. Without knowing whether or not he had to defend his record of 120 grams, Foster stooped over the table, ready for action. With 60 seconds running on the clock, he began methodically popping the peppers into his mouth one at a time, chewing once and then swallowing the fiery mass.

But it was easy to tell something was off. Foster wasn't hitting his pace of one pepper per three seconds, and he seemed to have trouble with one of the first peppers — at one point he tilted his head back when swallowing, as if he were throwing back a shot of tequila. There was no consistent rhythm. The clock ran out for the eating portion, then the 60 seconds of heat tolerance were up. Foster grabbed a can of whipped cream, playfully squirted some at the audience and also in his mouth, and then dashed off to the back room.

Algenio had won the competition, an emcee informed the audience. But since Algenio consumed just 94 grams of Carolina Reaper, he hadn't bested Foster's Guinness record.

"I knew it from the first pepper," Foster said. "Today wasn't my day and I'm okay with it," he said. "I don't care about the contest, I care about the record."

Even though he didn't win, he was a winner in one respect: "I'm not in nearly as much pain as when I broke the record ..." A silver lining to the whole ordeal, perhaps.