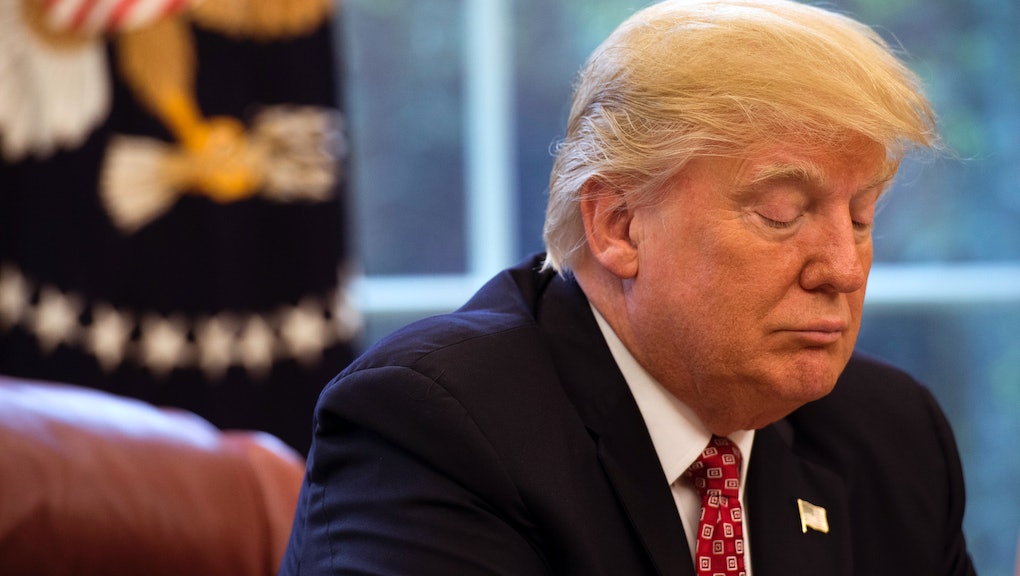 The 2016 campaign cycle might be best remembered for the intensity with which misogyny was unleashed into the national political discourse. President Donald Trump's shameful views on women arose throughout the campaign. Just look at the things he called women: "fat pigs," "dogs," "slobs" and "disgusting animals." He hurled sexist insults and slurs at female journalists like Megyn Kelly and Katy Tur. He was accused of walking in on teens changing at pageants and was caught on tape bragging that he grabs women's genitals at will. He called his opponent Hillary Clinton a "nasty woman" and suggested her gender made her unfit for the presidency. To top it off, nearly a dozen women accused him of sexual assault, allegations he denied by calling some of the women too ugly to assault.

After he won, these attitudes toward women manifested as policy when Trump announced two major elements of his platform: defunding Planned Parenthood and overturning Roe v. Wade.

It was this promise — to limit women's ability to control their bodies and lives — that, in part, won him the presidency.

As we approach Trump's 100-day mark in the Oval Office, he hasn't fully realized his vision for scaling back women's rights. In fact, his first 100 days have been disastrously ineffective. Trump's cut backs to reproductives rights, too, likely could've been worse considering the anti-abortion legislation sweeping the country on the state-level. Still, what he did pass will have long-lasting, detrimental impacts on women.

Here's what he's done so far:

1. He reinstated the global gag rule.

One of Trump's first orders of business as president was to reinstate the global gag rule, a policy that forbids the U.S. from giving federal funds to to any foreign organization that provides or endorses abortion.

This photo tells you everything you need to know about where women fit into this calculus:

The global gag rule has disastrous consequences for women around the world, 21.6 million of whom receive unsafe abortions every year.

2. He proposed a budget that would eliminate 25 violence against women grant programs

The day before Trump's inauguration, his administration proposed a "skinny" budget blueprint that made some of its deepest cuts to programs that benefited women.

In the past, the programs have shored up initiatives to investigate gender bias in policing, prohibit domestic abusers from obtaining firearms and prevent campus sexual assault.

3. He put his daughter in charge of women's rights initiatives

Now with her own office and in an official role, Ivanka has made her own promises to women, specifically to working women and mothers. Though there is some evidence to suggest Ivanka wants to understand women's concerns about her father — particularly regarding his stance on Planned Parenthood and abortion rights in general — it's all been for naught, considering all of the other things on this list.

But Ivanka isn't just to blame for her complicity in her father's agenda; she's proven herself to be hypocritical in her own right, denying her employees maternity leave and paying them meager wages.

4. Trump championed health care legislation that would have nixed many women's health benefits.

The GOP had always planned to take down the Affordable Care Act and Planned Parenthood in one fell swoop.

Republican legislators demonstrated their commitment to making that a reality when they proposed a health care bill that would withhold Medicaid funds — which, along with Title X, make up the majority of Planned Parenthood's federal funding — from the clinics for one year.

According to the Congressional Budget Office's report, the legislation, had it been passed, would have blocked 15% of Planned Parenthood's Medicaid patients from birth control and abortion access, resulting in "several thousands" of women having unintended births.

5. He appointed Neil Gorsuch to the Supreme Court.

In what is perhaps the biggest blow to women's rights, Trump announced he'd selected Gorsuch, a textualist conservative, as his Supreme Court nominee.

While Gorsuch made no promises about how he'd vote should there be an opportunity to overturn Roe v. Wade, calling it the "law of the land" in March. When South Carolina Sen. Lindsay Graham asked Gorsuch if the Trump administration asked him to rule on the landmark abortion rights case one way or another, he said no, adding, "Senator, I would've walked out the door."

But that doesn't mean Gorsuch doesn't pose a threat to women in the U.S.

Gorsuch has ruled against Planned Parenthood before and even gone to unorthodox measures to give them a hard time in court. Gorsuch also sided with Hobby Lobby in the Supreme Court case that determined employers don't have to insure employees' birth control and contraceptives under the ACA if it goes against their religious beliefs.

"For some, religion provides an essential source of guidance both about what constitutes wrongful conduct and the degree to which those who assist others in committing wrongful conduct themselves bear moral culpability," Gorsuch wrote at the time.

6. He halted the United States' contributions to the U.N.'s maternal health fund

Earlier this month, Trump's administration announced the U.S. would no longer make contributions to the United Nations Population Fund, known as UNFPA, because of its stance on abortion.

In a letter for UNFPA, the state department explained the U.S. was ending its relationship with the fund — which gives money to over 155 countries for family planning, maternal care and children's health —  because it allegedly "supports, or participates in the management of, a program of coercive abortion or involuntary sterilization."

UNFPA officials said their fund supports no such thing, saying Trump's decision to pull out of the fund was based on an "erroneous claim":

The United States, one of our founding members, has long partnered with UNFPA to protect and promote the reproductive health and rights of women and girls, thereby fostering healthier women and girls and their families. The support we received over the years from the government and people of the United States has saved tens of thousands of mothers from preventable deaths and disabilities, and especially now in the rapidly developing global humanitarian crises.

7. He gave states the OK to withhold Title X funds from abortion providers.

As part of his grand plan to defund Planned Parenthood — and one day, maybe, overturn Roe v. Wade — Trump approved a measure that gives states the right to deny Title X funds to abortion clinics.

Title X funds go toward services like birth control, STI testing, well-woman exams and cancer screenings, not abortion. The Hyde Amendment, which has been around since 1973, explicitly bans any federal funds from going toward abortion services.

Planned Parenthood came out with a strong statement against Trump's decision, emphasizing that his policy would impact the four million patients who rely on Title X funds, the overwhelming majority of whom come from low-income backgrounds.

8. He revoked protections to women in the workplace.

"Arbitrations are private proceedings with secret filings and private attorneys, and they often help hide sexual harassment claims," Maya Raghu, Director of Workplace Equality at the National Women's Law Center, told NBC News. "It can silence victims. They may feel afraid of coming forward because they might think they are the only one, or fear retaliation."

Coincidentally, earlier this month, Trump also came to the defense of Fox News host Bill O'Reilly, who faced multiple complaints of sexual harassment, settling five of them outside of court.

9. He made plans to strip funds to the Office of Global Women's Issues.

The day after he commended Ivanka for her supposed dedication to women's empowerment, news broke that Trump planned to cut all funding to the Office of Global Women's Issues, a State Department bureau.

According to the office's site, the bureau, which has been around since 1995, spearheads initiatives to "include women and girls in U.S. diplomacy, partnerships and programs."

Oxfam America, a nonprofit fighting global poverty, slammed Trump on the decision, warning cutting the bureau's funds would have "dire consequences for millions of people, as well as our global standing."

"It's clear that women's empowerment and gender equality are on the chopping block in this budget," Paul O'Brien, Oxfam vice president for policy, said.

What is perhaps most chilling is the culture Trump has brought into the American political consciousness: that it's acceptable to be terrible to women and still become president.

It's this accomplishment, unlikely to be included on any "100 days" roundup, that has succeeded in instilling fear in women across the country and around the world and will prove to be Trump's most lasting legacy.

That legacy, however, will always be colored by women's resistance to it. The day after Trump's inauguration, millions of women took to the streets to protest his presidency in the Women's March. On March 8, many of these same women went on strike, walking off their jobs and to marches and rallies. And across the board, it's women who are leading the resistance against Trump.

Women will not go gentle into Trump's good night — and he'll have to reckon with that for the rest of his presidency.