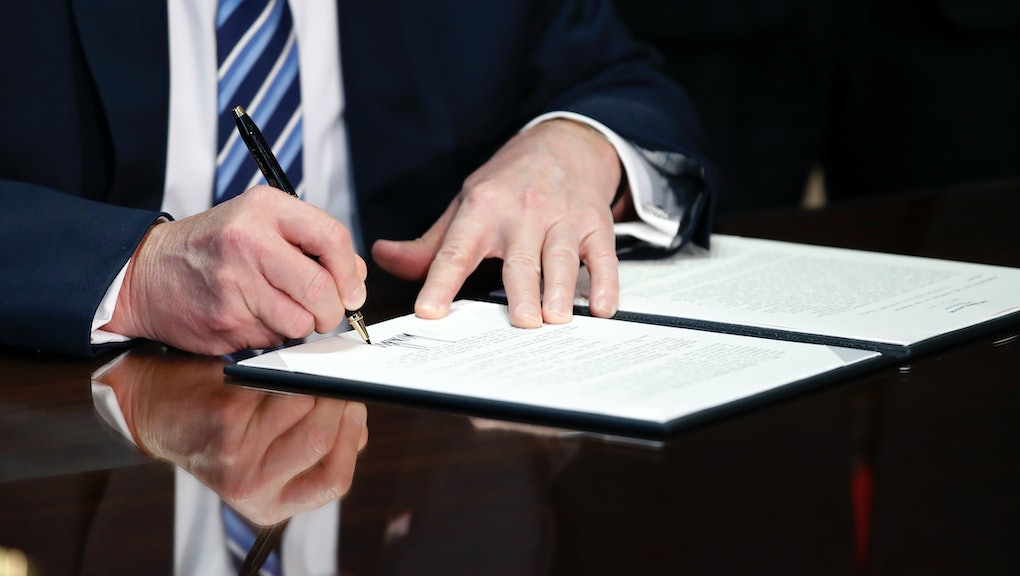 Trump once mocked Obama's executive orders. Now he's citing his own as proof of hard work.

Back in 2012, then-private citizen Donald Trump bashed President Barack Obama for signing too many executive orders. "Why is @BarackObama constantly issuing executive orders that are major power grabs of authority?" Trump asked on Twitter.

Trump and top Republicans frequently unloaded on Obama's executive orders signing as evidence that he was ruling by fiat — acting more like a king than a president.

But now that Trump's 100th day as the man at the Resolute Desk is approaching, signing executive orders has transformed from an abuse to an accomplishment, according to his top spokesman.

Pressed at Monday's daily media briefing about what the new president has gotten done in the opening stretch of his tenure, White House press secretary Sean Spicer defended Trump in part by pointing to the number of orders he's signed.

"I think when you look at the number of pieces of legislation, the executive orders, business confidence, the U.S.'s role in the world, there's a lot of accomplishments that have occurred, and we feel very good about what we've done as we head up to this first 100 days," Spicer said.

At the same time, Spicer sought to downplay the significance of the 100th day milestone, which has seen Trump struggle to deliver on bedrock campaign promises such as repealing former President Barack Obama's Affordable Care Act and restricting travel to the U.S. from a set of majority-Muslim countries.

Despite his previous disdain for executive orders as a mechanism for governance, putting his pen to more of them is apparently just what Trump plans to do in the walkup to the 100-day marker.