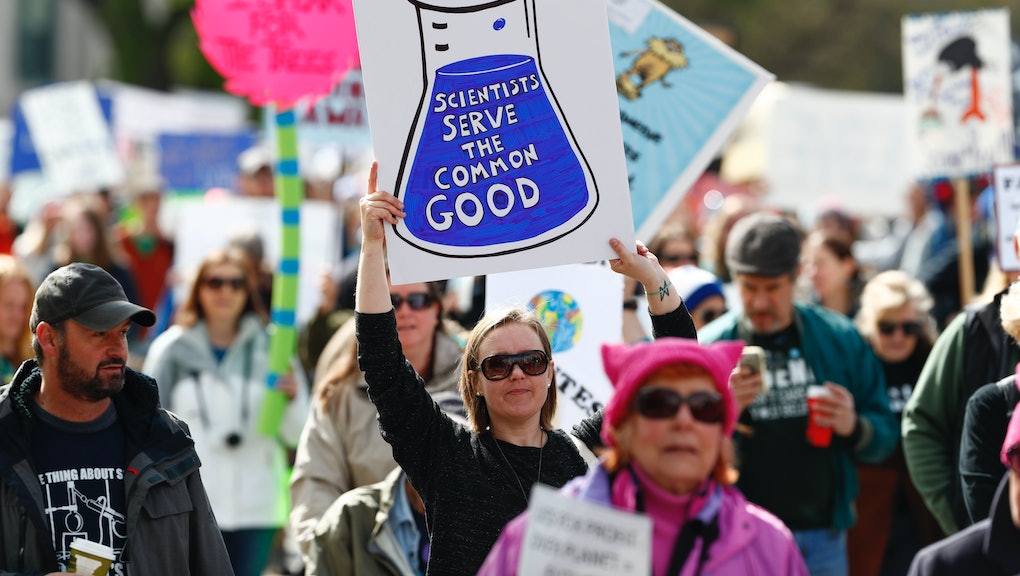 The March for Science gathered protesters in over 600 marches around the world on Saturday and there was an abundance of witty poster signs praising science and denouncing the Trump administration.

In Washington, D.C., one poster stood out. A Sikh man, wearing a turban, was pictured holding a sign that read "Are your nervous to see me on your flight?" on one side. On the other, it dropped a massive truth bomb: "Worry not, the software I wrote for the plane is bug free — software engineer Boeing 747-400, 777, 767, 400. Gooo Science!"

Twitter user Sasha Aickin tweeted the man's poster, and it garnered more than 38,000 retweets and 79,000 likes.

The poster is a bold condemnation of institutionalized Islamophobia and xenophobia. It calls out the faulty logic in associating Muslims, Sikhs or people of color with terrorism by pointing out the contributions of immigrant communities to several industries including aerodynamics.

Like Muslims, Sikhs are also all too familiar with racial profiling at airports and discrimination on airplanes since 9/11. For example, in November 2008, three prominent Sikh musicians were kicked off a US Airways plane after a pilot refused to fly with them. Another prominent case took place in February when Sikh model Waris Ahluwalia was blocked for boarding his Aeromexico flight because he refused to remove his turban — sacred to his religious identity.

But outside of airplanes, Trump's inflammatory rhetoric about about Muslims, immigrants and refugees has been tied to a severe uptick of of anti-Muslim discrimination and hate crimes and Sikhs, unfortunately, have always been caught in the crossfire. In early March, a white man shouted "go back to your country" before shooting a Sikh man in his drive way in Kent, Washington. On April 16, a male passenger in New York City reportedly physically assaulted a Sikh cab driver and ripped off his turban.

This Sikh software engineer's poster serves as an important reminder of the contributions immigrants and people of color make to American society — and all it took was a marker and some paper.