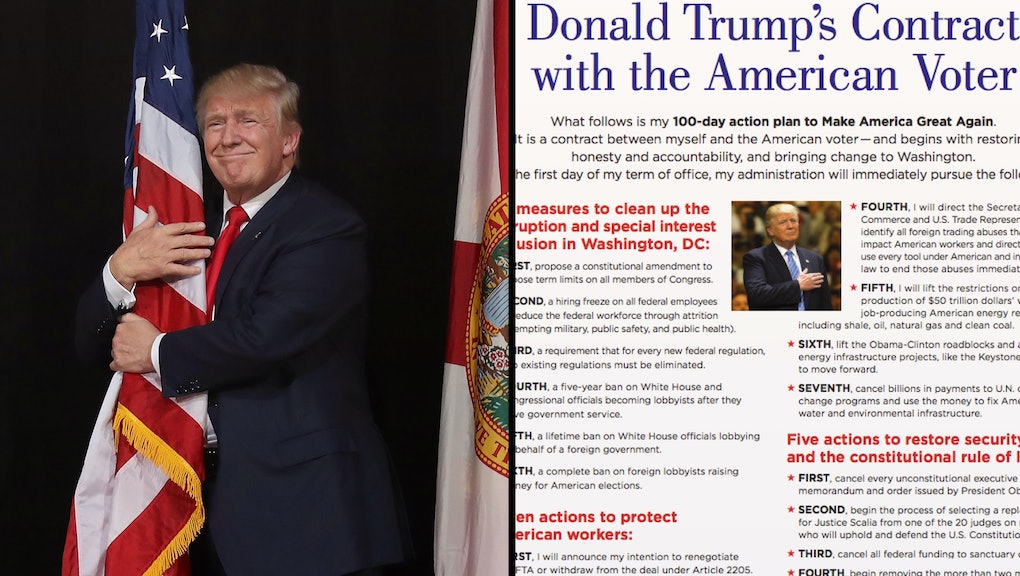 President Donald Trump set some lofty goals for the first 100 days of his presidency when he drafted his "Contract with the American Voter," a policy blueprint he released during the campaign that introduced 10 major bills, with a promise to "fight for their passage" before that 100-day deadline expired.

But so far, only one of those pieces of legislation has seen the light of day: a bill Trump said would "repeal and replace Obamacare."

And that bill, formally titled the American Health Care Act, failed spectacularly before it even got to a vote in the House due to Republican revulsion with the bill's specifics.

As for the nine other bills detailed in Trump's contract? Crickets.

Here are the 10 bills Trump said he'd introduce and fight to pass within his first 100 days in office:

Repealing former President Barack Obama's signature health care law, and replacing it with "something terrific" was one of Trump's most steadfast promises on the campaign trail.

Yet now that the GOP controls both chambers of Congress and the White House, they haven't taken one vote to make good on their promise to "repeal and replace" the law.

While Republican House leadership introduced the American Health Care Act in March, the bill crashed and burned just a few weeks later, after Republicans of all stripes came out publicly against the proposal.

Republicans are still working on a plan to make good on their promise, but they don't appear to be any closer to a bill that can make it through Congress.

Throughout the campaign, Trump promised to reform the entire tax code — a lofty goal given the fact Congress hasn't passed a major tax reform bill since 1986, according to CNN.

According to Trump's contract, his tax reform bill would, "grow the economy 4% per year and create at least 25 million new jobs through massive tax reduction and simplification."

Trump released a blueprint Wednesday that laid out his ideas — but did not provide many specifics.

This theoretical bill would impose tariffs "to discourage companies from laying off their workers in order to relocate in other countries and ship their products back to the U.S. tax-free."

No such bill has been introduced, though Trump has taken some less drastic measures, including signing a presidential memorandum to investigate the national security impact of steel imports.

One of the aspects that made Trump a unique GOP presidential candidate was his promise to pass a $1 trillion infrastructure package to fix the country's aging roads, bridges, tunnels and water systems.

Trump promised to introduce a bill that would end Common Core standards and re-allocate funds to "give parents the right to send their kid to the public, private, charter, magnet, religious or home school of their choice."

The proposal also made a vague promise to make "two- and four-year college more affordable."

While he successfully nominated school choice advocate Betsy DeVos to head the Department of Education, he has not introduced a bill that attempts to make good on any of those promises.

Trump promised to help make caring for children and elderly family members easier by allowing Americans to deduct the cost of that care from their taxes.

He also said the bill would seek to incentivize employers to give their employees on-site childcare at the workplace, as well as create "tax-free dependent care savings accounts for both young and elderly dependents, with matching contributions for low-income families."

That bill has not been introduced, and little talk of that plan has taken place publicly.

Trump promised to "fully fund" the wall between the U.S.-Mexico border. He also promised Mexico would reimburse the U.S. for the cost of that wall.

On top of that, this legislation would increase federal prison sentences for undocumented immigrants who attempt to re-enter the U.S. illegally after a previous deportation.

A few days before his 100 days expire, however, Trump is already signaling that he'll push the timeline for funding the wall to the fall. And it appears unlikely that Mexico will ever pay for the cost, estimated in the tens of billions.

Trump said this would be a bill to help reduce "surging crime" by "increasing funding for programs that train and assist local police."

He also said it would increase funding to "federal law enforcement agencies and federal prosecutors to dismantle criminal gangs and put violent offenders behind bars."

Trump did sign an executive order that would seek to penalize so-called "sanctuary cities" by pulling resources to municipalities that don't detain undocumented immigrants in state and local facilities simply because they are undocumented. But that order was blocked by a San Francisco judge and there has been no legislative action on this promise.

This lofty promise was to eliminate the defense sequester, which creates a hard cap on how much money can be spent in certain categories, including defense spending.

This bill would supposedly privatize veterans' health care by giving them vouchers to use at doctors of their choice. It would also protect the U.S. from future cyber attacks and create "new screening procedures for immigration to ensure those who are admitted to our country support our people and our values."

Trump has not made good on any of these promises.

10. Clean Up Corruption in Washington Act

The final piece of legislation Trump promised was one that would create "new ethics reforms to drain the swamp and reduce the corrupting influence of special interests on our politics."

Trump hasn't introduced any legislation that would do this.

He did sign an executive order that imposed a lobby ban that would prevent White House officials from lobbying in an area that related to their past job in the executive branch. But experts say the order actually weakened ethics rules Obama had in place.

And some White House officials have already received waivers from complying with the ban, weakening its intent.