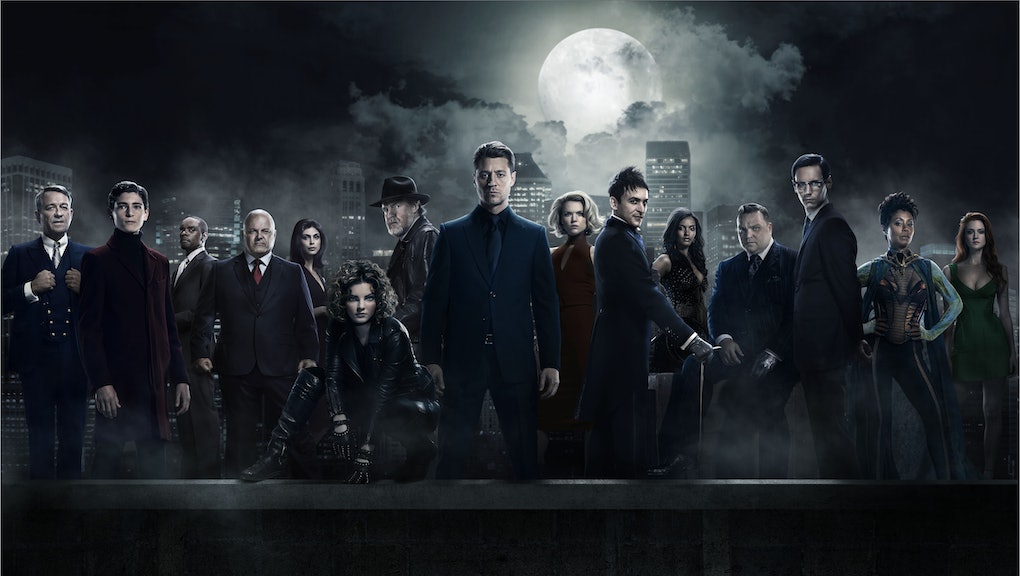 'Gotham' season 3, episode 15 reveals how the Riddler got his name

It has been two months since the winter finale of Gotham, but the Batman-prequel series is now back, and it appears that the rest of season three will lay the groundwork for Bruce Wayne finally becoming the Caped Crusader. The focus of episode 15, however, was not Bruce becoming Batman, but Edward Nygma becoming the Riddler.

[Editor's Note: Spoiler's ahead for season three, episode 15 of Gotham.]

Gotham's winter finale ended with quite a few cliffhangers. Bruce's relationship with Selena seemed all but over, Jim Gordon was approached by his long-lost uncle (a member of the Court of Owls) and, most importantly, Ed shot Penguin and dumped his body into the river. And from the beginning of the spring premiere, it was clear that Ed was not coping well with the loss of his friend — even if he was responsible.

Before Ed shot Penguin, the latter warned him that he would not know who he was without him. And it appears that this is true. It has been weeks since Ed shot Penguin and he has had some trouble replacing his friend. So, Ed has been seeking out intellectual and creative-minded people to fill the void. Unfortunately, he cannot find anyone who can answer his riddles — this logically means he has to kill them.

Ed is so desperate for a teacher, mentor or just a friend, that he has been taking hallucinogenics so that he can have conversations with Penguin, or a version of himself who appears as Penguin. And during one of these conversations with himself, Ed realizes that he doesn't need a teacher, but rather, like any good villain, he needs an enemy. So, he devises an elaborate plan to test Jim Gordon's value as an enemy. But with Gordon on vacation, Lucius Fox ends up being pulled into the game.

Ed's first riddle sends Fox and the rest of the Gotham City Police Department to a local chess tournament, where they are too late to prevent the non-deadly electrocution of some of the players. But Fox is able to figure out a phone number from the various chess pieces and is eventually given his second riddle in a conversation with Ed, whose identity is not yet known. Fox then realizes that the next victim will be Detective Bullock, when he finds his badge inside the stomach of a dead pawnshop owner (yea, gross).

Fox eventually comes face-to-face with Ed, who has Bullock tied to a chair at the top of a staircase. And the game is simple: If Fox can answer one of three riddles correctly, Bullock lives. If not, well, splat. Fox ends up getting the last riddle correct, but is unable to stop Ed from fleeing the scene. Ed later confronts Fox in his car and thanks him for helping him learn who he truly is: The Riddler.

After reconciling briefly in the winter finale, Jim and his uncle, Frank, go on a little retreat to reconnect. Unbeknown to Jim, though, his uncle is a member of the Court of Owls, and it appears the mysterious organization is looking for the young Gordon to join its ranks. And though it initially appears that Frank's loyalties lie with the Court, it may not be so simple.

Frank tells Jim that he is a member of the Court of Owls, but does not try and make the organization seem like they are in the right. Rather, Frank explains that they have become corrupt and that they need to be stopped. He also tells Jim that he realized this too late — after the Court had already killed Jim's father. Jim obviously does not take this news well, considering for 20 years he thought his dad died in an accident — not that he was murdered.

It is not entirely clear whether Frank actually wants to take down the Court, or if he is using that ruse as a way to get Jim into their ranks. But before going back to the Court to update them on his progress recruiting Jim, he leaves his nephew a picture of his father, with a note reading, "Help me honor his memory."

We'll have to keep watching to figure out exactly what the Court wants with Jim, and whether his uncle can be trusted.

Where is Bruce Wayne?

The Court of Owls was pretty busy in the spring premiere. In addition to trying to recruit Jim Gordon to its ranks, they move forward with a plan to replace Bruce with the clone that first appeared at the end of season two. Now, the fake Bruce talks, walks and dresses like a Wayne. And not only that, it appears he has been studying, because he is familiar with the entire Wayne history as well.

Having the Bruce Wayne clone act like Bruce Wayne was the hard part — having him replace the young billionaire was a piece of cake. The real Bruce receives a letter from Selena asking that they meet. Despite being initially apprehensive — since Selena had been avoiding him for weeks — he decides to go meet her. When he does confront her, though, it appears that she was not the one who left the note.

After Selena leaves, her fellow thieves try to beat up Bruce, but Alfred's training has paid off — he kicks their asses pretty easily. But not long after, he is jumped by the fake Bruce, who knocks him out with a powerful sedative. And with the fake Bruce now living at Wayne Manor with Alfred, that leaves us with a major question: Where is the real Bruce?

Episode 15 ends with the real Bruce waking up in a prison in the snowy mountains, which likely will set up his first encounter with Ra's al Ghul, who will be played by Game of Thrones' Alexander Siddig.

Gotham returned with a solid, yet unremarkable, episode. Still, it was fun seeing Ed descend into madness, and with him now assuming the Riddler persona, it is exciting to see the series move closer to a Gotham with Batman and his various enemies. What the spring premiere excelled at was setting up some enticing storylines going forward.

The Court of Owls is an interesting villainous organization, so their larger inclusion in the series should make for some compelling drama. It will also be mighty interesting to see how long it takes Alfred, or anyone else, to realize that something is fishy with Bruce.

Of course, the most interesting thing, for me at least, is seeing what will happen with the real Bruce. And I certainly cannot wait for Ra's al Ghul to finally show up. It looks like Gotham may be following a Batman Begins-like blueprint, with Bruce studying under Ra's. And while that storyline may not be the most original, sometimes it is better not to mess with the classics.

Finally, not surprisingly, we learn toward the end of the episode that Penguin is alive, thanks to Poison Ivy, who has been nursing him back to health. Now, we will have to see if the pair form some type of an alliance, and what Penguin will do to Ed when he finally catches up with him. We likely won't have to wait long to find out.