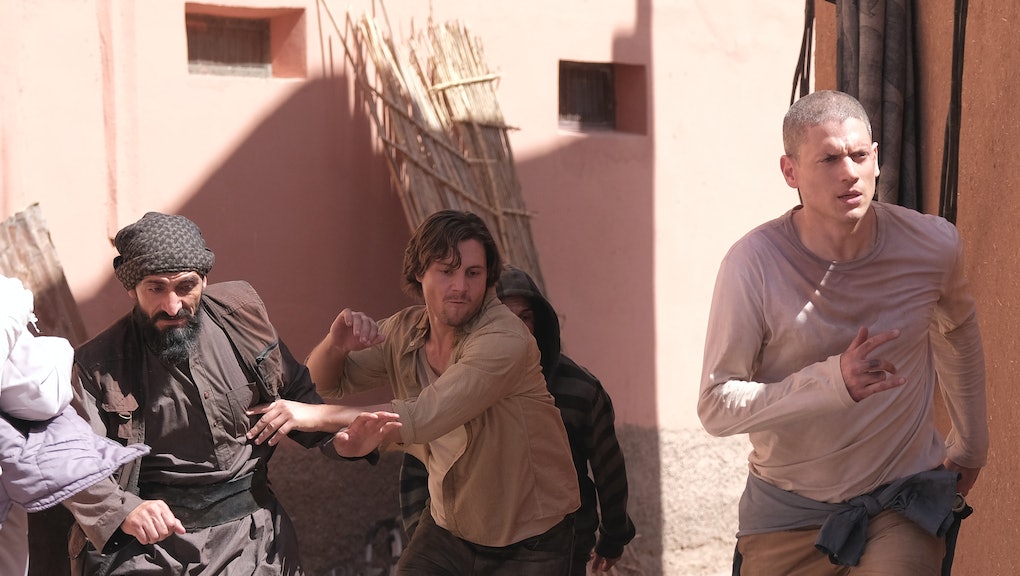 Episode 4 in Prison Break's revival was by far the most satisfying and resolute. Two crucial characters die, Michael breaks out of Ogygia and we learn — to some extent — who Poseidon is. By the end, the show's mysterious string-pullers all have a face, and we have a good sense of who the good guys are and who the bad guys are.

There was some doubt about the intentions of Michael Kellerman, for instance. In episode 3, Sarah wrongly attributes her phone's hacking to Kellerman, remembering he had access to her fingerprint off a water glass she drank from during their meeting. Positive that Kellerman is once again acting as a hired gun, she enlists Bagwell (of all people) to get answers by any means necessary. Bagwell agrees to help since he's also eager to learn why Michael paid for his robo-hand.

Poseidon, we learn from Kellerman, is the pseudonym for an ideologically driven member (or members) of the intelligence community who engage in subterfuge to pursue their own ends overseas, by swaying an election, for instance. Kellerman theorizes that Poseidon wants Ramal broken out of prison, a theory that jibes with what we've learned on Michael's side.

Kellerman explains that Poseidon is so deeply embedded, you couldn't find him with a nuclear submarine, hence the name. We don't know whether it's a single person or not, but we know from the two assassins who take out Kellerman in the middle of his explanation that Poseidon doesn't act alone.

We do get a quick clue: At one point in the episode, an anonymous and important-looking government official takes a phone call and then walks out into a lobby of a government-looking building. The assassins from the previous episodes appear to be waiting there, but that's all we get. That said, it seems clear at this point that at the very least whoever the bad guy is, he's plugged in.

It also seems like we're supposed to see Kellerman as a martyr. "I was once you, killing for a lie," he says to the operative, before expiring. If you'd watched Kellerman go from being a ruthless killer, to one of the moral centers of the show, to seeing the possibility of him having been corrupted again — it's a relief.

The fact that the information Kellerman shared got him killed also suggests we can trust it. By now that gives us a good rubric for good guys and bad guys: Are they from the previous series? Kellerman has died for the cause. Bagwell is now helping Sarah and with a heavy dose of irony — "there's a time for everything!" — is the one who ends up calling the police, which scare the assassins away. Unfortunately they seem to come too late to save Kellerman.

Back in Yemen, Michael successfully breaks out of Ogiya with former cell mates, Ja (the surprisingly sophisticated South Korean drug dealer), Whip (a Sucre-like figure which, by the way begs the question, where they hell is Sucre?), and Ramal. As expected, ISIS has continued advancing on the prison and eventually the guards flee.

Luckily for Michael and his compatriots, when disorder descends on the prison, a pugnacious Christian fundamentalist is the one who seizes on the chaos and takes control. That prompts Ramal to help Michael instead of waiting for ISIS and his friends in the prison to take over.

"You're going to be our insurance," Michael says, demanding Ramal's help — and the help of ISIS — in getting out of the country. "Or would you rather be their insurance?" Michael says, pointing to the angry crowd.

It's a pretty good, dramatic scene even if the writers don't do a great job of explaining why, exactly, the cells are so easy to break out of if the two prisoners can just find a way to overcome their differences and work together. Ramal's got an exposed bar in his cell which he uses to free Michael, who frees the rest of them — but if breaking out of the prison was so easy, then why wouldn't other prisoners have figured this out already? Michael's kind of a big deal when it comes to breaking out of prisons, if you haven't heard. Why would it have been worth it to send him here?

Eventually the group gets out but is soon confronted by ISIS soldiers and everyone predictably betrays one another. In the middle of a stand-off, Lincoln shows up at the nick of time and seizes one of ISIS's mounted guns, which gives our guys the leverage they need to off Ramal and escape. There's a warm scene where Michael and Lincoln hug, Michael even cries. At the episode's conclusion, we learn from a conveniently-placed TV that ISIS has declared war on the Ogiya four, making their escape from the country overall that much more dangerous.

Knowing Michael, though, he'll probably figure it all out.