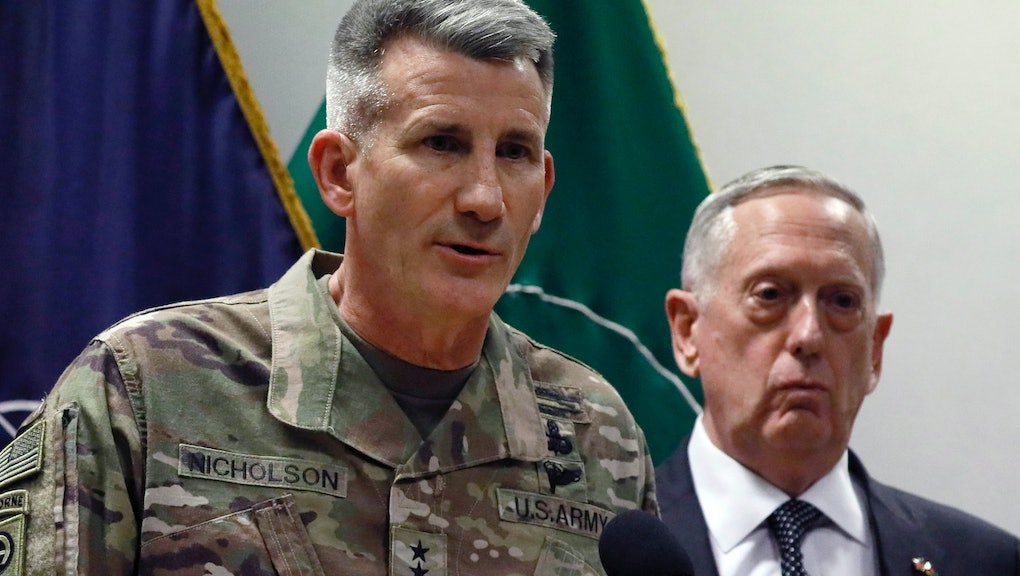 Is Russia arming the Taliban? Here's what we know about the US general's claims.

Gen. John Nicholson, the United States' top general in Afghanistan, seemed to allege on Monday that Russia is arming the Taliban — an assertion the Russian foreign minister denies.

Nicholson's comments came a few days after Taliban militants disguised as Afghan security forces staged an attack on a security base near the northern city of Mazar-e Sharif, reportedly killing upward of 140 Afghans and wounding 60 others .

"We continue to get reports of this assistance," Nicholson told reporters. "We support anyone who wants to help us advance the reconciliation process, but anyone who arms belligerents who perpetuate attacks like the one we saw two days ago in Mazar-e Sharif is not the best way forward to a peaceful reconciliation."

Russia has increased its flow of weapons — including medium and heavy machine guns — to the Taliban, supposedly to aid them in their fight against the Islamic State in the eastern part of Afghanistan, a senior U.S. official told the Washington Post. But, the official said, the weapons have been turning up in the southern part of the country, where the Islamic State has limited presence.

In his remarks to reporters, Defense Secretary Jim Mattis implied that Russia was in violation of international law by apparently arming Taliban militants, who also on Monday killed eight Afghan policemen in the northern district of Darqad.

"Any weapons being funneled here from a foreign country would be a violation of international law unless they were coming to the government of Afghanistan," Mattis said.

But Russia on Tuesday denied it was providing weapons to the Taliban, with Russian Foreign Minister Sergei Lavrov saying the U.S. claims were unsubstantiated.