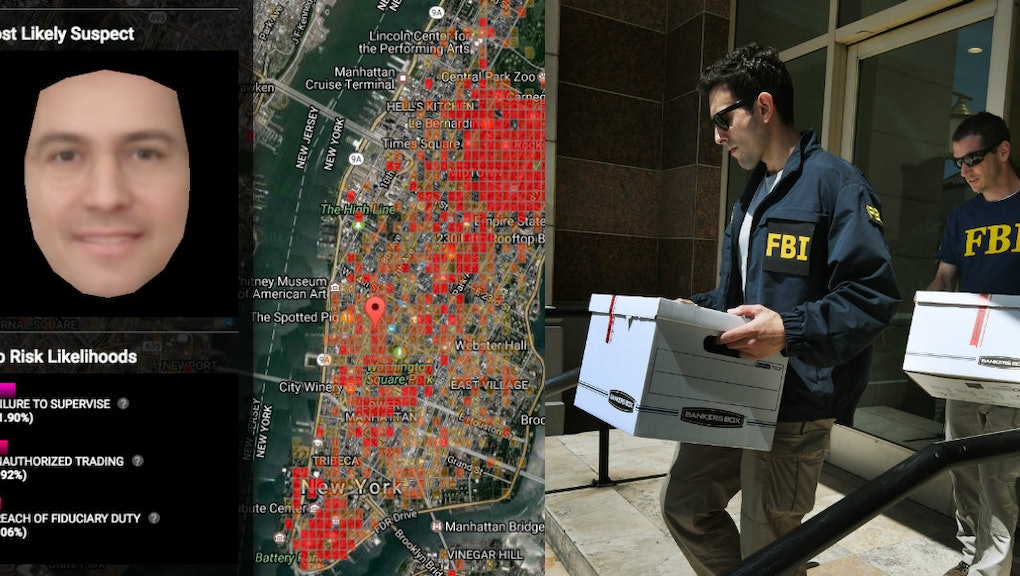 This app exposes the white-collar criminals all around you

Looking through the glossy lens of the New York Police Department's crime tracking data, compiled in Compstat 2.0, you'd think that the denizens of Wall Street were model citizens. Sure, there are a few scuffles in the past month, some petty pilfering at the corner stores. But no sweeping fraud, no tax evasion, no market manipulation, insider trading, counterfeiting or employment discrimination.

To see the real criminality on Wall Street, you have to look through another lens entirely.

A new app and website called White Collar Crime Risk Zones, which goes by the initials WCCRZ, shows exactly what neighborhoods are chock full of financial criminals, how much damage they're doing and even what they might look like. Using data from the Financial Industry Regulatory Authority, a team of technologists affiliated with the left-wing magazine New Inquiry created the open-source tool so that anyone can put a face on the labyrinthian world of white collar crime hidden in their own home town.

The app was created in the image of so-called "predictive policing" apps — the new spectrum of apps and tools used by police to map out where crime is likely to occur so that police chiefs know what neighborhoods to patrol. Because these systems are informed by historical data about where police are already sensing crime and arresting offenders, any biases in police behavior, including racial biases, are affirmed and amplified by these crime-predicting algorithms.

"The truth is that all of those systems use biased data sets and reinforce precisely the biases that they emerge from," Sam Lavigne, a technologist and the New Inquiry's special projects editor who helped develop WCCRZ, said in a phone interview on Tuesday. "And that the police departments making use of those systems work behind a veil of objectivity."

So the WCCRZ team, which included Lavigne, the New Inquiry publisher Francis Tseng and data scientist Brian Clifton, built out a "Most Likely Suspect" feature, scraping the LinkedIn profiles of top executives in that area to come up with a facial average. The app slaps a new face on crime: a thousand algorithmically generated, grinning white fraudsters.

It may not be the face of crime trotted out on the evening news, but that's the point. The app reframes the common cultural code for criminality — typically black, poor and uneducated — around corporations and neighborhoods that more accurately reflect where crime happens and who's committing it.

Many apps have done more harm than good when it comes to crime and poverty. Silicon Valley-style founders have spilled thousands of lines of code creating apps that warn users of the shady neighborhoods in their cities — apps like SketchFactor, which came under fire for dressing up racial paranoia behind a sleek user interface.

So WCCRZ notices when users enter one of these shady financial districts and sends a push notification, telling them to be on high alert for financial crime. White collar crime may not strike from a dark alley — as the urban paradigm teaches people to expect from criminal neighborhoods — but the notification serves as a reminder that broken windows aren't the only way of knowing that criminal activity is afoot.