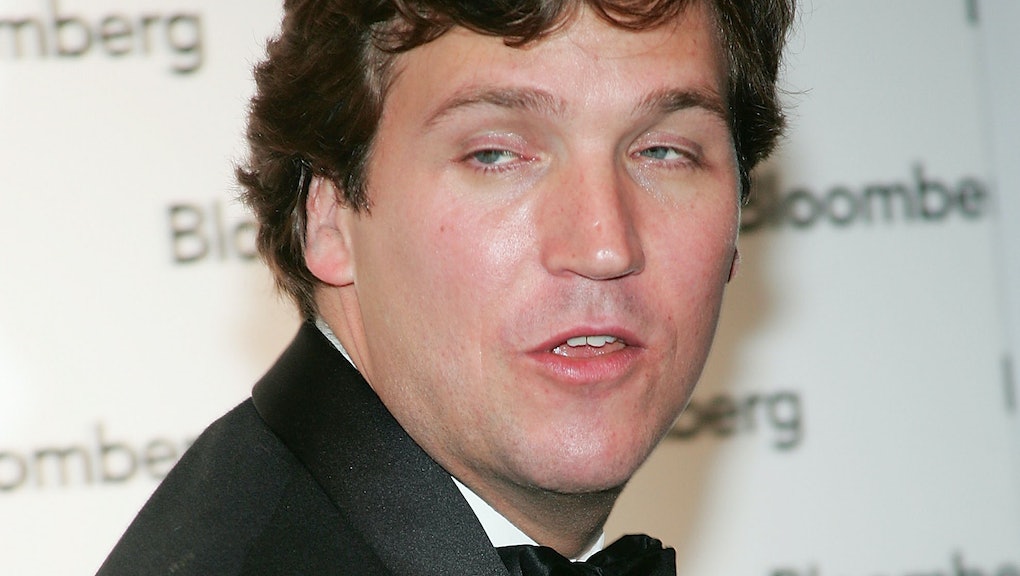 Tucker Carlson has written a book. Apparently publishers are so confident that people will want to read it, they've launched a bidding war that will net the Fox News pundit "millions of dollars."

This shouldn't be a surprise, exactly. After all, Bill O'Reilly has long had a lucrative publishing career, and Carlson — who just took over his primetime spot — got his start as a magazine writer with pretty solid chops.

But Carlson being so in-demand in 2017 still comes as something of a curiosity. Carlson has not only engaged in the kind of cartoonish misogyny, gay-bashing and racism that his network has come to be known for, and been just flat wrong on a great many things — he's also been famously called out for his hackery to his face on two separate occasions.

The first time came in 2004, when Jon Stewart appeared on CNN's Crossfire to tell hosts Carlson and Paul Begala that they "fail miserably" in their responsibility to the public discourse and that their "political theater" was "hurting America."

"I do think you're more fun on your show," Carlson told the former Daily Show host.

"You know what's interesting, though?" Stewart replied. "You're as big a dick on your show as you are on any show."

Crossfire was cut within months, with network brass citing Stewart's criticisms as part of the reason for the cancellation, and Carlson was set on the path that would eventually bring him to Fox News.

The second time Carlson was owned on his own show came last December, when the host relentlessly attempted to lure Teen Vogue writer Lauren Duca into a fight over Ivanka Trump being harassed on an airplane during Donald Trump's transition to the White House.

"You're shouting over me every time I speak, it's incredibly unprofessional." Duca says. "You're actually being a partisan hack who is attacking me and not even allowing me to speak."

Still, Carlson has been able to rise at Fox, taking over for O'Reilly on the network's 8 p.m. bigotry bonanza and now, according to his agent, potentially scoring one of the biggest book deals of any pundit in recent history.

"Tucker's is easily the most sought-after book by a news personality in many years, and he's on track to get one of the biggest and certainly most well deserved deals in recent history," Matt Latimer, a partner at Javelin representing Carlson, told Buzzfeed.

It's not clear what the book is about, other than that it "reflects on themes Carlson cares about," according to a publishing source who spoke with Buzzfeed.

Carlson's previous book was his 2003 memoir, Politicians, Partisans, and Parasites: My Adventures in Cable News. It was published by Grand Central Publishing, an imprint of Hachette.