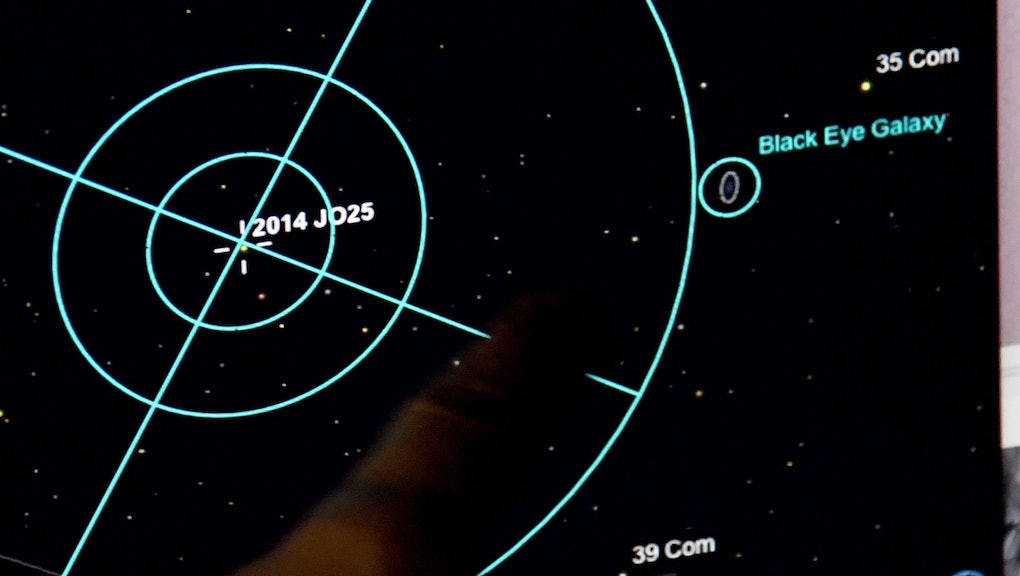 The "TERRIFYING" asteroid that flew by Earth was not a threat. Ignore the sensationalism.

On April 19, a whopping, lustrous asteroid called 2014 JO25 soared past Earth at a safe but visible distance of 1.1 million miles. This particular fly-by was impressive: "The encounter ... is the closest this asteroid has come to Earth for at least the last 400 years and will be its closest approach for at least the next 500 years," according to a NASA statement. "This will be a very close approach for an asteroid of this size."

Impressive. But did it burn through the atmosphere, threatening to crush and burn us all in a fiery storm of death? No. According to NASA, "there [was] no possibility" for the 2,000-foot space rock to collide with our dear planet.

That didn't stop the viral news industry from whipping up some ludicrous headlines about 2014 JO25. On Tuesday, six days after the event, Google searches for "asteroid earth" and "asteroid planet" resulted in top stories that looked like this.

"The MONSTER asteroid that could destroy a COUNTRY and WILL skim the Earth," warned Express. "Asteroid hurtles TERRIFYINGLY close to Earth — and was only spotted HOURS earlier," lied the Daily Star (NASA discovered it in May 2014). "Earth could be DESTROYED," said the Sun in a misleading related story. The articles come with terrifying artist's renderings of what it'd look like if a humongous asteroid really did fly directly into the planet.

Was there anything — anything at all — to fear about JO25? I emailed NASA, asking if people on Earth should have been afraid of the space rock and if there was any chance it could've destroyed a country. It sent back the statement from about two weeks before the fly-by, saying that the asteroid was simply passing by, not hunkering down.

For a second opinion, I emailed Paul Chodas, manager at the Center for Near Earth Object Studies. "There was, and remains, nothing to fear from asteroid 2014 JO25," he said. "The orbit of this asteroid was well understood when it was tracked extensively for the couple months after its discovery. ... There was no possibility of an impact."

We shouldn't just feel secure — anyone who loves science should feel excited. 2014 JO25 was a huge opportunity for NASA, Chodas said. "Astronomers used the fly-by ... as an opportunity to perform useful science." Its proximity afforded scientists the ability to collect radar imagery and a slew of other data.

Radar has been used to observe hundreds of asteroids. When these small, natural remnants of the formation of the solar system pass relatively close to Earth, deep space radar is a powerful technique for studying their sizes, shapes, rotation, surface features and roughness and for more precise determination of their orbital path.

"When an asteroid is getting close, we ping it with radio waves," Shantanu Naidu, radar astronomer at NASA's Jet Propulsion Laboratory, told Wired. "For this object, it took about 20 seconds for those echoes to come back, at which point we stopped transmitting and started recording the echoes."

So you see, there's nothing to be afraid of — unless useful scientific data intimidates you.