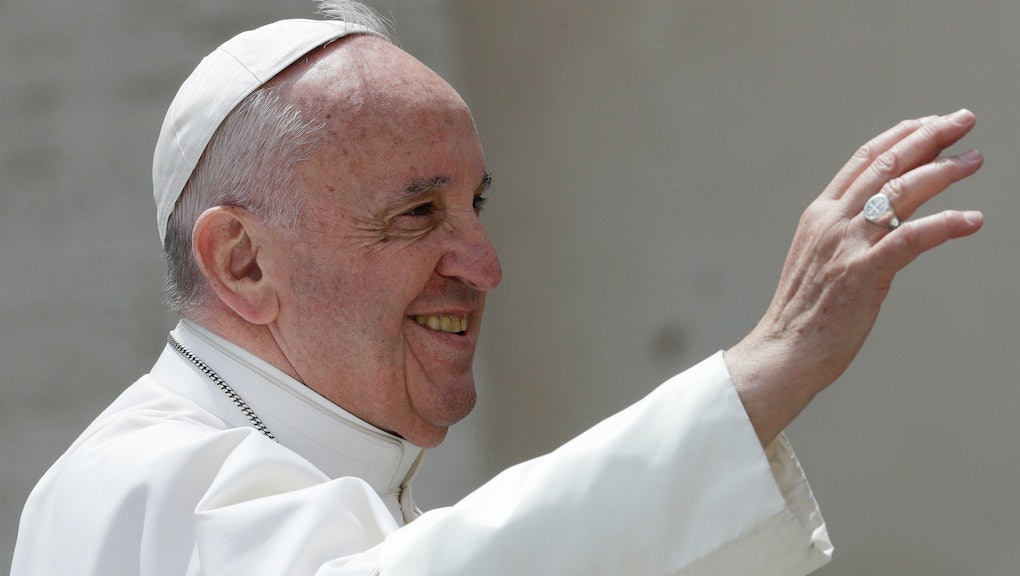 In a surprise taped address at the TED conference in Vancouver Wednesday night, Pope Francis called for a "revolution of tenderness" toward the most vulnerable members of society and for the powerful to act "humbly" or face ruin.

"Please, allow me to say it loud and clear: the more powerful you are, the more your actions will have an impact on people, the more responsible you are to act humbly," the pope said from his Vatican apartment. "If you don't, your power will ruin you, and you will ruin the other."

Here are the biggest takeaways from Francis' TED talk, the first ever given by a pope.

Francis began his address by connecting his own family's immigrant experience with that of migrants today "who face terrible hardships in search of a brighter future."

"I could have very well ended up among today's 'discarded' people," the pope said. "And that's why I always ask myself, deep in my heart: 'Why them and not me?'"

Francis then called for unity with those "discarded" people, invoking the Biblical story of the Good Samaritan to warn against leaving "entire populations ... on the side of the road."

"People's paths are riddled with suffering, as everything is centered around money, and things, instead of people," the pope said. "And often there is this habit, by people who call themselves 'respectable,' of not taking care of the others."

A "revolution of tenderness"

The pope said that regular people can be a "bright candle" in the "darkness of today's conflicts," urging what he described as a "revolution of tenderness."

"The future is, most of all, in the hands of those people who recognize the other as a 'you' and themselves as part of an 'us,'" he said. "We all need each other."

Power must be connected "with humility and tenderness"

While Francis spent much of the 17-minute address discussing the interconnectedness of all people, his strongest — and most pointed — remarks were directed at the most "powerful" in society, whom Francis warned to "act humbly" and to embrace tenderness and solidarity.

He went on to compare power to "drinking gin on an empty stomach" — "You feel dizzy, you get drunk, you lose your balance, and you will end up hurting yourself and those around you, if you don't connect your power with humility and tenderness," Francis said. "Through humility and concrete love, on the other hand, power – the highest, the strongest one – becomes a service, a force for good."