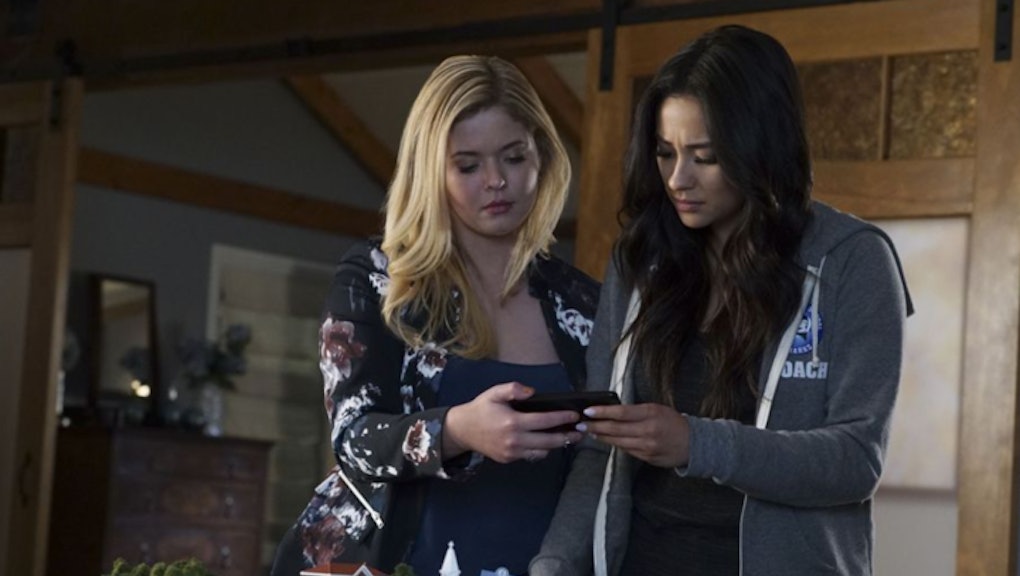 Who is Addison on 'Pretty Little Liars' and why is she on the show?

"These Boots Were Made for Stalking," the second installment of the final 10 episodes of Pretty Little Liars, was a frustrating episode as the writers chose to introduce yet another new character (along with bringing back some older ones whose presence in the series' final season remains inexplicable) rather than answer any of the numerous questions that remain from previous seasons. This week's newest resident of Rosewood is Addison, a snarky high school student and member of the swim team.

Entangled in an unexplained conflict with Emily, Rosewood High's newest swim coach, Addison's story took up a great deal of time in the episode and resulted in very little payoff. Played by Ava Allan, Addison bears a disturbing resemblance to Alison during her time as the town's Queen Bee: She has perfectly styled long hair, wears blazers to class and possesses zero empathy and a massive attitude problem.

Here's what we know so far about Rosewood High's newest mean girl.

1. She has an enormous problem with Emily.

We first meet Addison when she eavesdrops on Emily and Paige's conversation in the locker room (You would think after years on the team, Emily would know by now not to have personal conversations in public places that echo.) When Emily confronts Addison about missing practice, the student sassily informs her coach that she had a headache and then asks, "Are you sorry it wasn't a tumor?"

There's no backstory on where Addison's contempt for authority, and Emily in particular, comes from. She only becomes more disturbing as the episode progresses, threatening Emily after being taken off the swim team's lineup and then spying on Emily and Alison talking and hugging. After snapping a few photos, Addison lies to Paige, saying Emily has been making passes at her and other members of the swim team. So she wants to destroy someone's career for no apparent reason.

The episode also saw Jenna's return to Rosewood. The Liars are convinced that Jenna is the one behind the game's arrival, and, after watching the previous episode, it's clear that Jenna's involvement is undeniable. She's seen at the Brew, vocally instructing her phone to send a text — followed by Addison immediately receiving one.

We know Jenna had people do her dirty work for her in the past — remember Sydney Driscoll? — so is Addison one of Uber A's minions or is it possible she is the Big Bad herself?

It's worth noting that Addison is several years younger than the Liars, so how does she know Jenna? Is there an "A.D." Facebook group that recruits bored, tech-savvy sociopaths who like wearing black hoodies? Or maybe Uber A used a Craigslist ad?

3. Her initials are suspicious.

Her full name is Addison Derringer, so not only does her first name have the letters "AD", her initials are "AD." Hmm... If she is involved with A.D., or if she is A.D. himself/herself, could she be related to Alison? Then again, she has brown hair, so maybe she's a relative of Spencer? Did Mr. Hastings have another illegitimate child? Is he behind this all, solely responsible for creating this army of people who torture the girls? Was that the reason the man apparently couldn't use any forms of birth control? Does "Endgame" stand for him getting a vasectomy so his family tree can finally stop growing?

4. She's connected to the game somehow.

Emily is lured back into the game by Addison's threats, and "Liars Lament" provides her with evidence that will shut the teenager up: a video of Addison taking a bong hit with her boyfriend at the exact time she was supposed to be at practice. So Emily blackmails a teenager and then completely loses her cool, shouting at her about being a bully until Paige steps in to calm things down.

Addison apparently emailed a friend from the school computer lab bragging about getting Emily fired, and Paige has a copy of the email. Addison denies the accusations, and it does seem like a suspiciously sloppy move coming from such a calculating person.

After her exchange with Addison, Emily finds a puzzle piece in her mailbox that fits into the game. She then receives a text from A.D. that reads: "Embrace your darkness, Em. I've had to. That's how you win the game."

It's never a good move to place a bet regarding Pretty Little Liars, a show in which logic is defied about 10 times an episode. But it seems safe to expect that Addison will be back.